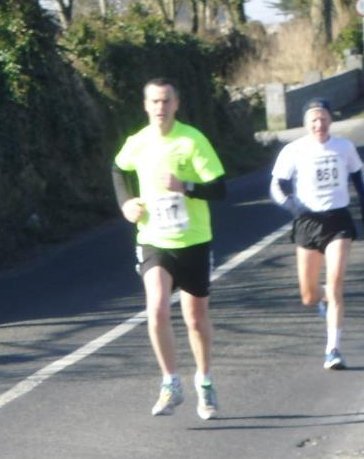 After running the Kilconieron 5 mile road race in 2012 I said I would never run it again. I found it difficult that day with heavy legs and no bounce in my step. It was one of those days, for whatever reason, running felt hard. I went home despondent with my time of 38.35 with many of my club-mates passing me out along the route.

One year on and the pain and self-pity of the 25th February 2012 are but a distant memory. I decided to give it another go as it was for a good cause.

I awoke on Sunday morning to a text from Tony Nevin saying that he had already completed the covert operation earlier that morning of strategically placing Craughwell 10 Signs along the course and that he didn’t need any help, this meant I could go back to sleep for more athletes rest.

As to the task of fuelling up for the race  porridge was ordered from the kitchen (thanks Cathrina). It was almost time to hit the road but first some performance enhancing energy drink (which if it didn’t kill me would make me run faster.)

I arrived at the race at 11.30 and noticed the new start and finish area. I indulged in a little bit of banter with my club mate Stephen Carthy as he had decided to marshal as opposed to run on the day. Number collection was smooth but the nerves were beginning to kick in (it wasn’t as if I was going to win it!)

I decided to warm up with a gentle jog and met some club mates and the usual friendly faces from GCH, Loughrea and Athenry. It was time for the start and we lined up amidst the usual messing and slagging. I had decided to wear the 2013 ‘electric yellow Craughwell 10 t-shirt’ which states “I completed the Craughwell 10”. The fact that I have never ran the Craughwell 10 was pointed out to me (a mere technicality I thought). You are in the over 45 category now Patrick was also pointed out to me. I decided to ignore this and try to get into my own zone for the race.

The race started and before long we began to climb as we passed the GAA grounds, but that was ok on fresh legs. “Enjoy being in front of me, it won’t last for long”, I heard, it was young Tony Nevin again. (I was aware that Tony had done a marathon the day before and if I was ever going to cross the line before him this was my day). That’s mean I heard someone say to Tony but it was said in jest. Quarter of a kilometre in and Tony is on my shoulder, he slowly pulls away as is to be expected and I see him catch up with Mike O’Mahoney and move off into the distance. I like to run my own race so was happy when Tony moved on. I checked my watch and saw I was averaging 6.45 per mile pace for the first half Kilometre – too fast I won’t keep this pace I thought.

A lady runner joined me for the third Kilometre and we ran shoulder to shoulder and spoke briefly but I decided that it wasn’t a good idea to run and talk, I must do one or the other but not both. I completed the third kilometre in 4.28 that’s 7.12 per mile pace.

For the fourth Kilometre you can see a long distance ahead so it was time to see who I could recognise from the Club. The only club mates I could still recognise were Mike O’Mahoney and Tony Nevin in the distance. I saw the water station and the rise in the road up to the water station. I decided not to bother with water and passed some runners out who decided to slow for water. I completed the fourth Kilometre in 4.19 which is 6.56 per mile pace. I felt comfortable, my average pace was 7.00 minutes per mile.

We left the forest road and ran back out onto the main road where I saw TJ Beaty ahead. I slowly caught up with TJ and moved slowly past him. It is unusual for me to pass TJ Beatty – I’m more used to
seeing his back. My pace began to slow as the undulating hills of this kilometre took their toll. I began to think of the day I blew up at this spot while doing a 13 mile training run with Diarmuid Quill and John
Flattery. The pace that day dropped below 7 minute miles as opposed to the 8.30 minute miles we were supposed to be doing. I completed the 6th kilometre in 4.28 which is 7.11 per mile pace.

Kilometre 7 and I am starting to suffer, the breathing is starting to labour. My son is doing swimming lessons at the moment and the breathing instructions are one, two, three strokes then breathe. I try this to see if it works for running, anything to distract my mind telling me to walk for a while. It doesn’t work. I look at my watch and my average mile pace is 7.05 and slipping further. A large green tractor passes which distracts the mind for a minute or two. I complete the 7th Kilometre in 4.42 or 7.33 mile pace. I start to think about the need for hill work as my legs are hurting now. I could hear Mary Porter by now on the pa system and was never so happy to hear anyone, I knew I was on the last leg of this race.

Kilometre 8 and its getting harder and harder just putting one leg in front of the other. I kept hoping the hills would disappear around the next corner. I started to think about what the race would be like if it was reversed. I would be running down this hill not up. Average pace per mile now slipped to 7.10 and I was passed by a guy with a beard. I had thoughts of trying to keep with him but I couldn’t. Shortly after that I could see the finish line and the supporters shouting which pushed me on. Val Fogarty shouts “come on Patrick” and I pass John Mac Sweeney who I think was my statistics lecture in college many years ago, unless I am mistaken. It’s over and the last kilometre took 4.43 at a pace per mile of 7.36.

Total time 35.49 with an average pace per mile of 7.10. Although a little slower than in Tuam, I’m still delighted to have taken 2.45 minutes off last year’s time in Kilconieron as it’s a challenging route.

Thanks to all those behind the Kilconieron 5 mile road race it was a great day with perfect weather for running. Hoefully I will be back again next year.