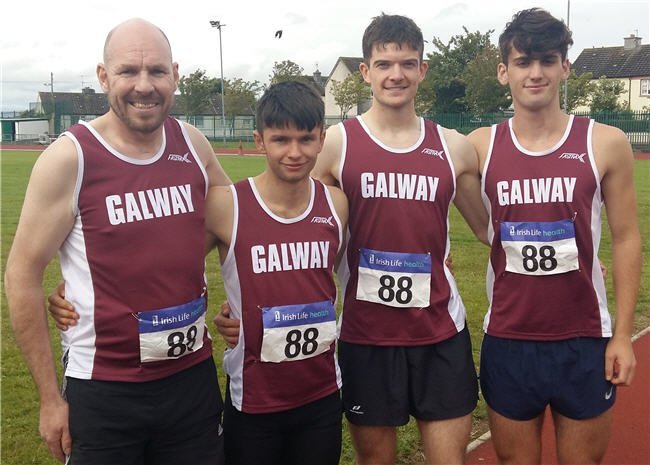 Several athletes from the club proudly represented County Galway in round 2 of the National League at the weekend where both men’s and women’s teams were in action in Templemore.

On the women’s team, Arlene Earls had a fine run to take 2nd place in the 400m in a time of 61.63, breaking Sineád Gaffney’s 5-year old club record of 62.41. Arlene also combined with Lorraine Delaney to help the Galway team take 4th place in the 4x400m in the Women’s Premier Division. Sineád Treacy anchored the 4x100m to 2nd place and also placed 2nd in the 200m with 26.04 and leaped 4.70m in the long jump for 3rd place. Maeve Curley strode to victory in the 1500m walk while Sarah Finnegan placed 4th in the 100m hurdles in 18.92 and 6th in the shot putt. Laura Cunningham took 3rd place in the triple jump with 10.25m in windy conditions while Lorraine Delaney leaped 1.50m to take 3rd in the high jump.

In the men’s events, Jerry Keary stole the show with a fantastic series of high jumps to leap 3 personal bests, breaking the 2 metre barrier for the first time with a clearance of 2.01m and continuing on to jump 2.04m on his 1st attempt and then 2.07m on his 3rd attempt and coming very close to nailing the 2.10m on his 1st attempt. His jumps easily claimed 1st place and for good measure he added a 2nd place finish in the long jump with a leap of 6.23m. Ben Garrard placed 3rd in the 800m with 2.01.14 while Gavin Cooney recorded 2 PBs with a time of 54.68 in the 400m and 2.03.29 in the 800m to take 4th place in each race. Oisin Lyons placed 5th in the 200m in 25.37, 4th in the 1500m and along with Ben Garrard and Gavin Cooney recorded valuable points for the team in the men’s javelin, discus and shot putt. Tuam’s Justin Lane and Athenry’s Patryk Woleniuk also contributed vital points to the Galway team with Justin in the pole vault, hammer and 400 hurdles and Patryk in the triple jump and 100m and both athletes combining with some of the aforementioned Craughwell athletes in the relays.

But more on Jerry’s remarkable series of high jumps. Not being biased or anything, but it was the highlight of the day for many spectators and athletes with the crowd really getting behind Jerry, giving him the Olympic hand-clap for a number of his jumps including the incredible 2.07 clearance. It’s a real good example of keep your patience and the big PBs will come. Jerry’s last PB in high jump was over a year ago in the Connacht championships and despite coming close a number of times since, it just didn’t happen on the day. And occasionally 1.85m caused problems a couple of months ago.

But patience, dedication and confidence are 3 of the most important attributes of an athlete and they all came together big-time for Jerry on Sunday in Templemore with what was just a crazy series of personal bests that very almost culminated in a 2.10 clearance. Jerry’s 2.07 ranks him 6th best amongst Irish male high jumpers so far this year and catapults him from unranked into joint 26th place on the Irish all-time list of male high jumpers. That’s’ 4 athletes the club now have in the all-time Irish lists with Cathriona Farrell holding 10th place on the women’s high jump list and Ann Loughnane and Maeve Curley 3rd and 12th on the race walking lists. And its boding well for other athletes also such as Laura Cunningham whose 11m triple jump from earlier this year puts her close to the standard for the top 50 all-time best ever triple jumpers in Ireland as does Ciana Reidy’s 2.40 in the pole vault at this year’s National U18s.