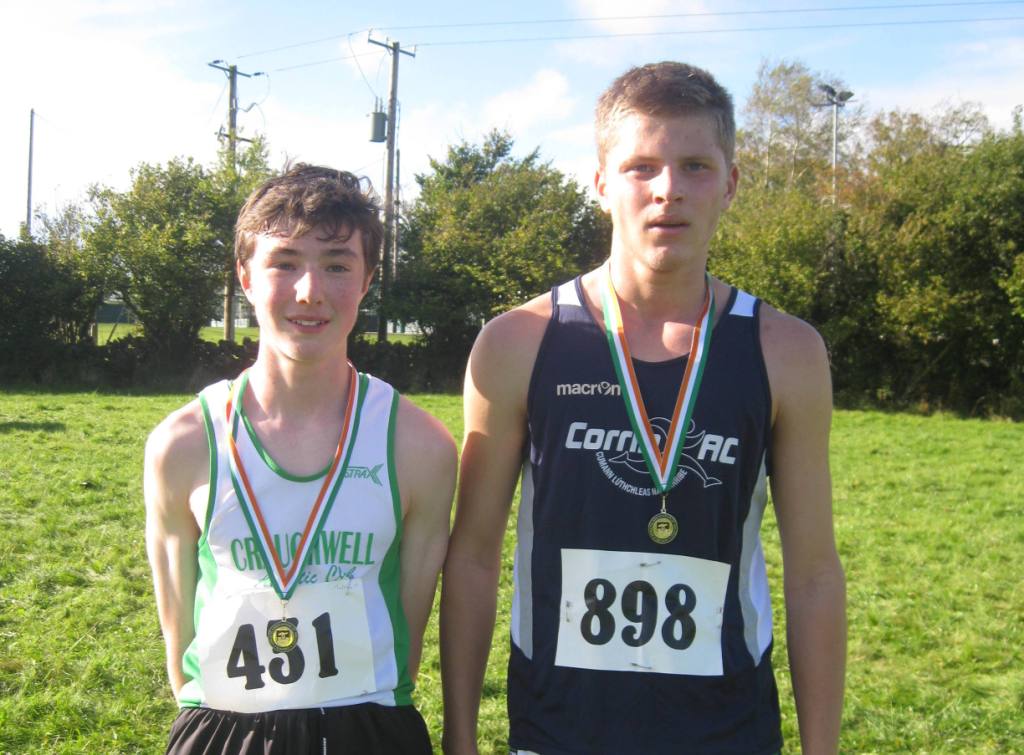 Craughwell AC hosted the Galway Cross Country Championships last weekend for the first time in 8 years, in Packie Martyn’s field next to the school and main road. On the last occasion 8 years ago, the top 2 in the U10 girls 500m were twins Michelle and Veronica Burke from the legendary Burke family from Ballinasloe. Today it was lovely to see both girls still competing strongly when they finished 2nd and 3rd in the U19 girls 4000m, with Veronica reversing the placings from 8 years ago!

Ellen Treacy had the honour of being the sole Craughwell AC athlete to compete on both days – placing 17th in the U10s 8 years ago and 5th in the U17s at the weekend. While youngster and Novice Men’s Champion on that day back in 2005, Mark Davis switched to official duties for the weekend and did the results recording!

Indeed, it was a doubly significant day for Ellen this time out as it was the first time ever that the club field an U17 Girls team in the Galway Cross Country Championships. The team were rewarded with team victory in their 3000m with Ciara Greene 2nd, Grainne McDaid 3rd, Ellen 5th and Miriam Lacey 6th. Fair play to Ciara who battled hard despite suffering a foot injury early to race and to Miriam who was running her first ever cross-country race. Grainne also had a super race, demonstrating a comeback to the form that saw her routinely feature on the podium in other years.

Well done to everyone who took part and a big thank you to all the people who helped out as officials.

Read on for details on the Craughwell AC performances on another exceptional day for the club.

The day kicked off with the U11 girls 1000m where a hotly contested race saw GCH take the team honours with Athenry 2nd and Craughwell 3rd. Craughwell were led home by an amazing performance from one of the youngest athletes in the race – U10 Emily Miskella who took the individual silver medal. Next home was Ava Finn with one of her best cross country runs to date to place 7th. Ava was followed in by Aoife Kelly 15th, Asia Clarke 19th, Emma Jane Moran 21st, Laoise Bond 23rd, Erin Dolan 29th, Iseult Connaghton 31st, Ciara Hughes 33rd, Ailbhe Doyle 38th, Niamh McSweeney 40th and Lauren McNally 41st. The club placed 3rd and 5th in the team event with 42 and 131 points.

The U11 boys were up next in their 1000m where the club excelled in an incredible show of strength which saw the club take 5 of the top 10 places and place 1st and 4th in the team event. Shaun Gilligan had a splendid run to take individual bronze with Sean Cotter and Gavin Lee hot on his heels in 4th and 5th. Blink and you’d miss the stream of Craughwell athletes crossing the line with Gavin Kelly next in 8th, Sam O’Neill 9th, Conall Doyle 11th, Liam Leen 14th, Jack Farrell 15th, Fionn McArdle 19th, Eoin Staunton 22nd, Niall Kennedy 23rd, Evan Grealish 25th, Oisin Davis 29th, Ben Fitzpatrick 30th and Sean Joyce 36th. The club took the gold in the team event with a low score of 20 points ahead of Athenry on 55 and GCH on 63 pts. In fact our second team came very close to medalling with a score of 70 points.

The U13 boys produced an even more impressive performance to take the team victory with 18 points ahead of Athenry on 32 and GCH on 62 with the Craughwell second team coming agonisingly close to taking a second set of medals with 65 points. A fine performance saw Adam Heneghan and Patrick Noonan take the individual silver and bronze. Unfortunately Adam suffered a mishap immediately after the race when something clicked in his knee causing him severe pain and he had to head off by ambulance for an x-ray. Thankfully it appears to be just a minor injury. The rest of the team finished strongly with Sean Cannon having a fine race in 4th place, Kyle Moorhead 9th, Cathal Walsh 10th, David Lee 11th, Finbar McFadden 12th, Sean Noonan 13th, Eanna McDaid 17th and Luke Roberts 23rd.

The club fielded an impressive line-up in the U15 girls 2000m with 9 girls taking to the field – I cannot recall such high numbers taking part at this age of cross country before. Dearbhaile Walshe led the team to silver medals behind GCH, taking 6th place individually. Caron Ryan in her first cross country race ever had a fantastic run to take 8th place overall while Laura Keane in her 2nd race ever did likewise with a 9th place finish. Sinead Kennedy completed the team scoring with a 10th, with Ciara O’Boyle 11th, Aoife Greene 12th, Fiona Commins 14th and Sarah Phillips 15th. It was a tough race for Aoife after a fine performance 2 weeks previous in Loughrea but suffered a pretty bad stitch halfway around this time. It was a baptism of fire also for Heather Greally who looks like she will have tremendous potential for distance running but the early pace of the race caught her and she had to pull out.

In the U15 boys, the team took the Galway title (a feat it has achieved every year) with Matthew Barrett leading them home in 4th place, James Cahalane 5th, Conor Lee 7th, Brian Loughnane 9th, Luke Finn 10th, Gavin Forde 11th and Jerry Durkan 12th. It was Jerry’s first race and he did brilliantly to recover strongly after a bad patch midway through the race.

In the older races, Damien O’Boyle took the Galway title in the U17s a feat he last achieved as an U14 in 2010 while Oisin Doyle stepped up an age to take the bronze, with Diarmuid Harvey placing 5th.

Matthew Moran had a very impressive run in the U19 6000m to take the gold medal, adding to the U18 title he won a week ago. Matthew is running very strongly and these titles are just reward for a very dedicated athlete.

Provisional results of yesterday are attached below, together with some information on participation rates and Galway Juvenile Cross Country Champions from the last 10 years:-