Had some nasty suspicions that the fine evening might bring out the fair weather runners, but were bowled over by the crowd of over 475 that participated this evening.!!  We hope you all had as enjoyable a run as possible over our pretty testing course.

As anyone who finished between 26 and 27 minutes will have noticed, we found the numbers challenging to cope with at times but luckily we have a good video so will be able to get quite accurate times for all of you.  Sincerest apologies if the cramped finish affected your enjoyment of the race.  We are already planning a redesign of our chutes for next year to make sure this won't happen again!

First home for the men was the legendary GCH warrior Jerry Ryan who improved on his time of last week by posting a 15:34.  Speaking to Jerry afterwards he said that he found it tough going and that the course had lots of bumps that he "wouldn't have noticed if he was fit".  Jerry's time is a new course record and we would like to congratulate him on this achievement.  It really was brilliant to have an athlete of his stature run in the race.

Jerry was followed by Mayo AC top runner John Byrne in a fine time of 16:05.  Third home was last year's winner Conor Maloney in a great time of 16:18, almost exactly what he posted last year in what kicked off a super year of running for him.

First lady was (surprise surprise) Regina Casey (GCH) who cruised in at 18:33.  She didn't have it entirely her own way this time and was trailed close by Loughrea's Caroline Clancy (18:49) and Katheryn Casserly of Castlegar AC (18:53). 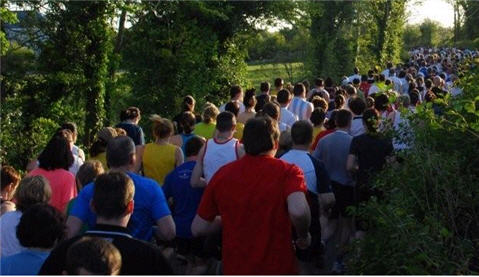 Results updated with more accurate times. There were a few glitches with the original results due to some typos and mixups in chute, etc.  It should have been righted below.