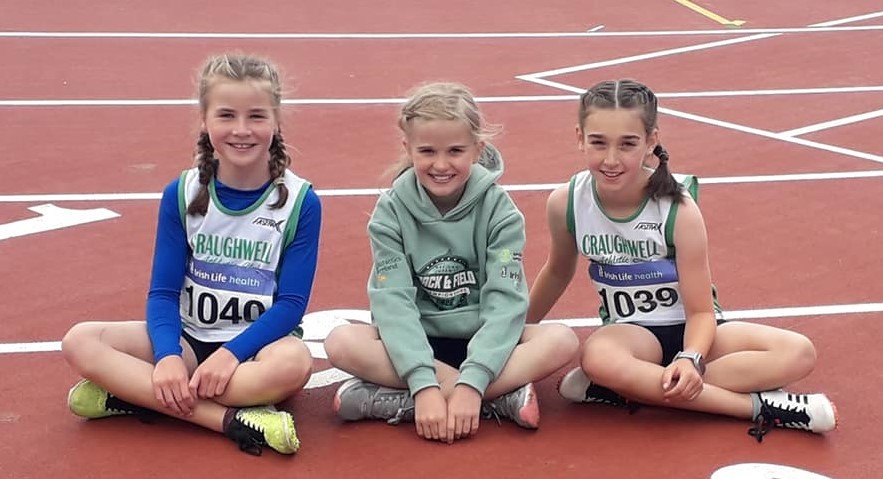 The first of three weekends of National Track and Field championships took place in Tullamore last weekend and there were some exceptional performances from the Craughwell AC Athletes who qualified via the Connachts.  In all, the club recorded 4 Gold Medals, three Silver and a Bronze. Many athletes were unlucky to not win a medal, with a couple of 4th place finishers and several in the top 5.

The highlight performer of the weekend was the exceptional u15 Conor Penney who won double-Gold, taking National titles in BOTH the 80m hurdles and the high jump.  The magnitude of this achievement can’t be overstated – going through the results I think Conor is the only double-champion on the day.

In the hurdles, Conor secured automatic qualification finishing 2nd in his heat with a time of 12.98s.  He absolutely dominated the final, getting out to a blistering start and by 60m it was all over with Conor finishing well clear in 12.34s.  Later in the day, Conor competed in a thrilling high-jump competition where he recorded two personal bests and broke the National Championship record twice to clear 1.88 and take the title. It was a riveting performance where Conor cleared all heights from 1.60 to 1.80 cleanly. With only 2 jumpers left at that point, Conor clipped 1.85 on his first attempt as did his competitor Ryan Onoh from Leevale AC in Cork but both athletes cleared on their 2nd attempt to break the old Championship Record of 1.83. Up to 1.88 and Conor had a majestic first-time clearance to take the title to the wild cheers of the watching Craughwell supporters.

Alan Hallinan also won the sprint hurdles Gold and came very close to securing a double-medal.  In the 60mh hurdles, Alan won his heat in 10.42, but absolutely blitzed the final with a superb 9.99s to take a clear win.

Joshua Whyte leaped to a massive personal best in the u15 boys triple jump to win Silver with an 11.02m clearance.  Emma O’Donovan made it a special day for our jumpers leaping 1.45m on the first attempt to win Silver in the High Jump.

Rachel Warde qualified as 3rd from her heat of the 75m hurdles in 12.23.  She left it all on the track running hard all the way to a fantastic Bronze in the finals in 11.83s.  Jade Moorhead came 5th in the 100mh final with a superb 17.69s clocking.

In the middle distance, there were some breakthrough performances.  Alan Hallinan was very close to a second medal as he finished 4th in the 600m with a fine 1:40.9.

Claudia Coyle ran an exceptional personal best of 2:27.5 in her u14 800m heat to finish 7th and make it through to the final.  Claudia ran a mature and intelligent race in the final to finish a fantastic 6th overall in 2:28.6.  Declan O’Connell came 3rd in his heat of the u15 800m in a personal best of 2:08.7 to secure his spot in the final.  In a tactical final, Declan finished 4th in 2:12.1, gaining on the 3rd placed runner all the time on the finishing straight but just ran out of track. Aeveen Kelly ran a fine 2:31 in her 800m heat, but just allowed a gap to develop to the leading pack at 200m which she could never quite close and she didn’t make it through to the final on this occasion.

On Saturday, it was the turn of the u9-u13 athletes and they had a rollercoaster of a day.

The highlight of the day was the fantastic gold medal winning performance from the U12 Boys 4x100m team in one of the last events of the day with a splendid final to take the National title with the team of Sean Colleran, Lincoln King and the mighty McNena’s Ciaran, Ruairi and Jack – an incredible achievement for 3 brothers to be on the same victorious squad at National level with Ciaran and Ruari running on the team and Jack a sub. The boys are first-cousins of Craughwell AC legend and former 800m club record holder Paul Joyce so it’s in the blood!

Conor Mannion and Jack Hibbitt put in storming runs in their 500m to combine to take the National silver in the team competition.

Some of the same athletes had outstanding performances earlier in their individual events where there were PBs aplenty with Ruby Maher and Laoise Colleran sprinting to personal bests of 9.47 and 9.68 in the U11 Girls 60m but just outside the medals in 5th place with a combined time of 19.15s – only 8 hundredths of a second from taking the Bronze. Ava Burke and Cerys Johnston had super performances in the U11 long jump with Ava PBing with 3.07 and Cerys likewise with 3.34 – their team placed 7th. Oisin O’Donovan leaped to a 4.62m PB to place 6th in the U13 long jump.

Lincoln King had a fine run in the U12 Boys 60m, making the final and finishing 5th in a time of 8.78. Oran Gillespie and Cathal Niland were in super form also with an 8th place finish in the U9 sprint in a combined time of 20.49. Kate O’Leary leaped a fine 1.25m in her debut at National level in the high jump, having earlier ran an impressive 9.23 in the U12 60m. Alan Hallinan leaped 4.36 to place 11th in the U13 Boys long jump. Sean Colleran cleared 1.15m to place 12th in the u12 Boys High jump.

Our U12 Girls relay team of Adele Casserly, Kate O Leary, Grace Drysdale and Sophie Meehan  with Robyn Barry and Grace Mc Nally set out to better the qualifying standard they set in Galway and they did that with smooth transitions and good running.

Aaron Burke and Gerard Murray placing 6th in the U10 Boys in the Turbo Javelin with a combined throw of 30.26m, Abbie Machaj and Isabel Maher 7th in the U9 Girls with 19.36 and Harry Bryne and Cathal Niland 7th in the U9 Boys with 23.66.