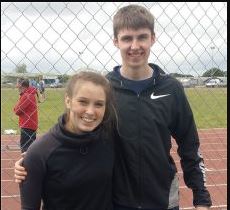 The long-awaited National Senior championships took place in Santry this weekend and saw some historic results for Craughwell AC athletes. The standards are always sky-high, and they are rising in many events so the weekend provided the usual mix of joy and agony!! Mike covered Laura’s fantastic long jump progress in another article so this one focuses on the running!

First up in the 1500m on Friday night Jack stepped into the arena to take on the best in the country on one of the hottest disciplines in athletics at the moment in Ireland and worldwide. To my knowledge this is the first time anyone from the club has made the final of a national 1500m (not sure that’s right, but I’ll put it out there and someone is sure to correct me!!). It was an absolutely brilliant race from Jack – and interesting enough that it’s worth breaking down a little with a few stills and captions to cover the decisions he had to take to qualify!

The race started off fairly typical – brisk through 100m and then settled into a 63-64 second lap pace. After the first lap and 3/4 Jack was drifting towards the back of the lead group, but nothing too concerning.

Decision #1: As the field passed the 800m mark in about 2:08, Jack took a decision and moved up. The math was simple – he was surrounded by faster athletes, so his best hope of qualification was to make it a fast race. This would maximize the number of qualifiers to come from his heat. He took charge of the race to keep it fast and honest. Being the rabbit is a tricky thing to do mentally as it means that you run a high risk of psychological collapse when the hard-hitters come at you.

Decision #2: Don’t panic when overtaken by the pack! The hard-hitters kicked into gear at the bell and flocked past Jack – evergreen Eoin Everard leading the charge, followed by NCAA Charlie O’Donovan, the brilliant Cathal Doyle and others. As the pace pushed, the group of 4 seemed set to drive off – with a good sized gap forming on the rest with each stride.

Decision #3: Speed up when you feel like slowimg down! This was the most pivotal point in the race – all instincts when passed like this are to hang on and defend your position and try not to collapse further. Jack was very aware of the importance of time to qualification and he drove back at the pack and amazingly managed to re-join them at the bend. For a moment it looked like he might grab an automatic qualifying spot but the lead 4 surged again on the home straight and he dove over the line for a fantastic 3:56.92 5th and second fastest time qualifier to one of the best national 1500m fields assembled. A brilliant run!

Jack backed it up in the final with a solid run in an incredibly tactical race. The final was a cracker with favourite and likely olympian Andrew Coscoran winning the last 400m sprint in style. Jack finished 15th with a 4.03.84 time.

Running is full of magic round-number targets – the four minute mile, the 3 hour marathon, sub-4 1500m, etc. In 800m running, the barriers that mark you as a serious runner are 2:00 for men and 2:20 for women (these times are more or less equivalent). Sinead last broke the magic 2:20 in the national indoors in 2018. She had never broken it outdoors, but held the senior women’s outdoor record of 2:20 for over five years.

After some consistent training last year she got back into 2:20 shape running 2.20.x on two occasions and was confident of removing the monkey from her back in the national seniors. She did grab a pb – managing to improve it slightly to 2:20.32, but still the wrong side of the barrier!

That run finished this weekend as Sinead ran a brilliant race to finish with a super PB and outright club 800m record of 2:18.53. The race went out at a phenomenal pace with Irish indoor record holder Georgie Hartigan dragging the field through 200 in 30 seconds. Sinead hit the bell at 67 seconds – faster than I’ve seen her before. Typically in 800m running, the second 400m is 2-3 seconds slower than the first, but the faster the start, the bigger the difference. Sinead closed with a 71 to knock close to two seconds from the old club record. Great running! The club records have been updated again – the 4th or 5th time this month!!

Sinead Treacy so Close in the 400m as Brian PBs

After her incredible club record-breaking achievements of last weekend, Sinead Treacy had every reason to be optimistic heading into this weekend’s action. Sprinting is a game of tiny margins and if you feel in any way flat there is little room for error. She ran a fantastic 57.70 for 4th in her heat but unfortunately it wasn’t enough to make the final (her time from last week would have made the final – such are the cruel margins!).

Brian Malone from Ronnie’s Sprint group made the trip the big smoke and was also a little disappointed to not get close to his personal best on the day. Brian ran a fine 59.48 but learned a lot from the experience and is sure to hit his M45 target of 56/57 seconds before long.

Jamie Fallon took the leap back to the track and signed up for the 5000m. Jamie recently ran 8:52 for 3000m and ran 15:14 on the road so was looking to get close to 15 minutes. As Jamie is just getting back to fitness we were a little surprised to see him in the “A” race which was absolutely stacked with a murderer’s row of talent! With Sean Tobin in the field there was never going to be a chance of a tactical affair.

Jamie tucked in but immediately felt flat – 12.5 laps of a track with a field of assassins is a long way to go when you aren’t feeling 100%. He did brilliantly to hold it together and run a fine 15.42 – well off his personal best and ability, but still a solid effort! Onwards and upwards!