With no Juvenile Championships taking place in 2020, we have seen more Juveniles than ever stepping up to both the Senior and Junior all-Irelands.  Yesterday in Santry we had 5 athletes competing over the “metric mile” distance of 1500m and incredibly ALL of them finished in the top 10 of the big talented fields.  It is really a dark art to get things right for championships, and usually we get it wrong for someone – however for our middle distance crew it was one of those unusual days where everyone had a good day.  We saw a new Club Junior record and almost everyone had significant personal bests and almost a stunning national medal from Kyle which would have put the icing on the cake.  We also saw some excellent performances from long-jumpers Alicia Larkin and Leanagh Gilligan in the Long Jump and Freya Bohan in the 200m who also scored a fine new personal best.

Direct links to the event videos are here and report below:

With most not competing until 6:20, in our journey planning, the first milestone was to make Applegreen in time to watch Emily Miskella take part in her 1500m at 3:30.  There was a lot of cheering in the car park as she delivered a show that fired up her teammates and set the tone for a great day!

About 18 months ago, Emily had a breakthrough run in the National Indoors to run an incredible 5:03 and score in the top nationally 7 of her age group.  Right after that race she set a goal for herself to break the magical 5-minute barrier – it would not be easy!  This is faster than 3:20 per kilometer which is fairly moving – just try it!!  The club Junior outdoor record of 5:02.03 set by the talented Linda Porter has stood for an incredible 13 years which shows how hard it is to do.  The form after lockdown looked good with a 3k pb of 10:49 in Ennis and a comfortable 800m pb of 2:26 in Ballina showing that she both had the necessary endurance and speed.

Emily stuck gamely to the plan – slotting in where it suited and moving up when the clock showed it necessary to hit her goal.  Especially impressive was the brave and difficult move at lap 2 to bridge the growing gap from the main pack to the breakaway group of 3.  As the laps ticked by it was clear she had it in her grasp – passing the 1100m mark at 3:38 (two seconds to spare) and pushing out a cracking last lap of 78 to finish in 4:56.75 – a full 6 seconds under the old record and a fantastic 3rd in her heat.  The second heat was run faster than the first, and ultimately she didn’t hold onto her 3rd place position but a brilliant day and so satisfying to set a target and achieve it! An appreciating crowd of teammates roared at their phones 40 miles away in Applegreen carpark, and all around Craughwell!!

CLICK HERE to take a look at Emily’s race with brilliant commentary!

Craughwell Takeover in the Male 1500m

About 3 hours later, it was the turn of our male milers.  This was again run over two heats and the Craughwell lads found themselves split into different legs based on seedings, personal bests and guesses. The poor soul doing the seedings asked that they not make him look bad and they did their best to disobey!  Knowing that the heats were to be decided on time, Oisin Davis took an early lead from about 150m and pushed to the front with an honest hard pace – no room for tactics here!  As they hit 800m in about 2:10, clubmate Patrick Noonan had moved up to share in the lead and turn it into a cracking race between the two good friends.  By the bell, Patrick had a lead of about a metre and a Waterford AC runner edged up on Oisin’s heel – the hillarious stream commentators noted that Oisin woke from a “stirring dream” and he jerked into life to put in a really strong last lap of about 62 seconds and finish with 4:07.74, and Patrick just a hair’s breath behind in 4:08.02.  This was a huge 7-second pb for both men and gave themselves a realistic chance of medals depending on how the next heat played out. 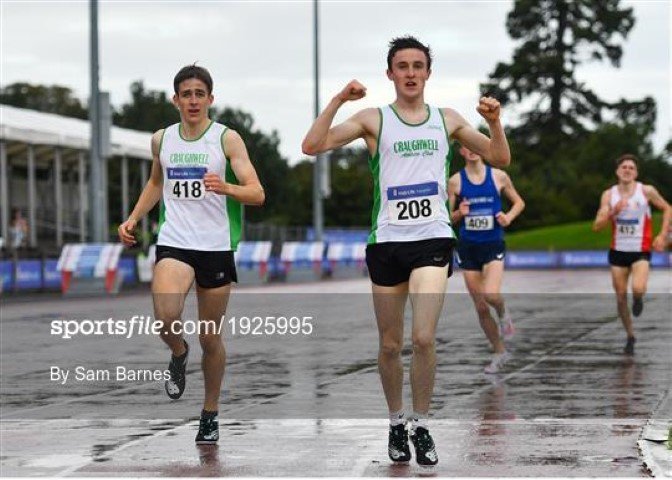 In the second heat, the talented trio of Tadgh Donnelly, Sean Donoghue and Michael Morgan were the outstanding favourites, however we came so, so close to a Craughwell AC athlete getting among them.  Kyle Moorehead and Sean Cotter were rightly seeded in this faster heat and were involved heavily in the action throughout.  Kyle has been in ferocious form this year, as evidenced by his superb new club outdoor 800m record and a fast last lap suited him down to the ground.  In a fantastically quick last lap of 61s, Kyle seemed to be storming to 3rd until an accidental tangle with the man ahead of him took away his momentum.  Try as he could he couldn’t quite get another surge going, but he ended up with a superb 11-second pb of 4:03.68 – lots more to come!  Sean got slightly boxed in and caught in traffic but the surge in pace was also challenging – however he always delivers and held on to finish with an excellent 4:08.09, just two seconds outside of his personal best. 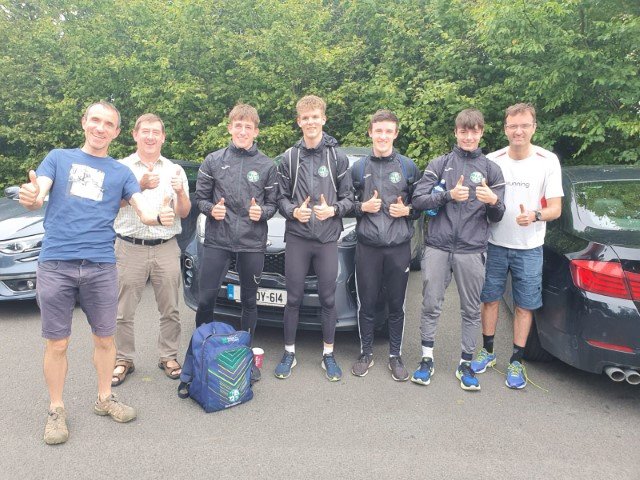 All the lads and support team before their race!

CLICK HERE to take a look at the lads races with brilliant commentary!

Jumping up a storm

It has been impossible to get competition practice in the jumping events in 2020 but Leanagh Gilligan and Alicia Larkin performed very well, leaping to 4.97 and 4.77 to finish 10th and 11th respectively in an exceptional field.  Not personal bests on this occasion, but fine jumping in a crazy year!  The stream coverage of the field events was spotty but some of the jumping action can be seen from this point on if you click here!

Freya Bohan set a fantastic new 200m outdoor personal best blazing to a 27.71 which was good enough for 4th in heat 2.  This has been a horribly tough year for sprinters so for the popular Craughwell AC athlete to claim a personal best in one of your only blow-outs of the year is really an excellent achievement!!