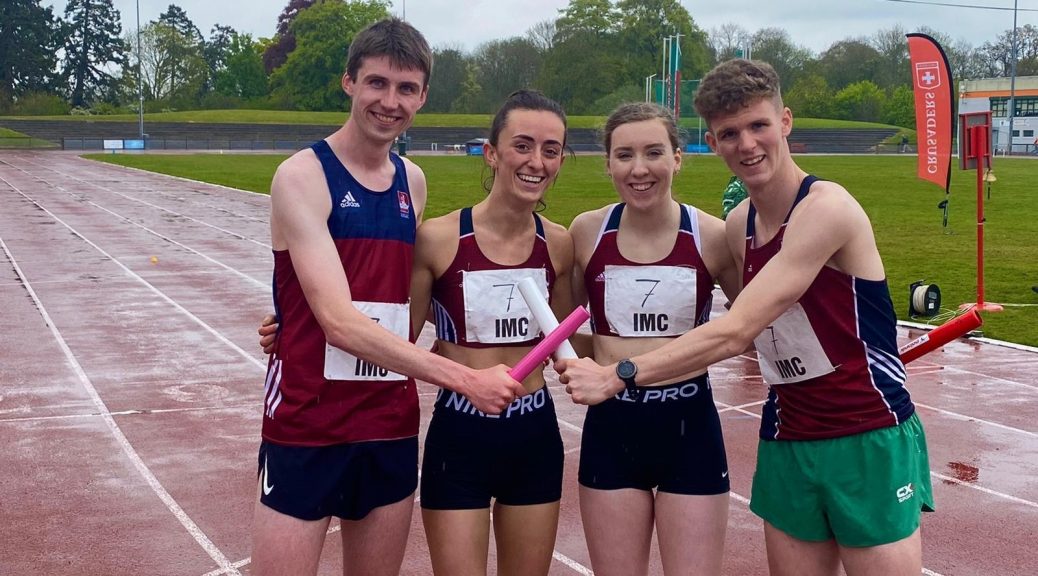 On a soft day in Santry there were some fine performances from the Craughwell Crew in the IMC Dublin on Saturday. Highlight performance was probably Seán Cotter smashing Jamie Fallon’s 8 year-old Club Junior 1500m record with a cracking 3:58.54, closely tailed by Kyle Moorhead who ran a PB 3:58.88. Seán ran a smart race and worked from the back and made all the right moves – crossing 1100m in 2:57 and finishing with a strong 61s final lap, with Kyle following his slipstream. Watch the race below.

Caron Ryan made a fine return to action with a super outing in the 1500m, finishing with 4:48.65 – a little off her personal best but getting there rapidly in her first race over the shorter distance in a few years.

Jamie Fallon wasn’t too upset at losing his Junior 1500m record as he nabbed a track 5000m personal best of 14:56.50 – just a shade outside William’s club senior record. This time is good enough to get Jamie into a high quality track meet in Belgium in a few weeks where he will have another pop at the record.

To round out there day, there was a high quality mixed distance medley relay – Craughwell didn’t have a team but the NUIG team featured 3 of the gang so were basically Craughwell!. Kyle Moorhead led it out with a superb 1200m in 3:15, handing over to Sinéad Treacy who covered the 400m in 57s and passed to Rachel Hughes of GCH – after a cracking 2:18 leg in the 800m, Jack Miskella found himself in the lead but with UCD’s superstar Luke McCann on his heels – Jack surrendered the lead but covered the 1600m in a brilliant 4:26 to put on a great show.