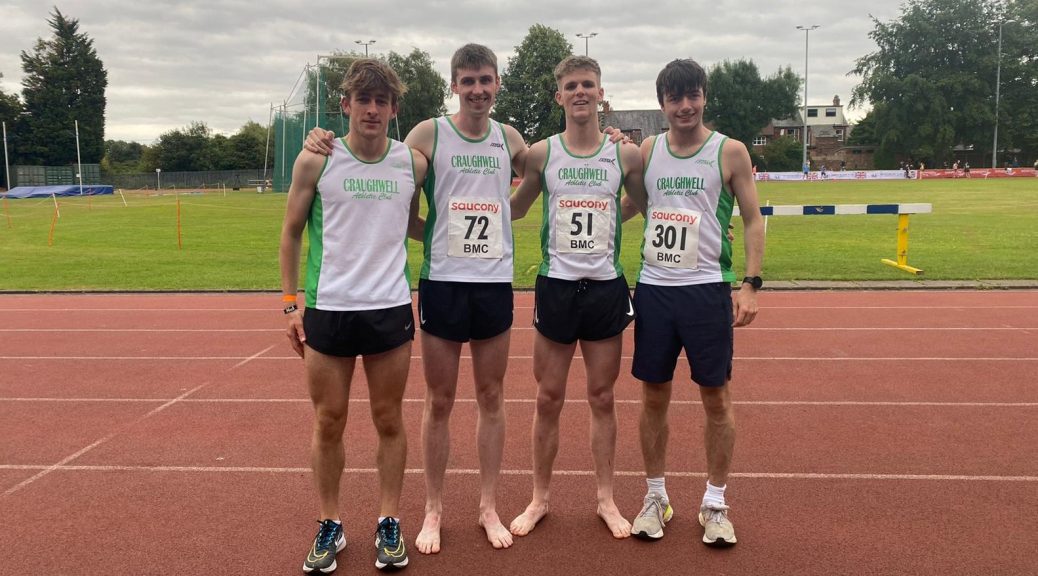 There must have been something in the air this weekend! On the weekend when the curtain fell on a fantastic world championships in Eugene Oregon with incredible world records shattered in 400mh, 100mh and Pole Vault, our own Craughwell AC records were being re-written left and right here at home! In all we saw new 400m, 800m and 5000m Junior records and a record-equalling performance in the 200m!

On Saturday, four brave Craughwell AC athletes made the journey to Manchester to compete in the elite British Milers Club track meet in Trafford.

The BMC events mostly consist of graded events where people quest for personal bests in paced races. Typically the entry standards are very high and they provide an excellent platform for athletes to push new boundaries and master their craft. The value of the events in developing young athletes was highlighted by Geoff Wightman, the coach/father of Jake in his first tweet immediately following after his son Jake’s famous 1500m win against the great Jakob Ingebrigsten on Tuesday night:

Patrick Noonan was up first in a 3000m Steeplechase stacked with quality. This event was not graded so he was up against lads chasing European standards. Paddy is still learning this technical and challenging event but set a new club record of 9:28.35 following two hard kilometers and fading but holding it together for the end. Patrick learned a huge amount from the experience and from watching how the more experienced athletes approached the race and the barriers. He felt that by the end of the race he was taking the barriers better than at the beginning! This pb marks the end of a long season for Patrick, his best ever so he will shut it down now before building again for the cross country.

In the 800m, there was another great run from Kyle Moorhead who broke his own club 800m record in the “F” race (same as Wightman credited!) with a 1:54.01.  This was the strongest 800m I’ve seen from Kyle – he looked for all the world like he could win his race but one athlete cut in (legally) with about 150m to go and it checked Kyle’s stride so he lost some momentum. It was a great time but I really feel watching the race that he was capable of running much faster with a less eventful race and regard this as a real breakthrough run – 1.52 is the new goal!!.

Running In the “G” 800m race, Jack Miskella found himself quickly in the chasing pack as the pace at the front was ferocious and split the field. As the gap between the groups increased, Jack dug deep and took it on himself to bridge the space, which he duly did. He ran strongly all the way then with the lead group to finish in 1.55.05 – a new personal best for Jack and he also definitely looked like he could have gone even faster had the race played out a little differently.

Saving the best till last, Sean Cotter came in with a personal best of 15:08 and the race was seeded for 14:30 so he played it conservatively – running at the back of the large field for the majority of the race – the last thing you want to do in a 5km is go out too hard. The plan was to run 71/72s laps for the first half and to push on then in the latter stages of the race if the tank allowed. Unfortunately the stream died when it came to the last four laps but the text from Kyle was straight to the point: “14:55!! 67 last lap – Took a lot of bodies”. 14.55.56 is a whoping EIGHT SECONDS off Jamie Fallon’s 2014 Club Junior Record and a cracking 12 second personal best.

It’s great to be young! 27 minutes after Sean stepped off the track the lads were through security in Manchester airport. They had tickets for the match so stayed in Dublin where they met the elite DTC crew including Andrew Coscoran fresh over from Oregon for their long run. Only in athletics can you be cheering for your heros on TV on Monday and bumping into them by chance and joining for a run by Sunday! Oh to have the energy!

AAI Games: Sinead, who else?

The combined events competition also included the AAI Games meet. This is a little like the AAI’s version of the BMC events except that the promotion/advertising or perhaps the date or something seemed to be off this year as it saw very poor support.

Sinead Treacy contested the 200m and ran a club record equalling 24.85, however the wind of 3.4 m/s was a little over the legal limit.

On Sunday however, Sinead Treacy went one better, smashing the club 400m record with a marvellous 55.89s, her first time under the 56 second barrier! What an athlete!!

Sinead Gaffney competed in the 800m, running a fine 2:18.11, a fine run on a windy day. Sinéad was due to run the 1500m on Sunday but based on the poor turnout on Saturday decided against it and didn’t run.