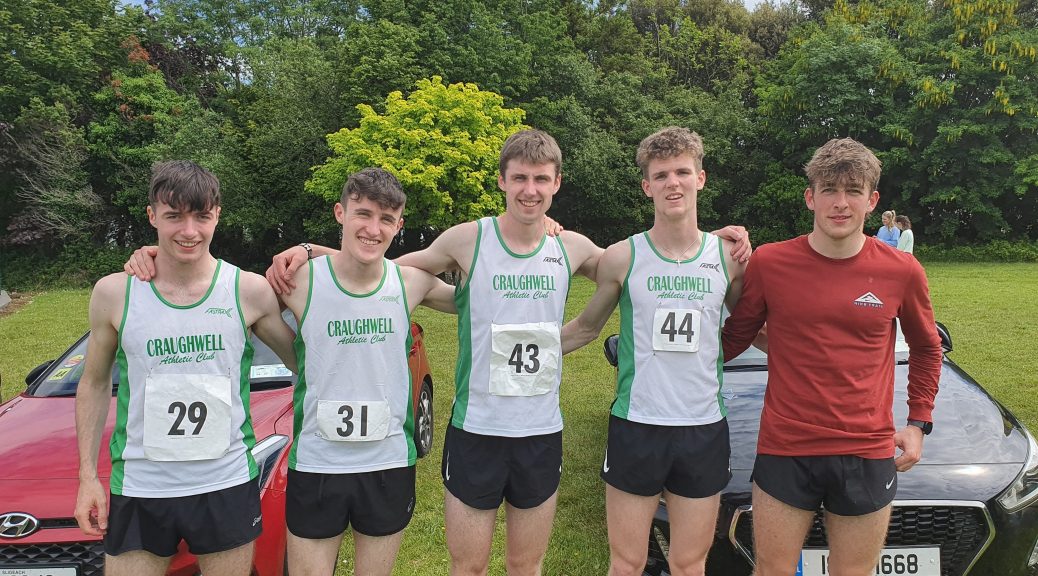 The weather was absolutely stunning on Monday in Dangan for the Junior and Senior Outdoor Track and Field Championships which saw fantastic performances from Craughwell AC Athletes throughout the field winning a total of 35 Medals – 16 Gold, 11 Silver and 8 Bronze.

“Miskey” breaks records in Men’s 800m classic
Spectacle of the day for many was the Men’s 800m race which featured the most stacked 800m field we have seen in Connacht in my memory – it was set to be a barnstormer and didn’t disappoint. It saw an incredible FIVE athletes break the magical 2-minute barrier and Craughwell AC take the win in the Senior and first three spots in the Junior.

Jack Miskella was the only man brave enough to stay within range of the ambitious 1.53 pacer in the first lap and kept his focus as challenger after challenger came at him in vain. In the end Jack could rightly punch the air as he crossed the finish line with a superb new 1:55.64 Club Record in probably his finest run to date. Jack’s closest rival on the day was previous Club Record holder Kyle Moorehead who put on an awesome surge from 400m to pass the classy Keith Fallon and Aaron Brennan of GCH and come right up to Jack’s shoulder but didn’t quite have enough in the tank to keep his challenge going past the bend.

Kyle Finished with a stunning 1:56.32 personal best and club Junior record for second on the day and first Connacht Junior, not a bad way to (temporarily?) relinquish your overall club 800m record! Next home for Craughwell and second Junior was fellow leaving-cert student Sean Cotter who set a blistering new personal best with 1:58 – a FOUR Second Personal Best! No assessed grades needed for leaving cert students in their 800m! Oisin Davis came next as third Junior in 2:01.66, 1.5s off his pb but a solid outing. Watch the race below:

Jamie and William battle over 3000m
The second heat of the 3000m was also fairly stacked. Jamie Fallon worked from the back to join Thomas Devaney at the head of the field for the first two kilometers where they worked well together. William Fitzgerald likes to settle into races and he left a gap develop over the early stages which he reduced but could never quite close. Over the last Kilometer the classy Devaney started to inject more pace and broke clear of Jamie. Jamie hung on gamely to finish second in 8:52.40 – not a PB but a very respectable run. William closed strongly to finish 10-seconds back in 9:02.31 for 3rd, also a bit off a PB but a very strong first outing.

Ross McGuinness had his mind set on not going out too hard and raced smartly to close in 9:31.52, passing many on the home straight and winning Silver in the u20 category. Definitely much more to come for Ross as he gets the balance of speed and pacing right!

In the men’s 1500m, Gavin Cooney had a storming run to close in 4:20.62 to finish as second Senior. Patrick Noonan did all the early work and led the field into the breeze to keep things honest to the first three laps, but as the things approached the business end the inevitable wave came and he got passed by a few others to finish as 3rd Senior in a fine 4:22. Luke Burke ran a conservative race but closed nicely to finish with a nice kick to close in a personal best 4:31.25 for second Junior. Mark Davis didn’t disgrace himself to win the Masters 1500m with a 4:32 clocking.

Need for Speed as Sinead and Ronnie’s gang deliver in style
Sinead Treacy delivered another master class of long-sprinting with a fantastic 57.41 to clinch the Connacht Senior race in convincing fashion, just ahead of Laura Nally of GCH. Arlene Earls finished in a fine 61.60, Jade Moorhead in 64.10, Lorraine Delaney in 66.15 and Hannah Whelan in 66.17.

The 200m and especially the 100m saw a huge contingent and some great performances from Ronnie’s Speed Group.

John Walkin led them off with a fine win in his heat of the 200m in 26.24 to finish first Master on the day.

Ever the inspirational leader, Ronnie competed as a Senior and led the way for Craughwell in the 100m, driving hard to a solid 12.12 season opener, good enough to win Senior Bronze. Cormac Kearney is showing no signs of losing any pace as he won the Masters 35s category with a superb 12.33. Ryan McDonnell had a smashing breakthrough run in 12.72s to come home next. I think this is a PB for Ryan and he looked very comfortable doing it.

David Mulligan and John Walkin finished first and second in their heat in 12.76 and 13:00 respectively. Evan Morgan won the M50 with a fine 13.98 effort.

The High Jump produced one of the highlights of the day with a stunning 1.83 Clearance from Lukas Schukat to win the u20’s Jump. This is a massive personal best for Lukas and bodes really well for his season as he was stepping up a few age groups here. Lukas also performed well in the triple jump with a 10.70 clearance for 2nd and the Long Jump with a 5.16 Silver medal. Andrew Power was 3rd in the Long Jump with a clearance of 4.70m.

In the High Jump, Craughwell Junior ladies performed excellently, finishing with 4 of the top 5 finishers. Saoirse Pierce won on countback over Jade Moorehead, both completing a 1.50 scaling. Leonore Church was next for Craughwell in 4th place overall with a 1.45 followed by Siofra Davis who cleared 1.30.

Ever consistent, Laura Cunningham won both the Senior Women’s Long Jump and Triple Jumps with clearances of 5.23 and 10.34 respectively.

[Side-note: On the subject of jumping the Galway mini Series concluded on Saturday and Sunday and among the many brilliant performances, it is worth mentioning an incredible 1.70 high jump from u14 Conor Penny. Most years this would win the all-Ireland at a canter and it is a really stunning achievement. The full results aren’t out yet but more to come later on that one! Conor is clearly one for the future!]

Relay Successes
We had a huge amount of relay teams join the action. Ronnies sprint group capped off their great day with over two relay teams in the 4x100m – I say over two as the first relay team finished second on the day and first M35 with the quartet of Cormac Kearney, John Walkin, Dave Mulligan and Brian Malone clocking 49:17. A second Connacht dream team of Ronnie Warde, Declan Owens, Evan Morgan and Justin Lane (Tuam AC) ran a fine 50.74.

The girls had two relay teams in the 4x100m with Arlene Earls, Alisha Larkin, Lorraine Delaney and Laura Cunningham combining mightily to run a fine 51.94. The Junior Girls team of Erin Kelly, Saoirse Pierce, Siofra Davis and Alison Corrigan combined well for the first time to close in 55.76, just pipped on the line.