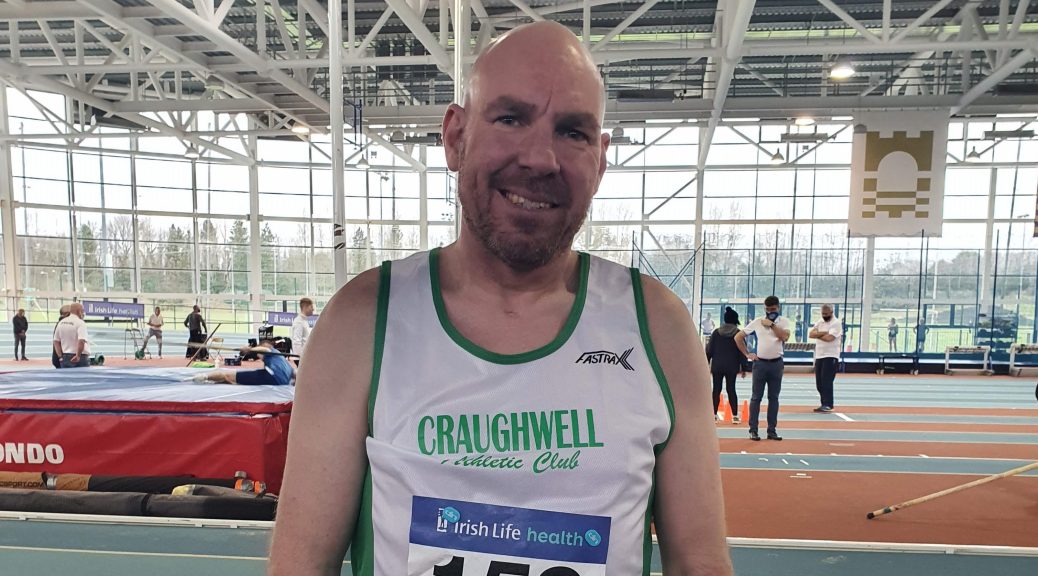 It was great to be back inside a full and post-pandemic AIT as the National League Round 2 proceeded in full force. It was a great day for Craughwell AC as club records fell across a range of disciplines and the club ended up with its highest Men’s team total ever in this competition, narrowly missing out on the finals by a single place. Well done to all athletes, officials and coaches for making it possible. Special thanks to AAI’s Liam Hennessy and Andrew Lynham who were super-helpful with some checkin glitches we had. I’ll cover the events in random order, starting with the club records!!

Jack did a huge amount of the early running while Kyle and Oisín sat well back. About 450m in, Kyle spotted a gap on the inside and made a great move at the right time to slot through take the lead with about 180m left to run. It looked like he had it sewn up, but a Tallaght AC athlete just piped him on the line. It was an excellent 1.54.32 personal best, and a NEW CLUB SENIOR RECORD, smashing Paul Joyce’s fantastic 1.56.42 by over 2 seconds! Most impressive for Kyle were his negative or relatively even splits – he went through 400m in ~57.3-5 which shows he ran the second half faster than the first – a hard thing to do in 800m running and showing that he has a lot more in him. Jack Miskella was just behind in 3rd, also under the old senior record with a 1.55.42.

Oisín Davis showed the future is bright, surviving a rocky patch in the middle to finish strong with a fine 1.57.34 NEW CLUB JUNIOR RECORD. With schedule overruns it was a long day for the leaving cert student to spend in Athlone waiting for his race, but he was delighted with his season opener at the end and really glad he came! He did a fair bit of “messing” in the race – slowing down to pass people on outside, etc. so there is probably more in him. Watch the race unfold above!

William Fitzgerald took a look at the club records before he headed up to Athlone today and took note of a time to target: 8.35.63 – the fantastic Club Record set by Collegiate Damian O’Boyle in 2020. He had good company: Hiko Tonosa of DSD/DTC was there to grind out a punishing 3:55 pace for 1500m in the hopes of hitting 7:50. William didn’t concern himself with Hiko, he had a great group to tuck in with all about the right pace.

As the laps ticked past, it was clear he was on for his target. The breathing can be difficult indoors and he really felt the pinch with 800m left to run, but he dug deep and showed his great mental strength to dig out a fantastic 8:32.10 club record. A wonderful performance, it’s a great feeling to set yourself a goal and achieve it!!

[Note: Damian’s time was set on an unbanked track which is definitely slower to run on – we don’t have flat tracks over here – a quick look online shows a bit of debate on conversion ratios milesplit online calculator converts Damian’s time to 08:29.7 whereas the NCAA conversion chart and the CIS indoor track conversions both put it at 08:33.2 (0.9953 ratio for males.. though why men and women need a different ratio beats me!). I might just leave both on the records page!]

In the women’s 3000m, Sinéad Gaffney set herself a target of 10:30 and just about achieved it with a 10:31 in a fine run which was largely done solo after the first km. Sinead found a partner and sat in nicely for the first km, passing in 3:28 before forging ahead solo for the remainder of the race. She did brilliant to hold her concentration through to the finish and clock a nice personal best/debut which will be very useful for calculating training paces going forward.

Lukas Schukat had an absolutely fantastic High Jump performance with an excellent personal best of 1.85, a superb performance! Lukas came in at 1.70 and sailed over all heights until 1.85 which he cleared on the second attempt. His clearance was good enough to win the competitions, clocking an excellent 14 points for the team.

Evan Quinn cleared 10.89 in the triple jump for another 6 team points.

Síofra Davis and Leonore Church competed as guests in the women’s high jump and showed some return to form, with Siofra clearing 1.45 and Leonore leaping 1.40.

Hot after setting a Club PV record last week, this week Justin smashed the WFD record by throwing a fine 4.72 to back an exceptional 10 team points! All of Justin’s throw were well into the 4-metres showing great consistency – he is a one man points machine.

The club 4x200m record is almost impossible to beat, but the lads gave it their best shot today. With three of the lads just finished a tough 800m, lactic was high in the legs but they had fine runs, clocking 1.39 which is a sub-25 average. A lot of potential if we can get our baton changes sorted! Dave Mulligan got the team off to a good start, followed by Kyle, then Jack and Oisín took it home. I timed all the splits and they were each just under 25s, but it’s hard to time a relay. Watch their heat below:

Ronnie’s sprint crew were focused on sharpening up for the National Masters next weekend and were out in force, mostly as guests. John Walkin ran 26.19 in the 200m with Cormac Kearney clocking 25.09 and Brian Malone 25.82, despite Cormac having a slight hamstring niggle. Ronnie Warde covered the 200m in 25:30.

Patrick Noonan rocked up to watch affairs as a spectator, but quickly got roped into running a 400m in borrowed shorts, spikes and singlet, despite having 12 hard miles in his legs. Much like “Dash” from the incredibles, Paddy was under strict instructions from his coach not to run too fast – there was no point risking any kind of injury. Fair play to him for covering the ground smoothly in 57s and picking up a nice set of 6 points for the team in the process.

Sean Cotter had a time in mind for the race today, but the large surging field made even pacing impossible. Sean took a conservative start at the back of the large field, and as each lap passed he kept advancing his position. Re-watching the race, the first two laps left him a lot to do and some of the breaks ahead of him made things tough. He finished very strongly in 6th place in a fine new indoor personal best of 4.05.27. It was a great race – Sean is in fantastic shape and will definitely have learned a lot from this race experience today. Watch the race below.

After the two rounds, the table sits as per below, with Craughwell just missing out on Finals actions – a fantastic first outing in the event for the club and we will be back!!!