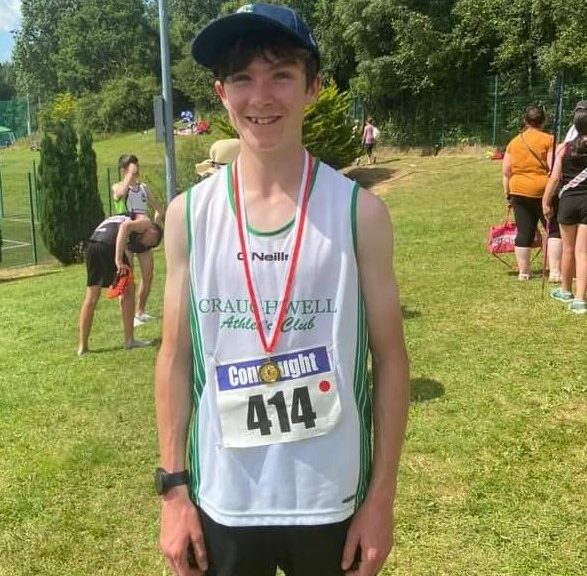 A splendid weekend of Athletics concluded in Athlone on Sunday with some incredible performances from the U12-13 Age Groups, and the 1500m for U14-U19 Age Groups. In a great weekend, Craughwell AC Athletes broke an incredible EIGHT Championship Best Performances and won dozens of medals – no club broke more, a fantastic achievement for a club representing such a small village! Many thanks to the Connacht County Board and all the officials who gave up their weekend and took a scorching to host this competition.

The report from Saturday is here. The following is the full list of Championship best performances over the weekend!

With two laps remaining, a gap developed and Declan stretched it to 14 seconds by the end. This is a truly exceptional run and if he stays healthy Declan will be very, very hard to beat in the all-Irelands!

Sean Cotter also took the u19 1500m Championship best in a battle to the line with Oisin Davis – winning in 4.09.  The current 4.16 record was held by their good friend and training partner Paddy Noonan so the plan set on the way up was to knock a bit off. It was good championship race practice. Oisin led the race for the first 1300m keeping a decent honest pace, with Sean and a GCH athlete on his heels. With 300m to go the race kicked off in earnest and the two boys pulled clear, swapping places in a great battle which lasted right to the line, Sean passing again for the slimmest possible lead with 10m to run.

Emily Miskella won the u18 girls 1500m in 5.11 in a very solid run. Emily showed good character to come back at her opponent with 150m to run and take the win.

Holly O’Boyle was 6th in her 1500m in 5:47.  Holly is new to the event and getting the hang of pacing. Her pacing was much better this time than her last outing, lasting two laps with the field in baking heat.

U12 and 13s excel lead by Alan and Rachel

The day kicked off with the younger kids and the athletes all did them selves proud – Alan Hallinan and Rachel Warde had particularly great days.

The girls also did brilliantly in the high-jump, taking places 2 through 7!  Lauren Morgan and Ava Doyle came 2nd and 3rd.

Then Rachel Warde set a massively impressive Connacht Championship record with her win in the 80m in a time of 10.23. This was a huge PB and a great result for the talented and popular athlete. Rachel then had a massive win in the 60m hurdles with an excellent 10.31 victory.

The u12 boys relay team came 3rd in 59.93.  Max Madden and Killian Burke came 6th and 7th in the Shot Put while in the Turbo Javelin Killian Burke was 5th, Oisin Molloy 7th, Charlie Daniels 12th.

In the u12 girls Kateyln O’Connor was 3rd in the Shot Put while Maya Gorecka continued her progress with a 2.46 clearance.