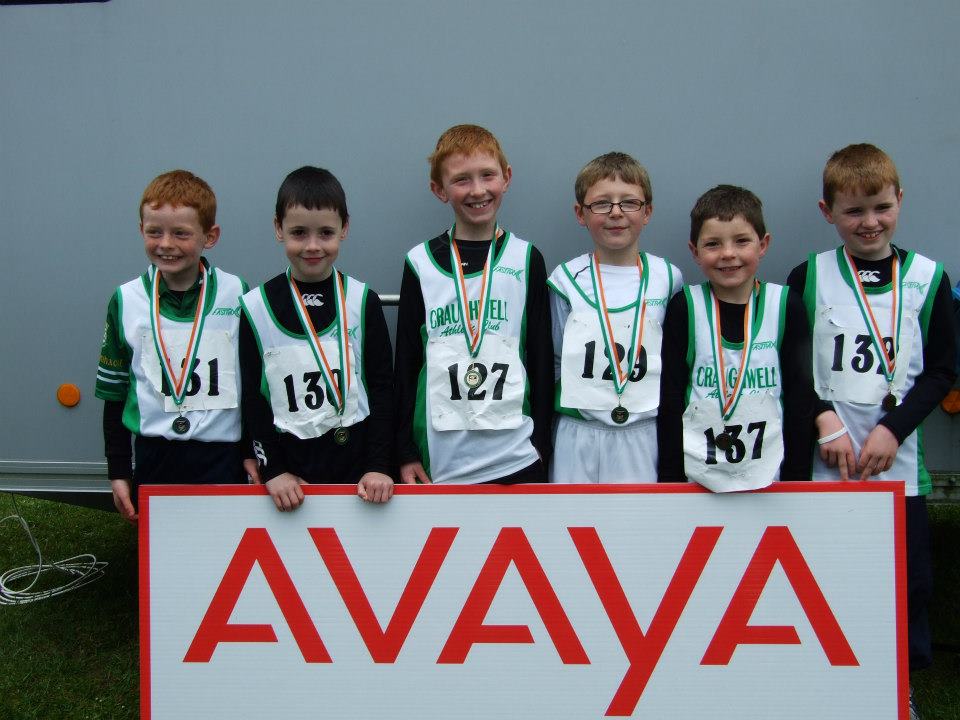 A big thank you to everyone who helped out on the day and to the sponsors Avaya. It was good to see so many clubs there, in particular Corrib AC who I think were participating in this event for the first time.

Check out Galway Athletics facebook site for some photos of the day.

And a big well done to the Craughwell athletes who had a marvellous day. There were many many highlights for the club, read on for a full report.

Craughwell AC’s youngest athletes travelled in droves into Dangan in Galway City today for the Avaya Galway Track & Field Championships. The unseasonal weather (is there such a thing anymore?) did its best to dampen the spirits of the athletes and spectators with misty rain for much of the day. But just in case you were feeling sorry for yourself, I’d have much preferred the misty rain to being stuck in the shed typing up results for 5 hours

With 100 athletes from the club in action, Craughwell had by far the largest numbers participating and matched that with an even larger haul of medals taking home 13 Galway titles, 13 silver medals and 10 bronze medals from the 30 events on the programme. And it wasn’t just the numbers that were impressive; it was the quality of the performances with some amazing performances at this early stage of the season coupled with a miserable day. These performances are a credit to the efforts and dedication of the athletes and their coaches – long may it continue.

The club acquitted itself well in the 60m sprints with several pairs qualifying for the Connacht finals led by an impressive 9.48 from Aoife Kelly in the U11 girls. Unluckiest sprinters of the day were Gavin Kelly and Shaun Gilligan who were 2 hundredths and 5 hundredths of a second from Pádraig Martyn’s time but yet placed 5th overall in the sprint when Pádraig placed 3rd.

The middle distance races saw an exceptional performance from Rebekah Flynn and Emily Miskella to take the Galway title by 0.3 of a second from GCH when recording a combined time of 3:22.2 in the U10 Girls 500m.There were a few narrow misses also for silverware with no less that 4 teams placing 4th. Lewis Ryan was another who was a little unlucky when winning his 600m heat comfortably in 2.08.81 but finishing 4th overall in the U11 600m. Lewis can smile though if he compares it with his time in last year’s U10 500m which he completed in 2.03.2 – so he is running 100m further this year in 5 seconds!

The field events saw the club dominate. With 12 Galway titles on offer between the turbo javelin and the long jump, Craughwell athletes took home 10 of them along with 5 silvers and 5 bronze – a remarkable performance and more than 50% of the medals from these events.

The Trehy brothers Conor and Michael led the way in turbo javelin U10 and U11 events to take the Galway titles with their partners Oisin Keane and Liam Diviney. There must be no stones left in the Trehy driveway such is the boys’ prowess in the throws! Results of the javelin were as follows.

As is customary now, the club dominated the long jump with some particularly impressive performances. These included Evan Hallinan’s and Fiachra Bond’s combined 6.20m leap to win the U9 boys, with Evan’s leap possibly a new club record in this age group – I need to check my stats on it. In fact, the U9 boys whitewashed the opposition with a 1-2-3 in the event.

Not to be outdone, the U9 girls were equally impressive with the ‘Jades’ claiming victory ahead of Athenry and GCH.

The U10s were also very impressive with some fine performances, none more so than Rebekah Flynn and Emily Miskella who added to their 500m gold with victory in the long jump – a performance which would normally be good enough to medal at National level.

The U10 boys also jumped with style which saw them notch up gold and silver.

Aíne Kelly and Ava Finn were just pipped for gold in the U11 girls’ event by the narrow margin of 3cm and had to settle for silver. They can be happy with their jumps however as a similar performance in last years’ National U11s would have netted them bronze medals and I’m sure this makes them hungry for more.

Pádraig Martyn and Conall Doyle claimed the final title of the day when winning the U11 title with a combined leap of 7.20 – again a performance which will threaten for National medals. Hard luck to Fionn McArdle in the same event who suffered 3 breaks – very unfortunate for last years’ National silver medallist.

That wrapped up a fantastic performance for the club with the top 3 in each event going forwards to the Connacht finals on Saturday 8th June.