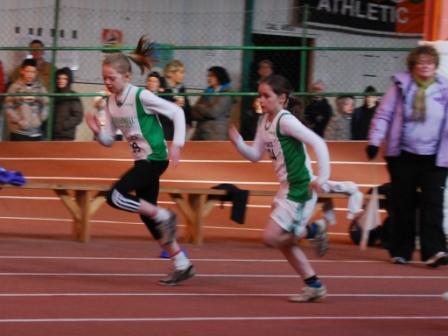 A busy week wrapped up on Sunday with the first day of the Connacht Indoor Track & Field in Nenagh with many outstanding performances across all of the age groups. The little village of Craughwell more than held its own on the day, with more than 100 athletes from the club participating and the club featuring near the top of the medal table with the big town/city clubs of Galway City Harriers and Westport.

Highlights of the day included a breathtaking race in the U15 boys 800m which saw Nicholas Sheehan and Conor Gillen battle it out for 1st and 2nd place in exceptional times of 2:19.44 and 2:20.82 minutes. The pair were drawn in the same heat and a ferocious battle ensued as the 2 boys zipped around the tight curves of Nenagh's indoor track. Neck and neck for the whole race, with 150m Nicholas made a decisive move to take over at the front and sprint for the line, opening a small gap on Conor and holding it to the line. Such was the pace of their heat, they took gold and silver when the results were announced. In the other heat, Keelan Ryan and Matthew Moran also recorded superb times when running 2:36 and 2:39 for the 800m and taking 3rd and 4th places in their heat. The battle between the two was just as intense with the lead been exchanged between them on several occasions. Matthew looked to have Keelan dead and buried as the race entered the final 200m but Keelan discovered his hidden sprinting talents to pull a huge finish out of the hat on the last lap to finish 3 seconds ahead of Matthew.

Sprinting talents also flourished in the 200m races where David Farrell and Tomas Keehan both put in top-class 200m performances in the U17 and U18 200m where both athletes recorded times in the low 25s – with David 5th in his race with 25.64 and Tomas 2nd with 25.11. Highlight of the sprints however was the U14 boys 60m – where Nenagh buzzed to the victory celebrations as not one, not two but three Craughwell sprinters took medals in the same sprint final – with Aidan Conneely the victor in 8.19s and Conor Duggan and Kelvin Olayemi sharing the bronze spot with 8.47s. This is first for the club at this level and says volumes for the sprint coaching by Martin Conneely and Triona Coppinger in that age group. Must be the new starting blocks that we got recently!

There were so many highlights, its hard to know where to stop – but I must also mention the race 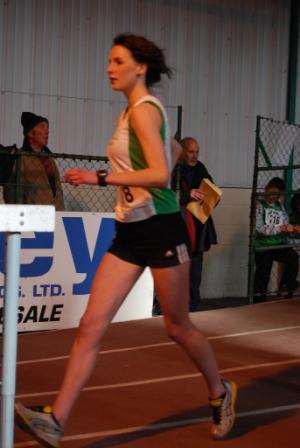 walking performances from Emma Byrne, Christopher O'Connor, Shane Finn and Maeve Curley. Many would expect to see a strong tradition of race walking in Craughwell given Ann Loughnane's exploits on the world stage – but it never really took off in the club until now. We were lucky to inherit another top-class race walker when Maeve Curley emigrated from remote plains of Westport a few years ago to the rich (and wet!) pasturelands of Ardrahan. But now, the sport of race walking is catching on in the club due to the efforts of Alison Finn – with several athletes training on a regular basis on the track around the astroturf. These efforts paid off on Sunday when Emma Byrne raced to a fine victory in the U14 girls 1000m, followed by Shane Finn taking bronze in the U14 boys 1000m and Christopher O'Connor taking bronze in the U15 boys event. And needless to say, Maeve Curley raced to victory in the U19 girls 1500m walk – setting a blistering pace but well outside her PB until she discovered from race officials that she had raced an extra lap!

The club had its customary strong performances in the long jump with many medals coming our way. David Farrell added yet again to his PB when taking bronze in the U17 event with a leap of 5.37m. Claire Ryder claimed gold in the U15 girls long jump – possibly 4 Connacht indoor titles in a row for Claire? Ella Bryan returned to form in the same event, breaking the 4m mark for the first time to take the silver medal with 4.06 and bring back fond memories of when Ella and Claire shared the top 2 spots on the Connacht podium as U9s! Ashley McDonnell took double gold in the U18 long jump and triple jump. Niall Rooney and Tomas Keehan claimed silver and bronze in the U18 triple jump. And the long-jump specialist Gaffney family took double honours when Emma came 2nd in the U12 long jump and Sinead came 2nd in the U16 event. Rumour has it that parents Pat and Maria are going to contest the Galway outdoor long jump in the summer. Ashling Keady Cummins made it an U12 double in the long jump when taking 3rd place with 3.34m. The long jump success was wrapped up by Aidan Conneely with bronze in the U14 boys event with 4.32m. Diarmuid Prendergast had a good debut in the long jump with a 4.19m jump, with Oisin McNally going an inch better with 4.22m to take 5th and 6th place and Cathal Reidy breaking 4m for the first time with a 4.02 to take 7th place.

When you look down through the detailed results, its only then that you get the depth of talent that the club has in the long jump

The club also did very well in the shot putt with five medals – the U13s led the way where Cathal O'Brien took an excellent gold in the boys event and Andrea Tobin took bronze in the girls event. Ronan Nevin claimed the bronze in the U12 boys event while Siobhan Connolly took silver in the U14 girls event. Shaun O'Brien competed for the club for the first time and took gold with a fine throw in the U17 boys event – with huge potential to do well in this event in the All-Irelands.

In the sprints, beside the aforementioned Olympic U14 sprinters, there was also a fine performance from Claire Ryder to take the silver medal in the U15 girls 60m and from Sinead Treacy to take bronze in the U14 girls event. Cillian Reidy ran a very good time in the U17 boys 200m with 26.45, as did Liam Dundon in the 60m. Unfortunately Gearoid Mannion took a tumble in the U17 boys 200m which put him out of the race, but thankfully he didn't sustain a serious injury. 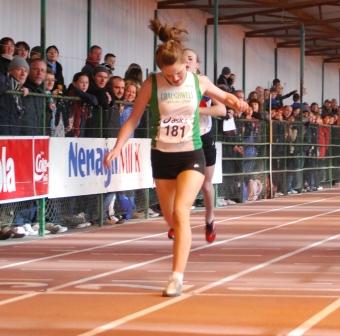 Last but by no means least, the club had some fantastic performances in middle-distance. Aoife Greene who transferred from Ballinasloe at the start of the year led the way with a superb victory in the U12 girls 600m. And James Cahalane took a fine bronze medal in the U12 boys 600m. I've already mentioned the breathtaking performances of the U15 boys. In the U15 girls 800m, Derbhla Maloney and Gabrielle Tobin ran well in their heats but finished outside the medal positions. The U16 girls were very prominent in the middle distance races, with Sinead Gaffney taking the bronze in the 800m (almost pipped on the line by Laura Porter who was coming down the track like the new Craughwell express train) and Laura taking silver in the 1500m followed closely by Muireann Maloney in bronze position. Linda Porter completed a fine middle distance double – pipping GCH's Michelle Maher on the line in both the 800m and 1500m. Katie O'Donoghue had to step up an age into the U18 800m race because of an unfortunate mix-up in the assembly area – but it didn't daunt Katie in any way and she raced to a super indoor PB of 2:37 to take 2nd place in the U18 race with a dazzling last 200m. Finn Stoneman, Paul Joyce, Paul Fitzpatrick and Padraic Tobin all ran well in the U16 and U17 boys 1500m – I don't have times yet for their races but I've a strong suspicion that they ran a lap too much which would render any times meaningless in any case. In the U18 1500m, Shannen Freaney continued to improve her running form and took a fine bronze medal; while Peadar Harvey took double silver in 'hard-fought' 800m and 1500m races. By all accounts after Peadar's race, the club needs to invest in some boxing gloves to help our 1500m runners cope with the tight bends in Nenagh! Strong suspicions too that Peadar's 1500m had an extra lap – we'll need a few extra calculators at the bell in the future! Maeve Curley had an outstanding 1500m performance in her race, sitting in 3rd place with 180m to go and finding an extra reserve tank of energy to launch a massive attack on the last lap and close a gap of 30m to take 2nd place.

So a great day's action for the club and still the hurdles and high jump and relay to look forward to next month. I hope I haven't left any medal winners out of the above account. I know I've left many other fine performances out but I will have to wait for the full results to be published in order to add them.

Full results of day 1 are at www.craughwellac.com/images/stories/2010/indoors/connaughtindoorresults2010.pdf

Well done to Tracy Harney who was competition secretary for the event and who put in trojan work before the day, on the day and after the day in taking entries and compiling results.