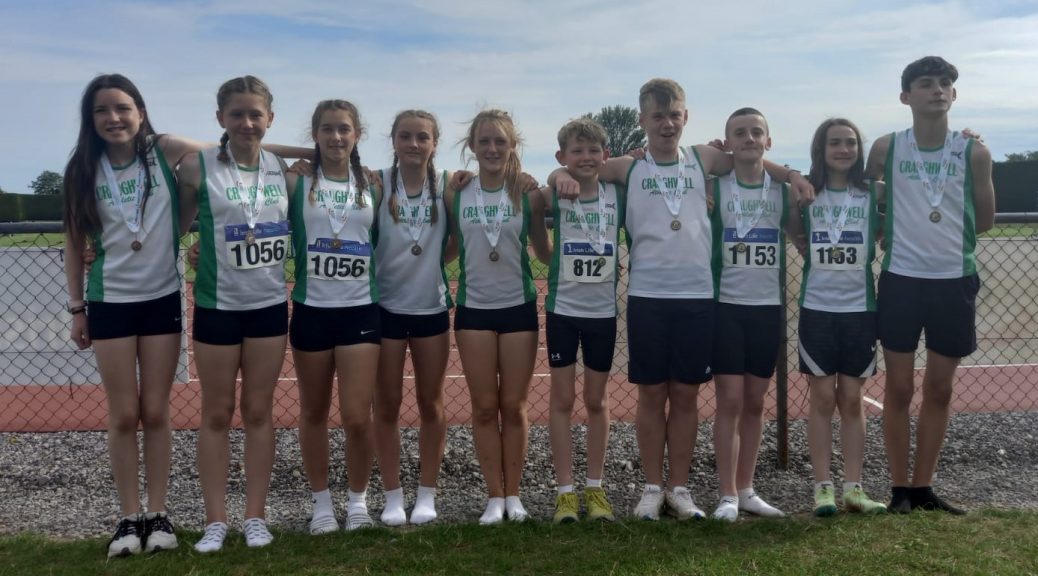 Temperatures soared in Tullamore as Craughwell AC headed in droves to the third and final weekend of the all-Ireland.

The relays took place on Saturday and we had our best ever day in the event thanks to the exploits of coaches Ronnie Warde, Brendan Penney, Evan Morgan and their great “Rockets” group of athletes who entered no less than four teams on the day.  You can really see the effects of the great coaching in the videos below – the well-drilled Craughwell team visibly were boosted on each slick baton change.

The group got off to the best possible start as the under 15 Boys won a famous national Gold in the 4x100m.  Conor Penney set them in motion with a marvellous first leg out of the blocks, eating up the stagger on his opponent and handing over to Dean McNally who ran an exceptional leg to hand over smoothly to Joshua Whyte.

At this point the stagger started to unwind and it was clear that Craughwell were in the lead – Joshua handed over to Donnacha Lawless with a clear lead which Donnacha extended all the way to the line. A fantastic victory for a great group of athletes – Toyosi George was reserve on the day and would have done a great job for them if needed.  The team finished in 48.93, a full second clear of second placed team Galway City Harriers in 49.95 in a great show for Galway.

Incredibly, the under 14 boys repeated the heroics just a short while later.  Ethan Stace got them out to a strong start, passing the baton over to Kai Watters who had one of the runs of the day, passing two athletes and handing over the Dara Simpson who hauled level with the lead by the time he handed over to Tom Malone.  The well-drilled changeover was so smooth that it gained Tom a metre on his opponent and he didn’t give an inch over the final 100m to claim a fantastic victory.  The team was rounded out by substitute Alan Warde who was critical to the qualification in the Connachts. The finishing time of 51.08 was just .2s clear of the second placed team.

The under 14 girls team performed exceptionally with Katie Leen getting them off to a stormer and handing off to Lauren Morgan who made up huge ground before handing over to Beth Glynn on the crucial third leg.  Beth handed over the Rachel Warde in 4th and Rachel Warde who absolutely blitzed the anchor leg to claim a fantastic Bronze medal.  Claudia Coyle was the vital reserve on the day.

The under 15 girls team of Keevagh Barry, Emma O’Donovan, Chloe O’Reilly and Lauren Kilduff qualified strongly for the final and all ran exceptionally but they were just out of the medals on this occasion, finishing 5th in a tight battle to the line in 51.96 to the winners 51.10.

The All-Ireland B Championships also took place on Saturday and there were three entrants from Craughwell.  These championships give a welcome competitive experience to those finishing outside the medals in the national Juveniles and have long been a springboard for success in the future. For example, Ireland’s most recent European u18 medallist Fintan Dewhirst was a medallist at the most recent All-Irleand B Championships.

Pride of place went to Max Madden who won Gold in the u13 Shot with a fine personal best of 10.08m.  Donal Coyle had a fine run in the 600m to finish 5th overall.  Alan Warde was very unlucky not to medal in the Long Jump with a fine 4th place finish and he was also 5th in the 80m sprints.