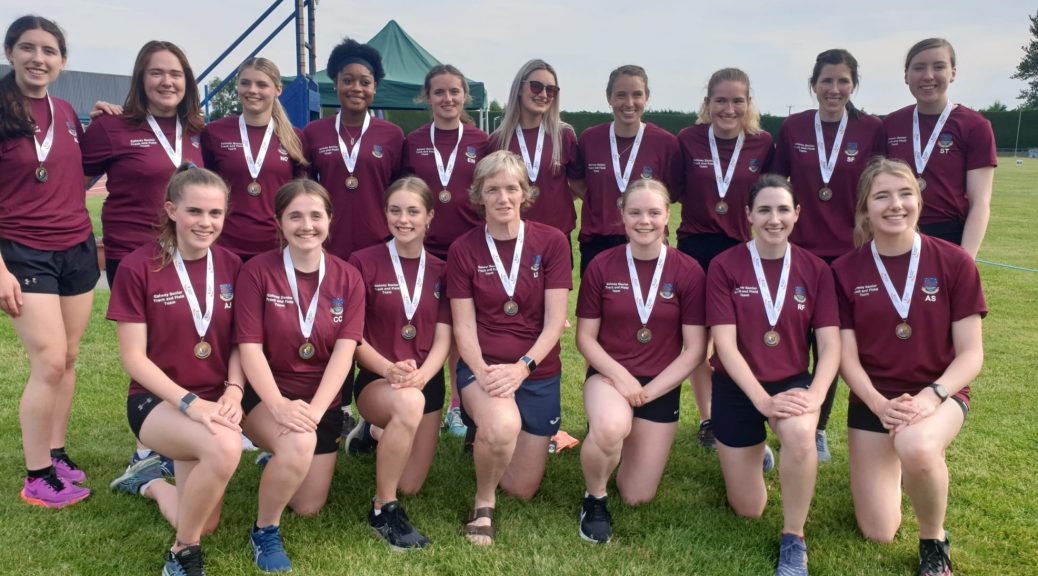 On Sunday the finals of the National league took place in Tullamore and Galway had two teams featuring several Craughwell Athletes.  The National League is a team event where teams compete across the full range of disciplines with points awarded based on position.

The Galway ladies were in the Premier Division and the team was managed once again by Sarah Finnegan of Craughwell AC.  Incredibly, this is Sarah’s 13th year as team manager – a difficult job akin to herding cats at times – Sarah has done fantastic work and her tireless effort is a superb contribution to Galway athletics.  She masterminded a super team again this year and they blasted into brilliant Bronze team medals ahead of stiff competition with some heavy contributions from Craughwell AC Athletes,

The ever brilliant Sinead Treacy was a huge points winner for Galway.  Sinead ran an incredible leg of the 100m on the back straight to help power her 4.100m team to first.  Sinead later ran the 400m individual where she broke 56 seconds for only the second time in her life with a fine 55.95s.  Sinead finally ran on the 4x400m team which also featured Rachel Finnegan to come 3rd.  Jade Moorhead showed nerves of steel to win the High Jump in a fantastic 1.60m on her final jump.

Sinead Gaffney ran a brilliant 800m race, just getting pipped for the win at the death in a fine 2:19.2s after a tactical first lap.

Adara Salvo answered the call for the senior women’s team and despite having to run much of the race solo, ran a huge personal best in the 3000m to record 11:08.3 in the blazing heat and winning more valuable points for the Galway team.

For the men competing in division 1, strong-man Justin Lane was 3rd in the Weight for Distance.  Justin also claimed points in the Pole Vault, clearing 2.2m.

On Saturday, Claudia Coyle was the club’s sole representative in the Community Games final in Carlow. Claudia competed in the 800m and came 5th in a fantastic new personal best of 2.26.  This caps off an excellent season for Claudia.