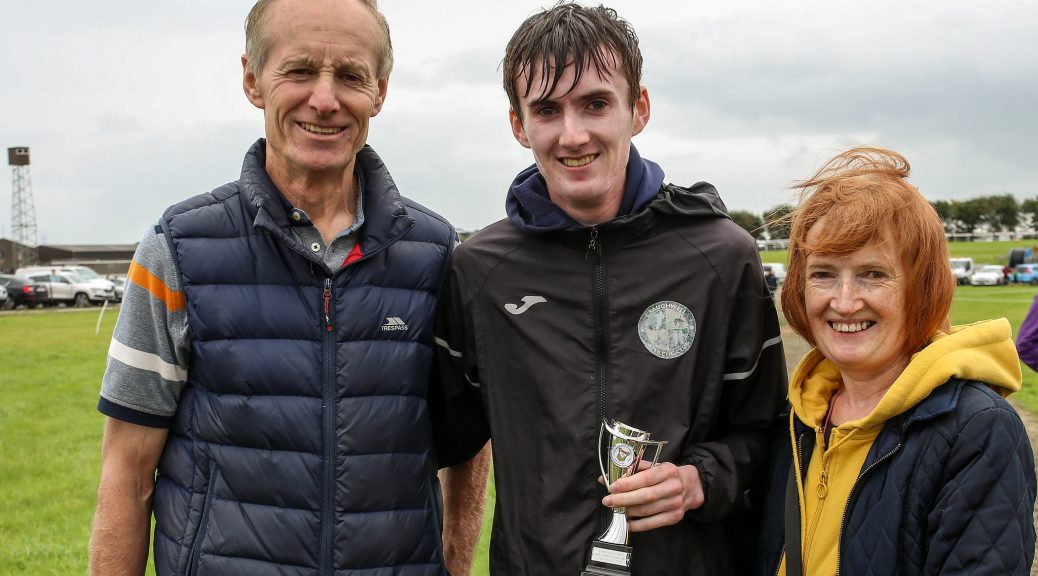 Host Club Castlegar once again delivered a fantastic day of Cross Country action. They changed venue to a fabulous course in Ballybritt Racecourse and a classic was delivered. The course was ideal – a tad soft in places but not a whiff of mud and full of challenging hills and twists. I certainly didn’t miss the playground from their old course! Well done to Stephen, John, Phillip and all at Castlegar for delivering a fine days racing.

The field was exceptional – including National Cross country Champion Liam Brady and 13:58 man Dean Casey among others. We knew he was in good form heading into it, but William Fitzgerald turned heads with a fine run in the Senior men’s race for 3rd, just ahead of club-mate Jamie Fallon in 4th. The leading group of 4 – two Ennis and two Craughwell lads broke clear after 1 lap and with a lap to go the class Casey put the hammer down and managed to seal the win. Oisin Davis had a fine run in 8th (1st Junior) as did Kyle Moorhead in 17th (2nd Junior), Mark Davis (23rd) and Anthony Boyle (43) rounded out our team.

Special mention has to go to u14 Declan O’Connell who had a Communion later in the day so hopped into the Senior men’s race for about 2-3k and hared past Oisin and the classy Keith Fallon who were battling at the front end of the field. Oisin was massively impressed with his run!

In the Seniors women’s race our ladies won Silver in the Galway Novices with a crack team of Emily Miskella, Anna Cotter, Aoibhe Carr and Grainne Tuohy. Grainne had the run of the day as she missed the start and had to sprint to catch up with the field and she finished with an excellent 29th place finish in the high quality field which included Olympian Breege Connelly. It was BRILLIANT to see a team together – it can be really hard for teams to assemble in this age group so class that we have one now and hopefully we can stick together for the season!

The Open 2k race was won comfortably by newest member Brian O’Culain in a fine 7:34.

In the u16 races, Holly O’Boyle had a stormer to win first place, almost breaking her 3km track time over the cross country. Holly normally leaves a lot in the tank but she really gave it her all this time and it was great to see!

In the u16 boys race, there was a great battle between Steven “the Hitman” Ruane and Killian Walsh – in the end both had fine runs, with Steven driving home for a great finish and first u15 and Killian close behind.

There were many Brilliant performances from the younger age groups – results and some photos below.

Though everyone was fantastic, we had individual standout performances from Aeveen Kelly 3rd U13, Stephen Joyce 2nd U13, Sophie Meehan 4th U11, Donal Coyle 6th U11, Jack Hibbit 2nd U9 (in a razor thin finish) and Muireann Kelly 3rd U9.

As well as the individual races – Craughwell fielded many fine teams in the relays. We also gave one of our finest u15 runners over to a South Galway team that needed athletes an finished 3rd. There were stewards enquiries into the kid’s age, nothing was proven so the result stands!!

The higher quality pictures in the above article came from the maestro John O’Connor – check out his flickr Gallery for the full set: