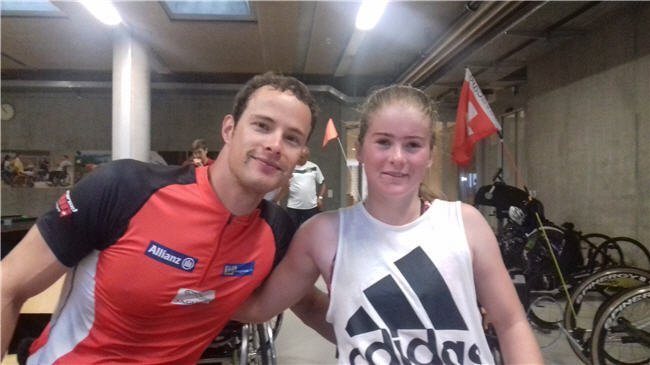 The incredible achievements by athletes from the club just keep on flowing! The latest breaking news is one of the biggest achievements ever by an athlete from the club – an invitation to take part in the Diamond League in Zurich!!!!!!

Shauna Bocquet and her dad and coach Loic are just back from a one week training camp in Switzerland. Shauna spent the week training alongside athletes from around Europe (Swiss, Netherland, Germany, Scotland, England, Austria, Ireland and Denmark) under the watchful eye of World Champion Marcel Hug one of the top wheelchair racers in the world and his coach, Paul Odermatt.

Marcel also joined the sessions along with some of the Elite Swiss Paralympic team, who are getting ready for Rio 2016. It was a very busy week with two daily training sessions and evening workshops but a lot of fun also with an excursion in Zurich including a visit to the FIFA football museum.

Thanks to her performances during the week, Shauna has now been invited to compete in an U23 girls 400m wheelchair race as part of the Zurich Diamond League meeting on Thursday the 1st of September in the Letzigrund Stadium. This is an incredible achievement for any athlete but for a 12-year old girl – incredible doesn’t do it justice!

Shauna has a busy August to prepare for the Diamond League with training sessions with the Irish squad in Waterford and Belfast and races in Coventry and Belfast before heading off the Zurich.

Well done Shauna, the club are proud of you!