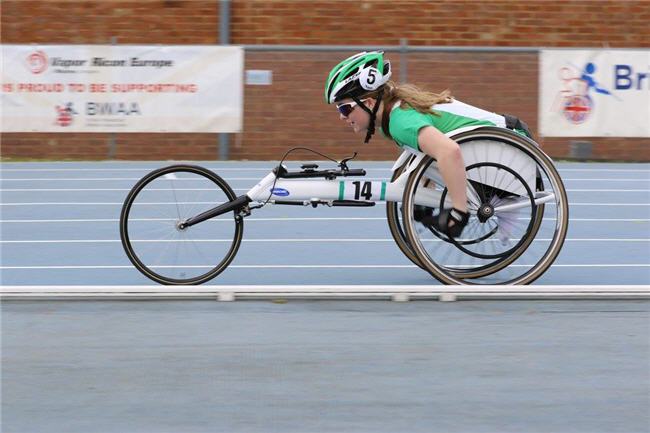 Shauna Bocquet competed in her first British Wheelchair racing games in Stoke Mandeville on Saturday and Sunday. Over 70 wheelchair racers (including 28 girls) competed, with the best of Great Britain looking for qualification times for the upcoming IPC European Championships. The conditions were great with temperatures reaching 25 degrees over the two days. On Saturday, Shauna started with a 100m PB in the heats with a time of 19″27, more than enough to make the A final in the afternoon where she came 6th amongst European, World and Paralympic champions! Next was the 400m where she managed another PB with a time of 69″33 but, this time, it was not enough to make the final as she was 10th time overall. Finally, she raced in the 1500m final coming 4th and recording a 9 seconds PB with a new time of 4:34″08.

On Sunday, the wind had picked up but Shauna recorded one more PB in the 200m heats with a time of 35″67 and once again made the A final where she came 7th. To complete the week-end, Shauna also made the 800m final where she could hold on to the pack for the first 300m and managed to hold off a late charge from the older and stronger girls to come 6th in a brillant finish! Great week-end overall and a lot of experience gained. Next on the track will be the Irish Nationals in Santry on the 4th of June.