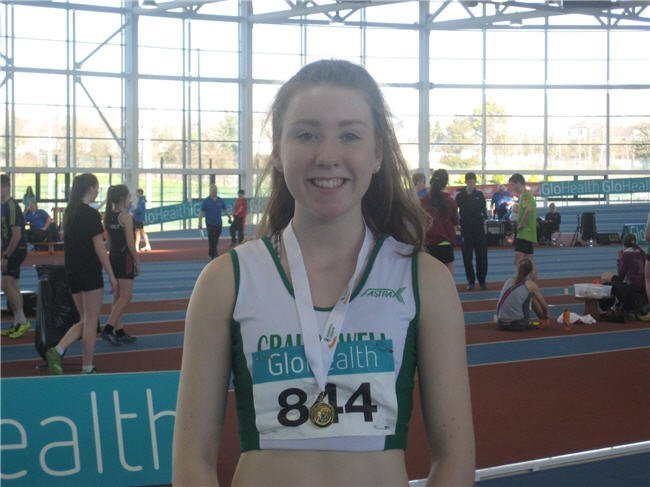 Sinead Treacy was the star of the show on day 2 of the National Juvenile Indoor Track & Field Championships in AIT today when taking the U19 60m title in a blistering 7.84s – one of Sineád’s finest indoor performances in her final year as a juvenile athlete. Sineád’s progress over the years is an inspirational example to all of our younger athletes. If we rewind the clock to when our current U12s were U5s and in junior infants or thinking about the big step up into junior infants, Sineád was an U12 competing in the Galway Indoors in Nenagh where she placed 3rd, a feat she repeated in the Connacht’s in a time of 9.46 before going on to place 13th in the National finals. Her hard work and dedication in the intervening 7 years has paid rich dividends for Sineád and long may it continue for her after she leaves the juvenile ranks.

It was a super day also for Conor Duggan as he sped to the bronze medal in the U19 boys 60 in a fantastic time of 7.02s, having earlier raced to a time of 7.01 in the heat. Aidan Conneely also had a good time of 7.47 on his comeback from injury to place 4th in his U19 60m heat. And it was unlucky 4th place for Damien O’Boyle and Matthew McKernan in the U19 1500m and U18 long jump. In a congested start to the U19 1500m, Damien got jostled to the back of the field in the initial few metres and it seemed to upset his rhythm in the early stages. As the race accelerated after 600m, a leading group of 4 broke away and Damien had to move up from the back to chase the group who had opened a 10m advantage. Reeling in 1 of the group on the 2nd last lap, it was too big an ask on this occasion and Damien had to settle for 4th place in a time of 4.07.04. Matthew McKernan had a strong series of jumps in the U18 long jump holding 3rd place until the last jumps of the event with a best of 5.67m but unlucky to break 2 of his jumps, one of which was over the 6m. In the end, 3 other jumpers went over the 6m to relegate Matthew to 4th place. 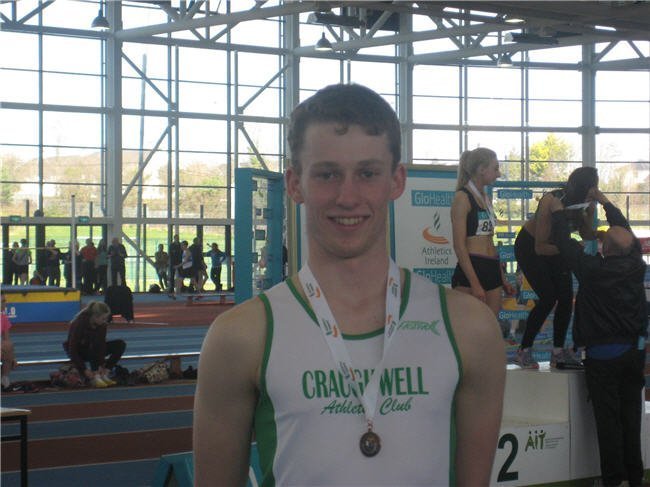 In the high jump, Lukas Schukat had a brilliant series of jumps in the boys U12 grade, clearing all heights cleanly up to and including 1.30m. His first time clearance of 1.30m was invaluable as with 2 jumpers clearing 1.35m and 4 others clearing 1.30m, 3 of those on 1.30 had some knocked bars at that height and Lukas was awarded the bronze on countback – a marvellous achievement.

Ava Finn jumped well in the U13 girls high jump, clearing 1.25m but then struggling with 1.30m and exited at that height, placing 9th overall. In the U14 girls, Eva Kelly equalled her PB with a good 1.30m jump to place 13th while Leanágh Gilligan had a super series of jumping soaring high above all heights up to and including 1.40m, at least 15cm clear of that height but struggled to attempt the next height of 1.45m – with her 1.40m helping her to 5th place overall. There will be other days for this super athlete once she becomes familiar with the higher heights. Lewis Ryan exited the U13 high jump at 1.20m, struggling with the opening height and a pity that it couldn’t open lower as with a few jumps in, Lewis would clear that height handy enough.

In the U16 girls long jump, Laura Cunningham had a strong series of jumps to make it into the 8 finalists for the first time indoors, with her best effort of 4.68m coming on her 5th jump to earn her a new indoor PB and 8th place. Caoilin Milton also jumped well in the same event, taking 10th place with a best effort of 4.34m. Laura also made the last 8 of the U16 shot putt, throwing the 3kg shot to a best of 7.72m to take 8th place with Shauna Tobin throwing 5.89m to take 12th. In the U12 long jump, Lukas Schukat was unlucky to break 3 times but more than made up for it with his aforementioned brilliant bronze in the high jump. Sean Fox made the last 8 of the U12 long jump but also struggled a little with his mark breaking 4 times and recording 2 good jumps of 4.01 and 4.02 which gave him 6th place overall.

Full results of the day are at:- http://www.athleticsirelandenterprises.com/results_22032015/schedule.html