A pep talk before we braved the elements and then out into the wilds of Sligo. As we surveyed the course, the weather seemed to get 100 times worse. There was muck everywhere.

The picture across is not the actual course – its just to give readers a picture in their heads of what it might have looked like if you were able to raise your head and look around!

As we started our warm-up, the thoughts of keeping reasonably dry before race start sank quickly into the Sligo mud along with spikes, socks and feet. Tie up your shoes tighter, I urged the athletes. And if a shoe comes off during the race, leave it there!

For any parent relatively new to the sport or thinking of getting their kids involved, don't worry – this is as bad as it gets. I've never seen a day like it for cross country. Unfortunately for the local organisers, it seems to have been non-stop rain for 24 hours which left what might normally be a dry field a mudbath for the race. But rest assured, the kids had a ball of a time before and after the race but maybe not so much during it! 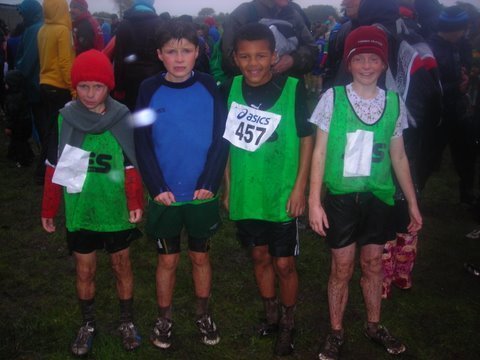 Top performances of the day had to be from Oranmore Boys NS who took the huge accolade of winning the Connacht titles in both boys races – the 3rd/4th class 800m and the 5th/6th class 1000m. Congratulations to the husband-wife coaching partnership of Martin and Denise Conneely whose hard work training in the school is paying dividends. In the boys 800m, Ici Richards put in a huge race fo finish in individual 2nd place and lead the Oranmore team to gold with an incredible score of 65 points. In the boys 1000m, Oisin Doyle took 14th place to lead the Oranmore team to gold with 81 points – an exceptional result.

Also in the medals, Ballymana NS took the bronze medals in the 3rd/4th class girls 800m with 148 points, led home by Ciana Reidy. This was a super result for Ballymana and possibly their first time winning team medals at this level. Derbhaile Walsh representing Labane NS scored the club's other individual top-3 medal in this race, taking 3rd place with a really super run. Brian Loughnane from Kilnadeemna NS was also in the individual medals, receiving bronze for his 14th place finish in the boys 800m.

Craughwell NS finished in unlucky 4th place in the 5th/6th class girls 1000m, led home by Leanne Freaney; while their boys teams put in super runs in both races but finished outside the medals. Adam Smalle was harshly dealt with in the 4th class boys race. While in the leading group after about 300m, a punch was thrown into Adam's ribs which winded him and knocked him down – leaving him breathless and unable to continue. That dealt a fatal blow to the boys chances of a team medal in that race and it was not nice to think that another runner would do such a thing. Hard luck too to Jack Doran who got spiked in the same race and wasn't able to continue.