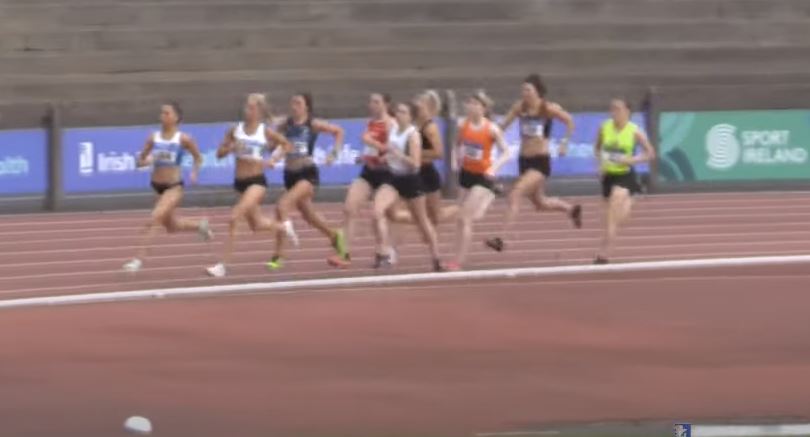 Across the country thousands of spectators tuned into their TV Screens and Phones as Weekend 2 of one of the weirdest but best national championships in recent years unfolded.  Once again, spectators and coaches were not permitted to enter the stadium so we either stood outside the gate watching our phones and catching the occasional glimpse of our athletes flitting past, or we sat at home.  Athletics Ireland are to be applauded on their running of the event – both in how they handled the schedule changes and how they kept it all running with a maximum of safety.

Unfortunately for any looking for fast times, both weekends were quite windy.  This week the wind was just a shade less strong than last but in the opposite direction to last week – hitting the runners on the back stretch from 50m-250m and time-critically from 450-650m, leaving very little in the tank for the last 100.  Craughwell AC had 4 athletes in the 800m and all performed very well.

First up was club 800m recorder holder Sinead Gaffney fresh from setting a fine club record for 1500m last weekend.  Sinead has been in great shape this year, comfortably running a near pb of 2:20 twice in the run up to the championships and she was rightly optimistic of claiming another personal best. A female 2:20 is roughly the equivalent of a male 2:00 time. She started brightly and settled towards the middle of the pack for the first lap, splitting 66 at half way and feeling strong.  She fought the wind well on the back stretch to stay on pace at 600m, however at that stage the pack had stretched out and she started to tie up – finishing with yet another 2:20.3!  A very fine run, if not quite what she was hoping for!

Next for Craughwell was Ben Garrard.  Ben had a few setbacks this year with injury leading to some layoffs at various stages of the spring/summer.  He has been back training in the last couple of week and though he wasn’t fully prepared for the 800m he decided to give it a go as it was the last race of the year.  He had no idea what to expect as he hasn’t raced in ages, but it didn’t show.  Ben ran good splits of 59 and 62 to finish with a solid 2:01.74.

Third man for Craughwell was Luke Evans.  Luke also has not had the season he would like wioth respect to injury, but decided to compete anyhow as it was the last track race of the season.  Luke is a fast starter but settled it a little this time, running a 60 first lap.  He still has not enough endurance work done to sustain his pace so he finished with a 65 to end in 2.05.  He felt strong throughout and is heading in the right direction!  When it “comes together” for Luke he will run some serious times! 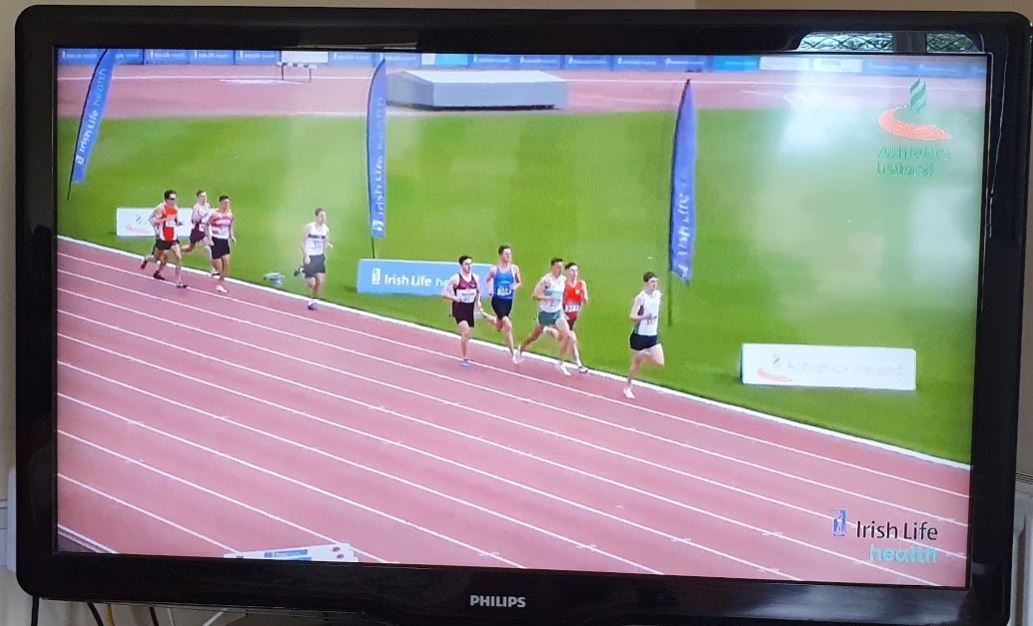 Miskey takes the field through 400m

Last competitor for Craughwell was Jack Miskella.  Jack found himself in a slow last 1500m heat last week which spoilt his chances for qualifying for the finals, and wasn’t about to let it happen a second week in a row.  After a fast start he immediately merged into lane 1 and drove the field forward from the front with a fast 57s first lap.  However Jack is not a small man and is built to catch the wind so on the back straight the effort of doing all the work started to take its toll .  Despite his best efforts, he was swallowed up with 250m to go and finished with a 62s last lap to end up on 1.59.  A brave strategy and a valliant effort which might have paid dividends on a calmer day.

Well done all!  The last major track event of the strangest year ever is the National Junior Championships which takes place next Saturday.  Craughwell AC have a record 10 Athletes taking part in the Junior Middle Distance, just amazing  for a small village and reflects the buzz in the club at the moment.  I’ll put up some article in the coming days as a preview.  If you are from the area and interested in learning how to run safely whilst having a bit of craic – drop down!  We are always looking to welcome new faces, regardless of how good you think you are – we will make you better than you ever thought possible!!