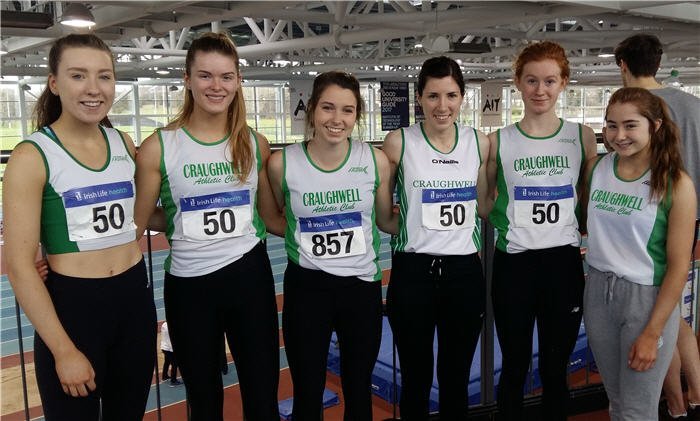 Craughwell AC’s womens team put in a fine performance in round 2 of the National League which was held in Athlone IT today. Sinéad Treacy was first from the club into action with an impressive 25.87 to take 3rd place in the 200m, a position shared by Laura Cunningham with a 1.50m leap in the high jump unlucky not to get the 1.55m on this occasion.

Today’s performances place the club’s team in 2nd place after two rounds and thus have qualified for the finals which take place next Saturday in the National Indoor Arena in Dublin.

Meanwhile in the guest 800m races, both Sinéad Gaffney and Gavin Cooney ran impressive times with Sinéad coming within less than a second of her own club record with a brilliant 2.20.87 – great form with 4 weeks of the indoor season still to come, 4 weeks that will surely threaten her own indoor record. Gavin continues to knock chunks off his indoor PB … having run an indoor PB of 2.05.07 in the Northwest Games just before the start of the new year, Gavin lowered this further at the Galway indoors in a time of 2.02.32 and today knocked a further slice off it with a time of 2.01.59 – only a matter of another couple of races now before Gavin goes sub 2 minutes.