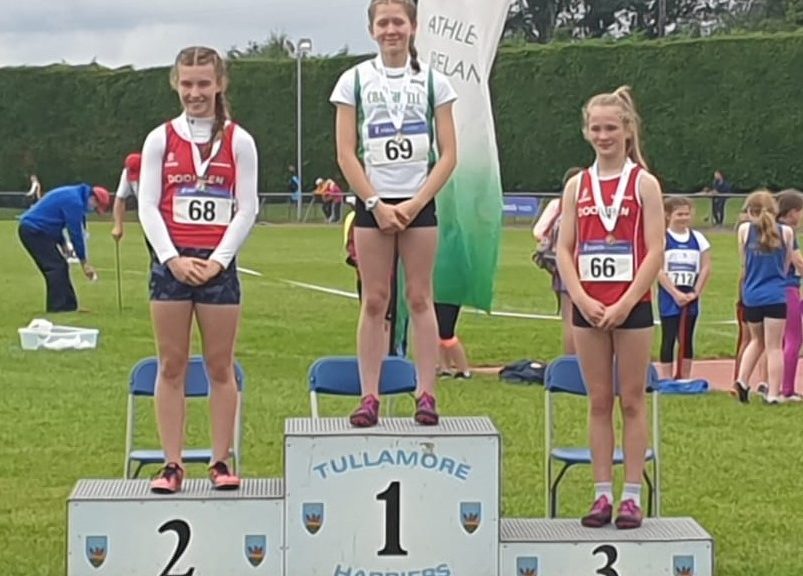 The third and final weekend of the National Track and Field took place on Saturday in fine conditions. This section was the u9-u13 finals and also the Combined Events. Once again we had a memorable day with many incredible highlights. This was a great end to a very successful championships and we added three Gold and two Silver Medals to our total from this years National Juveniles – to make for 20 medals in all! It should be interesting when the final medals table is totted up!

[There are a few results not available yet – notably the underage long jump – will update this report as I get them – let me know of any results or athletes I missed!]

The u9 events are done in “pairs” as team events and Craughwell duo of Conor Mannion and Jack Hibbitt proved unbeatable on the day. They started off with an excellent win in the 60m, where Conor ran an exceptional 10.19 to win his heat and Jack ran a strong 10.38 for 3rd in his.

After the sprint action of the AM you would think the two lads would be tired – no chance! They both ran absolutely BRILLIANT legs in the 300m – Conor taking second in his heat in 52.55 despite a slight stumble and Jack showing unbelievable character to fight back and win his heat in 53.84. They each were in battles with lads from the same club to make for a thrilling contest – when the times were totted up, the Craughwell lads won a fantastic Gold. Click on the video below to watch the two races – well worth a watch!!

Gold and Silver for Rachel Warde!! 🥇🥈

One of best executed races of the championships was an exceptional 60mh by Rachel Warde, where she took Gold in a brilliant 9.76s. Rachel got out well and was first to each hurdle. She knew she had it in the sprint for the line and could even start to celebrate 5m early!! A brilliant moment and her immediate reaction was to run over to her dad and co-Coach Ronnie (along with Evan and others) for a great hug – it was clear how much it meant to both!!

Watch the full race below:

After a heat and race in the 60m and a heat in the 80m, Rachel must have been feeling the drain, but wasn’t showing much effect as she lined up for the 80m final. In the race, Rachel won Silver in another performance of great character with a time of 10.90. She got a pretty decent start but wasn’t able to hold off the exceptional girl who took came through strongly and took Gold in 10.59. What a brilliant day for Rachel!

Silver for Hoade as Penney just misses out!

Sean Hoade and Conor Penney took their considerable athletic skills to the u14 Combined Events today and both were right in the mix in a classic battle! Sean was just faster than Conor this time at the hurdles – edging it 12.08 to 12.21. In the long jump again Sean was just ahead of Conor, 4.89 to 4.86 but were both behind an exceptional 5.57 from a Leevale athlete. In the Shot, Sean threw a 9.92m while Conor managed 8.17. A critical event was the high-jump and here we found out just how good this Leevale athlete was, as he cleared an exceptional 1.69 – a height only equaled by Conor.

Dad Joe’s cheer could be clearly hear on the stream as Sean scored a massive new HJ personal best of 1.57m to stay right up in the Silver medal position with only the 800m to go. Conor was firmly in Bronze with a decent lead. In the 800m, the Leevale athlete took a large early lead but Sean had an absolute stormer of a second lap, catching the Leevale athlete in the last 100m and really putting a gap on him. In the end, Sean ran 2:31 and missed out on Gold by a second – so close!!! Conor ran 2:58 – he knows that distance is something he needs to work at but has yet to find the love! He missed out on Bronze by just 5s! A brilliant performance from both lads!!

The other results are listed below – I’ll add some words on later – each had exceptional performances. Some of note are the brilliant combination of Grace Glynn and Roise Beatty in the u9 Long Jump and Lincoln King and Sean Colleran who came 5th in the u11 60m sprints. All the kids did fantastic, to make it to this level is something else!!