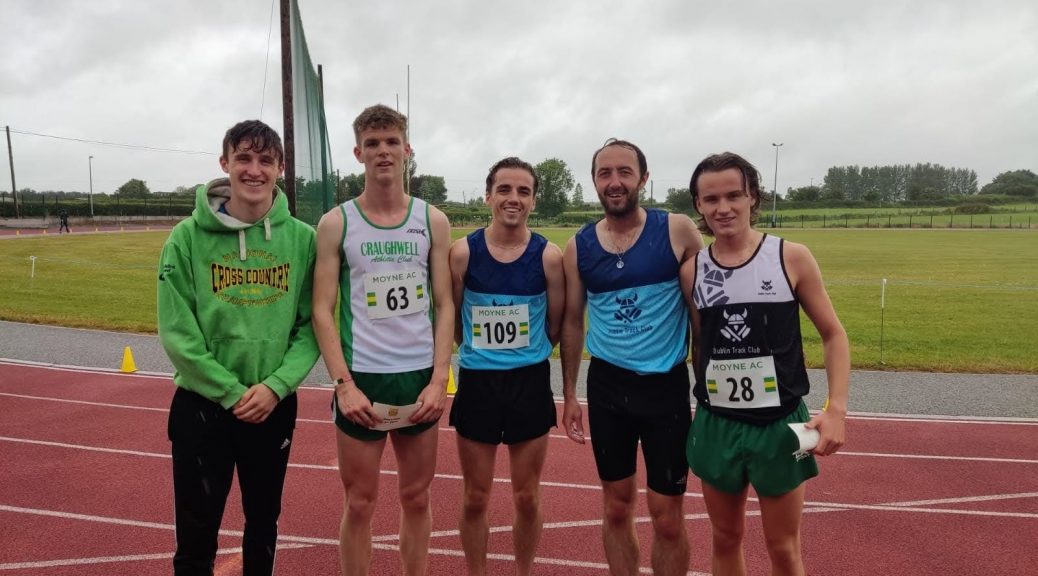 Five Craughwell AC Athletes made the trek to Tipperary to the amazing facility of Moyne AC for their annual Summer Games today. The host club couldn’t have been more welcoming. They have built an absolutely fantastic facility and gives us some idea of what we can realistically have in Craughwell over time, a great credit to all involved.

Many of the fields were a little down in numbers on the entry list, but the standard was quite good. One factor of the pandemic is that people are entering races to “book” potential spots in case they might run and this makes it hard for organizers to manage. The conditions were less than ideal – heavy rain at times, but at least it was not that windy.

Oisín Davis and Gavin Cooney lined up in a Goldilocks field in the 800m (not too hot, not too cold!) which saw the A and B heats combined for a good sized crew on the 4-lane track. Oisín has been chasing the sub-2 minutes for the last couple of years but he finally removed the monkey from his back on Sunday with a fine 1.59.77 finish time for second place and can push on from there. The tactic on this occasion was to delay his kick until 200m to go and it seemed to work as he was able to close strongly. Gavin was right on Oisín’s heels till 600m, but tied up slightly over the last 200m to finish with a solid 2.04.67 for 5th. Oisín joins Seán and Kyle as the third junior in their training group to break the 2 this year.

Sinead Gaffney lined up in the 1500m in a small but strong field. It was an unusual race! The start was fast and Sinead left a 10m gap develop in the first 300m between herself and the second placed athlete, who had a similar gap to the first placed athlete. The leading group of three ran the remainder of the race in the same order, with more or less the same small gap. Sinead dropped off a little but then ran the fastest final lap in the field and I felt at this stage she would take at least second, but the effort into the elements took it out of her and she was unable to push on in this occasion. She finished with a fine 4.49.22 for 3rd, her second fastest time ever.

The women’s long jump was won by Laura Cunningham who showed fine form again, leaping over the 5m mark 3 times with a best of 5.09m which took first place. This is the 3rd competition within 5 weeks that Laura has leapt over 5m, fantastic consistency that beckons well for the remainder of the season.

Kyle Moorehead was up next in the Mile. Peadar’s club Junior record of 4.29 was in the back of Kyle’s mind before today. There was a smaller field this year and legendary DTC supremo Feidhlim Kelly hauled on his spikes with zero warmup and hobbled his way to the startline to pace the field through 800m. Well, 800m was the plan but he decided he had enough by 600m and got out of the way of Daniel Stone who took it home from there! That first 600m was by far the fastest of the race. Kyle started out well, trailing DTC/Raheny man Stephen Fay before moving into second place at 900m, Kyle started to tie up a little then and held on well to finish 3rd in 4.44.96, winning a nice prize for his trouble!. Peadar’s record is a good one and gets to live another day!