The national 10K Road race was held yesterday in Athenry in slightly breezy but otherwise ideal conditions.  This race was a combination of my two favourite events in the year – Athenry 10K and the National AAI 10K.  355  runners managed to complete the fast course.

Race Winners
The race was won by legendary Clareman Seamus Power in 30:28 who just pipped local star and champion of 2006 and 2005 Paul McNamara by 5 seconds at the end.  2007 Champion Alan O'Shea was about 45 seconds back in 3rd place.  Seamus got off to a great start and though Paul pulled him well back, he ran out of road trying to recover the lead he gave away in the first half of the race.

Orla O'Mahony of Raheny Shamrocks won easliy ahead of the rest of the women in  35:20, a minute and a half ahead of her nearest rival.

Craughwell Results
It was a great performance by the Craughwell team with many of us surprisingly scoring PB's.

The first 4 men scored quite respectably – coming 8th overall and ahead of strong clubs like Sligo AC and GCH.   Martin was 4th in his age category which was unfortunate for him as he was very close to an elusive national medal. 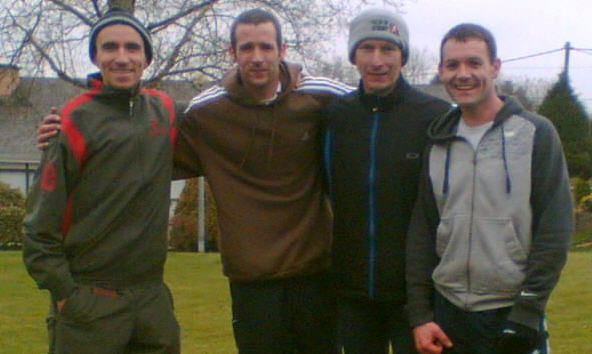 Craughwell Runner of the Day: Tony Nevin "Life begins at 40"
We all know how hard it is to break a time barrier, and in 10K running the most famous wall is the 40-minute one.  Well done to Fit4Life supremo Tony Nevin who smashed it, coming home in 38:05 – this is another breakthrough run for Tony and now he will improve further from here on in without the shackles of a 40 minute mental block hanging over him.

Maura Egan put in a superb run to come home in 49:16 as our first Female runner while Martin Corcoran led the men home as usual in a solid time of 33:55.

Good stuff Johnnny Lane for joining the sub-36 club picking up some great scalps along the way.  Johnny was desperate to dip in under 36 and after some mental math at the 8th Kilometer mark realised that he was under serious pressure if he was to make his goal.  He put in a simply astounding 9th kilometer – 3:05 in order to smash his goal – running a 35:42.  This kilometer was probably up there with Seamus Powers for the same leg.

Also it's great to see Tony Fitzpatrick coming back after his very serious knee surgery and just to complete the race was a great achievement.

Other Notable Runs
Glancing through the results shows some great performances all over the field, but a few real Jaw-droppers for me personally were:

Gripe of the Day:
This is possibly the highest standard road race in the country and it was happening on our own doorstep.  To me it seems a pity that we weren't able to field more of the stronger Galway runners to make things more interesting at the top.

It seems like the top lads are a bit wary of each other and through pride or whatever tend to avoid running races where other good runners are involved.

For example a full-strength GCH team of Gary Thornton, Gerry Ryan, Mike O'Connor and Conor Moloney would have probably scored about 1:27 (guessing that Thornton and Ryan would have been behind the top 2 – on their day either might well have won it themselves), and could well have taken the team gold.  Now it could be that all the above 3 were injured or couldn't run for some other reason in which case I'm talking through my hat again.