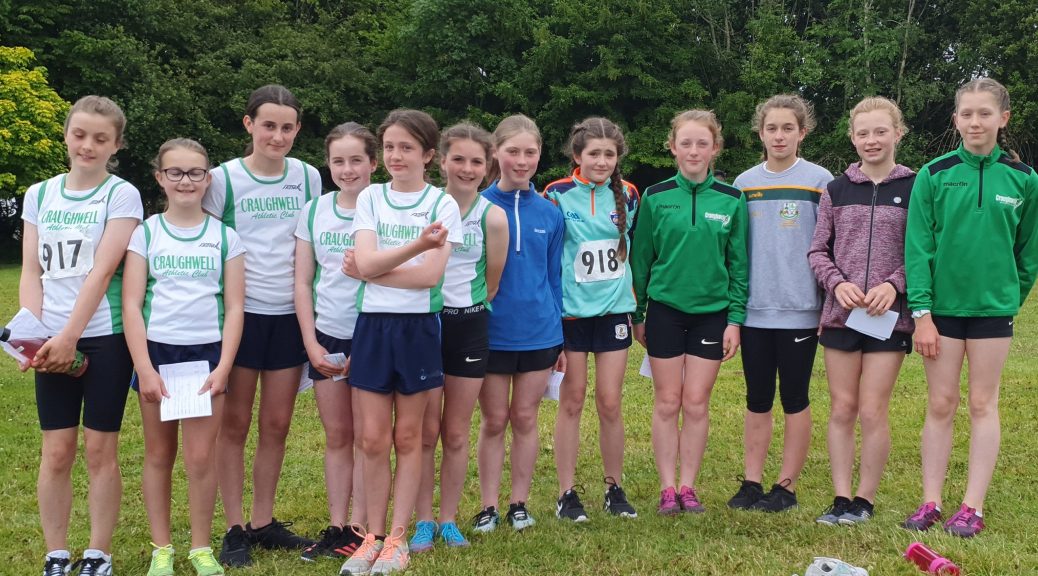 After a scorcher of a few weeks we were totally unprepared for the random downpours on Saturday as the day alternated between grimmest November rain and random spells of sunshine. However the fun was undampened by the weather and a fantastic day was had!

The U12 Coaches are really proud of our U12’s, some of these events were very new to them. First time competing in shot, high jump and hurdles! Special shout out to Maya Gorecka, who only took up athletics a few weeks ago and this was her first ever competition!

Alan Hallinan again showed brilliance in winning Gold in the 60m Hurdles a fine 11.43 time. Alan backed this up with an incredible 4m15 clearance in the Long Jump to also win Gold.

Alan followed this with a fine Silver in the 600m with a 1.50.75 time in a razor thin finish! Alan Warde has been chasing the magical sub-2 for a long time and he finally smashed it on Saturday with a superb 1.54.45 6th place finish, leading home his teammates Oisin O’Donovan, Charlie Daniels and Colin Haugh to round out 4 in the top 10!

Killian went one better in the Javelin, showing fast hands and good power to win a Silver medal with a 15.97 throw.

Our U13 athletes as ran, jumped and threw their hearts out. There were personal best all around and a massive highlight being our very own Rachel Warde ran to a new Championship Best performance in the 60mH!!

With the top 8 athletes in each event qualifying for the Connachts our U13’s will be very well represented. There were far too many fine performances to list them all, but some of the notable performances are below.

Rachel Warde won her first Gold of the day – she had been thinking of the record of 10.80 but the weather turned terrible at this time so that was out – she still won in a fine time of 11.36 from the large field of over 35 competitiors.

Rachel’s good friend Lauren Morgan won her heat in a time of 11.60 which was good enough to win Silver. Katie Leen came second in her heat with a superb time of 11.87, good enough for 5th overall.

It was in the 60m Hurdles that Rachel Warde really shone, winning Gold in a Championship Best Performance of 10.10 – a really superb run. Beth Glynn came 7th and Saoirse O’Donnell 8th.

Sam Casey made it a double-Gold with a fine clearance of 1.25, and followed this up with a fantastic Gold in the Long Jump with 4.22 clearance. Sam’s teammate Kai Waters won solver, also clearing the magical 4 meter barrier.

In the Shot Putt, Ethan Stace and Ava Doyle both won Gold medals for their efforts.

We almost repeated the feat in the Javelin with Ethan winning Gold and Ava getting pipped into Silver on this occasion. Tom Malone won Silver and Megan Smith came 5th.

Well Done to all our fine athletes. Next up is the Connachts on Sunday July 18th

Kiera Mernagh had a super day at the throws, winning Gold in Javelin and Silver in Shot putt.

Conor, Gold in High jump, jumped an incredible 1.70m and mark a new county record and added silver in 75 meter hurdles. Declan O Connell, Gold in 1500m and another county record with a stunning 4.43.55. Declan sealed the victory with an incredible 68 s final lap. With that kind of speed endurance he will be hard to beat. Sean Hoade won an incredible triple-Gold in Long jump, 200m and 75m hurdles.

Connachts takes place in 2 weeks and I’ve no doubt this group of amazing young athletes will up their performances even more to represent both themselves and their club. Up Craughwell

At this age the competition gets tougher and medals harder to come by! Despite this, Ella Farrelly won Gold in the LJ with a 4.74 clearance and Silver in both the 80mh and the 100m (13.31).

Isabel Schukat came 4th in the High Jump with a fine 1m30 clearance and also came 10th in th eLj clearing a fine 4.05 ahead of her teammate Alyssa Salvo.