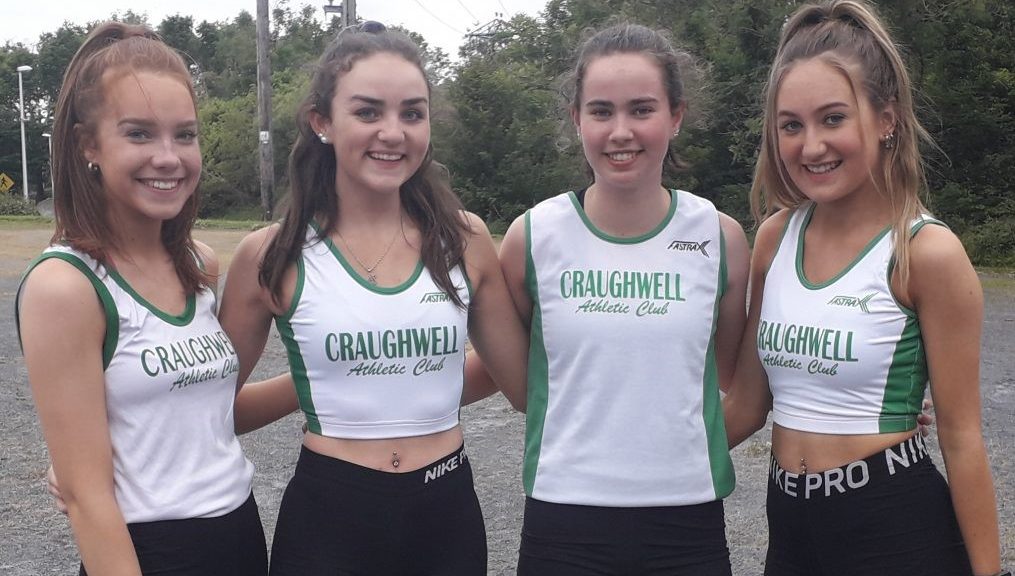 The Galway relays took place for the older age groups Thursday evening in Dangan. While the need to hold them on a separate evening to the rest of the track and field was due to the pandemic, it actually turned out to be a great way of doing it as it was a short and snappy evening and athletes did not have to hang around all day to wait for relays. Well done to Iain Shaw and Galway County Board on a great event.

I will cover just the ages from u16 upwards as the U12-15s will be covered by a separate report … best of luck to all of the U12-15s in action today in Dangan in their individual events.

We had a new look U16 team in action on Thursday with Ella Farrelly and Alyssa Salvo stepping up from the U15 age group to partner with Adara Salvo and Holly Shaughnessy. The girls ran brilliantly to take 3rd place in a time of 56.12 and in the process qualify for the Connacht finals. It was the first time that any of the 4 girls ran with any of each other on a relay team, including the Salvo sisters – very impressive as the baton exchanges were all very smooth and snappy.

Next up the U17 Girls 4x100m with the team lining up in order of Ella Lyons, Siofra Davis, Erin Kelly and Adara Salvo stepping up an age to anchor the team and running a super race to take the silver medals in a time of 57.15. They were followed quickly by the U18 Girls 4x100m where Jade Moorhead and Leonore Church stepped up with Hannah Whelan and Sophie O’Brien. Again it was a new-look team and they ran a super time of 55.15 to take the silver medals in between 2 GCH teams.

It was a day of unfamiliar line-ups with the boys U18 team also featuring a quartet who had not run together previously with Lukas Schukat, Evan Quinn, Andrew Power and Evan Hallinan and another super performance to take the silver medals in a time of 51.56. Final relay of the day provided huge excitement where we had a combination of U17 and U18 girls in the 4×400. Hannah Whelan led the team off with a strong opening lap, handing off to Jade Moorhead for the second lap who stormed around the track to hand off to Leonore Church for lap 3. Leonore put in another strong lap to hand-off to Siofra Davis for the final lap. Siofra was around 20m or more behind the leading runner at this point and on every stride was cutting into the lead. Blazing down the home straight, the excitement mounted as Siofra was rapidly closing down the GCH girl but a late surge saw the GCH athlete hold on for gold by a second and a half – with Siofra anchoring the team to silver in an excellent 4:29.26 only a few metres behind. The girls performance was even more impressive as the 4x400m was run directly back to back with their 4x100m relay and 3 of the girls had raced in the 4x100m.