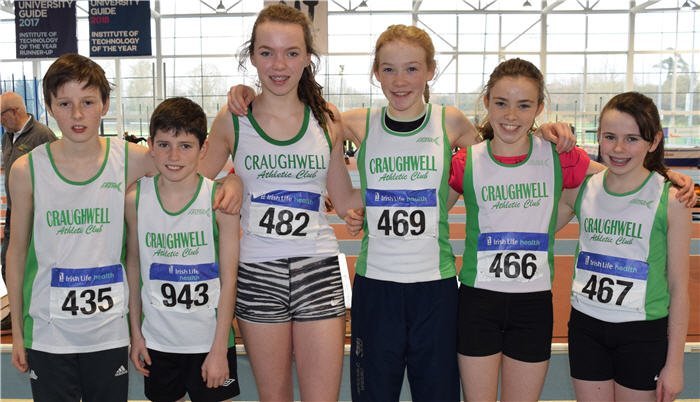 A number of our talented athletes made the short journey to Athlone IT on Saturday for the National Pentathlon Championships in Athlone IT with some impressive performances.

The day kicked off at 10am with the U14 Girls hurdles where Clodagh O’Meara blasted to a time of 10.79 almost a half a second faster than her PB from last weekend at the Galway indoors. Fauve Aylmer was equally impressive in the U14 Girls hurdles competing in the event for the first time and recording a very good 11.44. Also at 10am Ellie Cronin got her U16 pentathlon underway with a decent 4.28m leap in the long jump and followed it up with a brilliant 10.07 hurdles. Both Lukas Schukat and Saoirse Moore kicked off their day with the high jump at 10am where Saoirse was jumping very well at the early heights clearing them comfortably but had to settle for 1.36m on this occasion as she clipped 1.42m with her heels on each attempt to bring it down. But very positive as she was high over the bar each time and has only a small glitch to correct to get her heels out of the way. Lukas made sure he got his heels out of the way with a fantastic series of jumps to obtain not 1, not 2 but 3 PBs in the high jump clearing 1.60m, then 1.63m and finally 1.66m to win the high jump before exiting at 1.69m.

And Cian Lavan got his day underway with a brilliant 10.42 in the hurdles, almost a second faster than his Galway time a week ago and followed it up with a fine series of high jumps to clear 1.41m before exiting at 1.44m just shy of his PB of 1.45m from a week ago. Cian added a decent long jump of 4.11m to stay in the top half of the field in his age group while both Clodagh and Fauve leaped excellent jumps of 3.64m and 3.49m and Saoirse and Lukas leaped a brilliant 4.25m and 4.48m. Saoirse was in blistering form in the U15 hurdles racing to a splendid time of 10.55. Clodagh and Fauve also did very well in the unfamiliar high jump with Clodagh leaping 1.20m and Fauve 1.15m. Clodagh picked up a bad knock on her first attempt at 1.25m so passed on her final 2 attempts in order to recover for the 800m.

Meanwhile the senior and junior women’s program got underway at 11.35am with the hurdles which saw Laura Cunningham race to a PB of 10.32 seconds over the 2’9” height. It was Laura’s first time over the hurdles since taking a heavy fall in the Irish Schools Pentathlon finals last November so it was great to see her navigate them with ease on this occasion. Ellie’s high jump got underway around the same time and she cleared several heights comfortably right up to 1.49m but struggled to get her heels out of the way in time at 1.52m and exited at that height but again can take some solace from being well clear of the bar and just needs to get the heels out of the way quicker.

Laura’s next event was the high jump which ended up taking almost 2 hours as the competition started at 1.10m such was the variation in standard amongst the junior and senior competitors. While the high jump was underway, a number of shot putts were completed including the U14, 15 and 16s where Clodagh ‘putt’ the shot out to 5.41m, Cian to 5.94m, Lukas to 6.00m, Fauve to 6.02m, Saoirse to 6.32m and Ellie to 6.38m. And still when the junior/senior high jump was ongoing, the 800s got going for the younger ages with some great performances from the club. Saoirse raced to victory in her 800m in an excellent time of 2.42.96, crossing the line with arms outstretched and a lovely smile on her face. Ellie ran a very measured race in the early laps before accelerating at the bell to record a brilliant 2.41.68 and 2nd place. Lukas ran strongly on the first 2 laps before fading a little when lactic acid took hold but still recorded a decent 2.52.64.

Clodagh set off in heat 1 of the U14 girls running a blistering pace on the early laps and finishing off with a speedy final lap to record a PB of 2.36.03 while Fauve was equally impressive, tearing off into a significant early lead and as she passed me at the 100m mark, still had the energy to casually enquire “is there much of a gap mike?” ?. Fauve held that lead right through to the end to record a brilliant 2.33.85. And in the U14 Boys 800m, Cian raced into an early lead before being overhauled on the final lap but held on for second place in an excellent 2.33.77. 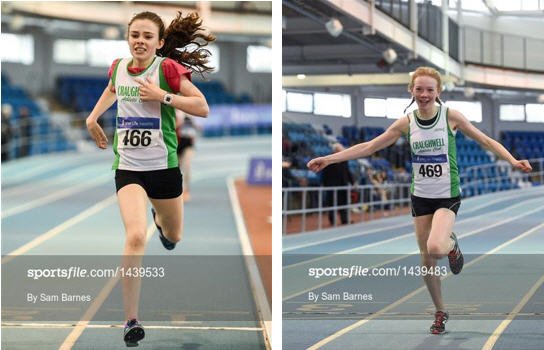 Meanwhile back to the long running women’s high jump event where Laura was waiting patiently for the bar to reach her opening 1.46m height. When it did, she cleared it very comfortably and went on to repeat this at 1.49m, 1.52m and 1.55m, looking like she would eclipse her 1.65m PB. However, the length of the 2-hour high jump competition probably caught up on her as she clipped the 1.58m height 3 times to exit – but nevertheless very encouraging as her earlier jumps were very comfortable. Transitioning almost immediately to the shot putt, the officials unfortunately got the competition underway with the wrong weight, using the 3kg rather than the 4kg and Laura got a massive PB of 9.70m before the problem was noticed and the throwers had to start again. Laura’s best on the day with the 4kg shot was 7.23m down slightly on her PB from the recent Galway’s. Onto the long jump where Laura hit the board perfectly on each jump with a best of 4.56m, great preparation for later in the indoor season to get the mark right on the board each time.

The final event of a long day the 800m came at 6.15pm and almost 7 hours since Laura’s first event at 11.35am. Very hard to stay focussed for that length of time but Laura put in a brilliant effort in what is not one can safely say her favourite event and ran a PB of 2.45.7 to take 4th place overall in the Junior Women Pentathlon with a point’s score of 2633. Ellie’s series of performances also yielded her a brilliant 4th place in the U16 Girls with a total of 2532 points. Saoirse placed 6th in the U15 Girls with a score of 2281 points while Clodagh and Fauve placed 6th and 7th in the U14 Girls with scores of 1965 and 1848 points. And in the boys events, Lukas placed an impressive 6th with a total of 1867 points while Cian was a brilliant 5th with a total of 1924 points.

So all in all, another great day for everyone. A little long for the older ages but nonetheless a rewarding day.