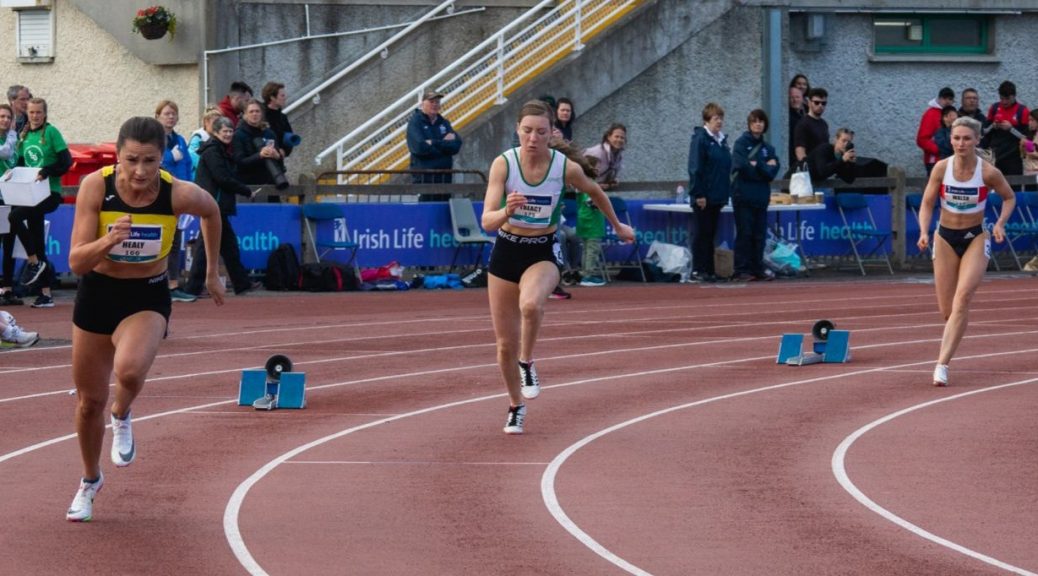 Wind and rain were present as the National Senior Athletics Championships took place last weekend in Santry and there was a record Craughwell AC entry of senior athletes. Among the many excellent performances the highlights were Sinead Treacy making the final in the 400m and Patrick Noonan’s 6th place finish in the steeple.

[Many thanks to Rob McDonnell for the pictures of Sinead in this article – check out his instagram page for photos “robphotographs“. Hopefully he wasn’t injured on the weekend, we’d rather see him running than taking snaps!]

The standards are always sky-high at Nationals, but with places up for grabs in the World Championships in Oregon in 3 weeks time, and the European Championships in Munich shortly after a who’s-who of Irish athletics were out to impress.

The action started on Saturday with Patrick Noonan in the 3000m Steeplechase which was a straight final.  Patrick is new to the event but he fearlessly settled in the front group of six.  After a good first lap his inexperience at hurdling barriers in groups started to tell and he found himself losing a metre every barrier which he had to work to close, expending a lot of energy.  At one point the leaders pressed on and a slight gap opened to Patrick which he never quite managed to close in the heavy wind.  In the end he finished an excellent 6th place in 9:54.91 with a lot of valuable lessons learned. This is definitely a good event for Patrick and he will take the lessons forward to the u23’s on the 17th July.

Next up was Kyle Moorhead in the 800m.  Kyle found himself in a heat with 2020 Champion Harry Purcell, a 400m specialist.  Purcell went straight to the front and then slowed the entire race up meaning that a fastest loser qualification spot was not going to come from this race.  The sprint kicked off with 150m to go and Kyle ended up 4th in his heat and missed the final, but again learned valuable lessons.

Jade Moorhead was next to compete for Craughwell in the High Jump in her Senior Debut for the club.  Jade leaped an impressive 1.60m in incredibly blustery conditions to place 8th overall in her first National Senior championships. The wind measurements for the women’s triple jump which took place at the same time showed wind readings of  +5.8m/s to -1m/s and for a time it looked like the high jump would be cancelled as the uprights kept blowing over.

Sinéad Treacy was Craughwell’s sole sprinter in the 400m heats.  Sinead looked imperious as she tracked multiple national champion Phil Healy to close in 57.10 for an automatic qualifier and book her place in the final.  The final took place on Sunday and was televised on RTE2.  Sinéad came into the race with the slowest personal best, but showed us once again why she is known as a big-day performer finishing a narrow 6th out of the 8 finalists with her time of 56.49 just a fraction outside of her club record.  An incredible performance on a blustery day.

Sinéad Gaffney competed in the 1500m on Saturday and in a tactical race put herself in a fantastic position to qualify with 150m to go.  The last 150m were really tough however and she dropped back slightly out of the qualifying positions to finish 9th in 4:43.95, a brilliant time in those conditions.

Jack Miskella was in the last heat of the men’s 1500m, a race featuring the likes of Paul Robinson.  Fearing a tactical race, Jack decided to roll the dice and took the lead to drive on the pace and open the option of a fastest loser slot.  He led the field through 1100m but then the inevitable flood of athletes came around him and boxed him in.  In the end Jack finished 7th of the 16 competitors in a fantastic run.

Craughwell’s final competitor to take to the field was Jamie Fallon in the 5000m.  The field was incredibly stacked and Jamie ran what can only be described as his best ever 5000m to finish in 14:41 as 15th of the 57 competitors.  This was just 6 seconds off his club record in windy conditions and he was ahead of no less than three European cross country medallists.