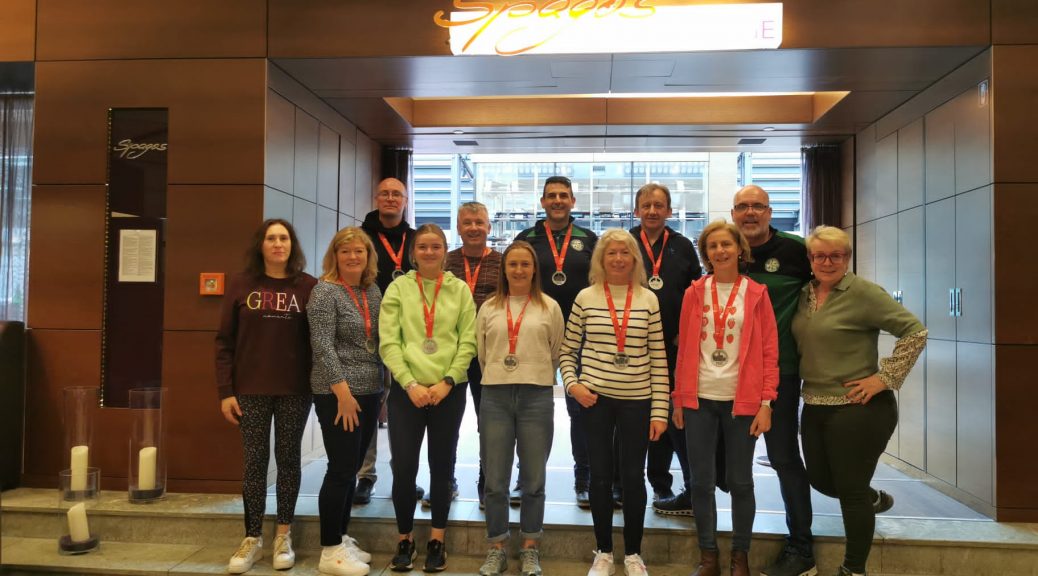 After the last few years of postponed and cancelled races the chance to take part in a foreign half marathon was the boost a lot of us runners needed , Berlin did not disappoint and Craughwell AC travelled along with DSD and Marlay Parkrun clubs to run the fast flat route around the city.
Most club members utilised the bus service from Craughwell or Galway to the airport arriving around 5am on Friday morning for a 7.20am flight, everyone was in great form and even the delays in security did not dampen any spirits.
We arrived in Berlin and made our way by public transport and with the help of “Mr Google” to our destination hotel at Alexander Platz , proving be an ideal location to explore Berlin and ideal for race day due to proximity to start and finish.
We dropped bags at our hotel as checkout not available to later in day and travelled over to the expo to collect numbers for the race. The expo was set up in an old aircraft hangar / airport and there was plenty of running apparel on display to peruse or purchase. Some enjoyed the non- alcoholic  Erdinger Beer that was available as refreshments as one of the sponsors to the race.
The Craughwell AC contingent all stayed at the same hotel in Alexander Platz ParkInn ,  the decathlon store proved popular which was “adjacent to the hotel”.
Day 2 was to ourselves as we had the number pickup sorted so people took hop on/ hop off tours or used electric scooter to view the tourist spots. We dined in nearby restaurants and relaxed later at the hotel. There was great fun and laughter and everyone was excited but relaxed about the race ahead.
Aoife, my sister Valerie and I met that Saturday morning and went for a light run to the Brandenburg gates and back to check out the route finishing and start areas , it was very cold and there was a strong wind blowing, my hands were freezing when I returned prompting a few late changes to attire to be worn at the race and late purchases of under-armour by a few as there were minus figures in temperature being experienced. The city restaurants were very busy in the evenings with all the runners about and we were lucky to get in and enjoy great spots.

We arranged to meet everyone early on race-day morning after our breakfast for a few photos prior to the race and then runners made their way to the start, there were a number of waves for the start so some started off earlier than others, first wave was around 10.05.

Myself and John Fitzpatrick used the 3km from hotel to the start as our warmup but the majority of race runners arrived from the public transport into the Brandenburg gates which was the finish line for the race and close to the start line the set up was so well organised with signage and barriers, drop off trailers for bags, plenty of portaloos and it was easy to navigate to the correct wave start. Particularly impressive considering over 33k runners were expected.  We manoeuvred ourselves to start just in front of wave C in front of the 1.40 pacer and behind the 1.35 pacer. A small sprinkling of snow fell as we lined up for the countdown to the start almost as if it was timed. We discarded the throwaway long sleeved tops we had to keep us warm until start. Weather was cold but not in the extreme and there was no wind on the day , The wave proved to be perfect as we had no delays in getting through people as everyone moved on at same pace and there was plenty of room on the roads. The atmosphere was absolutely electric right from the go, crowds lined the streets cheering and making noise, bells were rung, bands were playing, music blaring, it never felt like a half marathon distance with so much interaction with the crowds. My previous PB for this distance was in 2012 at 1:40:47s in flatline Athlone, I needed to run an average of 4m40s per km to give me some breathing space to get under 1:40mins, I managed a 4m36s average pace which gave me a strava half at 1hr37min but an official time of 1.38.58 well under my PB , I was delighted. John finished 90secs in front of me with a great run also. Craughwell AC finishers were John Fitzpatrick, Noel Gorman, Brian Matthews, Aoife Mullane, Maura Walsh, Irene Fallon, Gerry Treacy, Colm McAllen, Aine Hardiman and Lucy Cunningham.
All runners ran very well, special mention to our youngest participant on the trip Aine Hardiman, a junior age 17 whom completed her first half marathon, a fantastic achievement and it a very respectable time. We also had a few great supporters Breda and Maura and videographer / photographer Paul on the route.

The route itself started at the park near the golden victory column and looped around the city hitting places like Potsdamer Platz and checkpoint Charlie and finishing through the Brandenburg gates, the route made popular recently with Eliud Kipchoge setting a marathon word record time of 2:01:39 finishing at the gates also. The après party was organised by Valerie and Brian whom booked us into a nearby bier house and we celebrated our runs with style finishing in the Kilkenny Irish bar. Lots of fun and plenty of laughter with a great group of people all weekend, it was a fantastic trip.