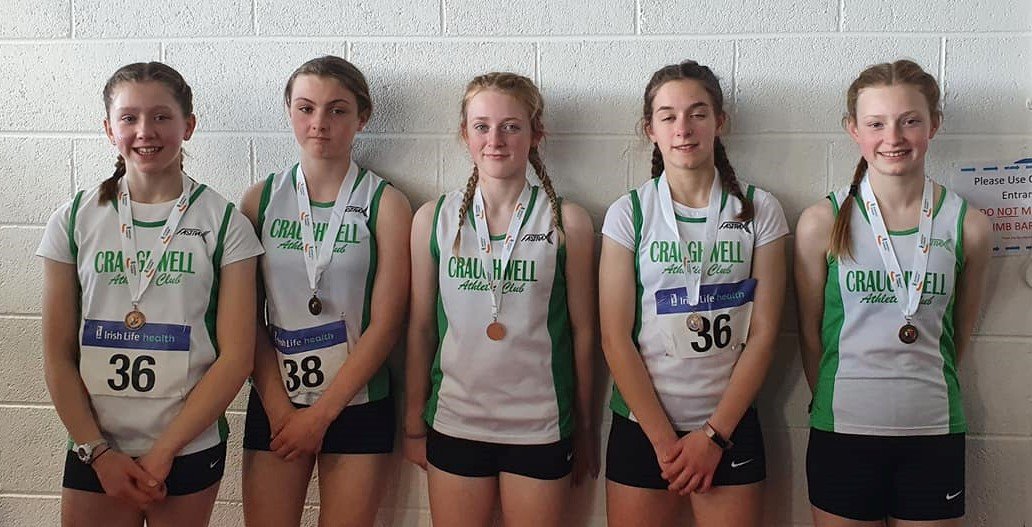 It was another busy weekend of Indoor action for Craughwell AC Athletes starting on Saturday with the final day of Juvenile action took place.  This last day, the focus was on the Triple Jump, Long Jump and the relays.  As is usual with the relays, there was high drama throughout with plenty of spills and action.

The Craughwell AC u12 Boys team of Sean Colleran, James Niland, Darragh O’Donnell and Lincoln King won their race in the 4x200m relay in a superb 2.01.27, however were edged out of the medals by three teams in the other two heats. They finished 5th overall which was a fine result.

The u14 boys and girls were involved in two of the most exciting races of the day, a tale of two photo-finishes.

First up were the girls team of Lauren Morgan, Rachel Warde, Aeveen Kelly and Katie Lean who cruised to a comfortable win in their heat with a time of 1:52.23, and qualified for the final. It was a seriously stacked final where any one of 5 different teams were capable of winning a medal.  It was a neck and neck race the whole distance with Craughwell and Middleton AC crossing the line together.  After a photo finish review, it was determined that Craughwell won the Bronze medal in a fine time of 1:50.39.

The u14 boys team of Darragh Simpson, Ethan Stace, Kai Watters and Tom Malone  also ran another extremely competitive race, qualifying for the final with the 3rd fastest time.  The final was an edge of your seat race with the lead runner changing a good number of times.  Craughwell  crossed the line at the same time as Bree AC.  Once again a photo finish review was required and it resulted in Bree taking the Bronze and Craughwell finishing in 4th by 5 hundredths of a second in 1:52.81. Heart breaking but the boys were very proud of themselves.

The hotly fancied Craughwell U15 Boys team of Conor Penny, Donnacha Lawless, Cuan Brady and Josh Whyte unfortunately made a slip up in the exchange and overstepped their zone, getting themselves disqualified in the heat.  You live and learn!

The u15 girls team of Lauren Kilduff, Keevagh Barry, Emma O’Donovan and Beth Glynn (stepping up) finished 2nd in their heat, but just missed out on qualification for the final.