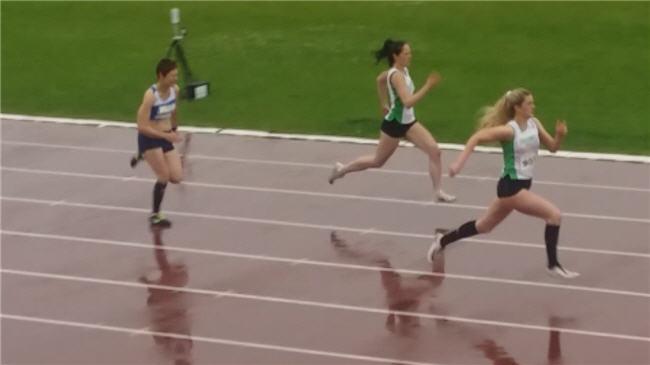 A small group of athletes made their way to meet number 6 of the Dublin Graded Meet last night, the first time this year that the club has taken part in it to my knowledge. The Dublin Graded Meets are a fantastic series of events with 8 meets taking place, one every second Wednesday from end of May through to August at 3 different venues in Dublin – Santry, Tallaght and Irishtown– and the officials are very welcoming to country clubs making the effort to travel up especially last night as thunderstorms greeted us as we arrived in Santry!

Ben Garrard was in flying form in the 800m where he ran a blistering season’s best of 2:01.02 – faster than his indoor PB of 2.01.88 from the Connacht Indoors earlier this year and pretty close to his outdoor PB of 2.00.35 which he ran in sunny conditions in the National League in 2017. It leaves Ben nicely poised to break the magical 2-minute barrier this summer if the weather conditions are right. 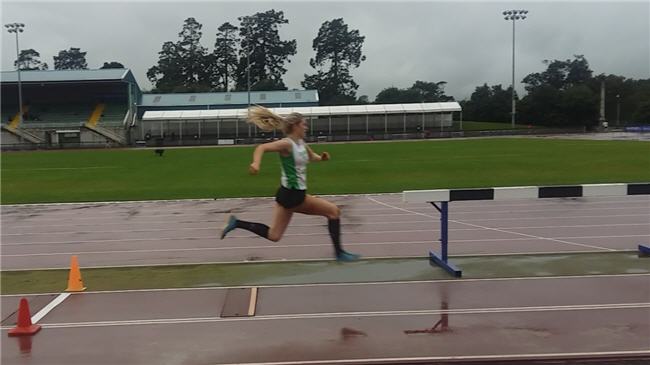 Laura mid-hop on her way to a season’s best of 10.31 in the triple jump

Despite the wet conditions, it was a good day also for Laura Cunningham, Lorraine Delaney and Shauna Tobin who all recorded season’s bests in their events. All 3 girls had eased back on the training and competition in the previous 9 months due to the Leaving Cert but are coming into form now as the season progresses. Laura raced to a blistering 13.16s in the 100m with Lorraine recording 14.39s on the wet surface – both excellent times into a +1 headwind on a saturated track. Laura later followed this up with a fine series of jumps in the triple jump culminating with a season’s best of 10.31 on her 6th and final jump. Shauna got to grips with a slippy discus on the wet night, spinning it out to a season’s best of 15.10.