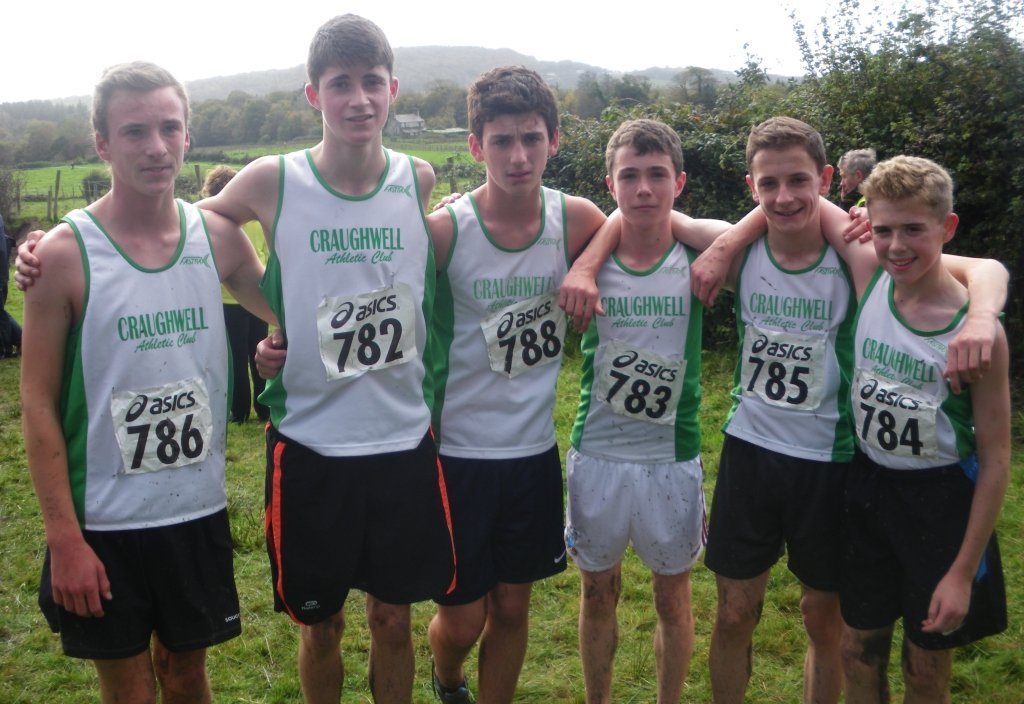 The club got its Connacht cross-country campaign off to a flying start in Calry Sligo with 4 sets of team gold and 2 team silver at the Connacht Even Ages Cross Country Championships today. As the boat bus departed from Craughwell hall this morning, the heavens were busy raining down on us – ominous signs of a tough day in Sligo. Fortunately it cleared a little on the way up and while still pretty wet, there were some dry spells also.

It was a mighty day for the club with all 37 participants (one of our highest ever) doing themselves and the club proud. The club took 4 sets of team gold and 2 sets of silver – definitely up there with our best ever performances. The U12 girls were the first to get going in the difficult conditions for their 2000m race. The course was laid out in a 1000m loop across 2 fields overlooking the picturesque Lough Gill with a steady downhill for half the course (nice) and a steady uphill for the other half (horrible!).

For the young U12s, it wasn’t the nicest of conditions to be running in but they put in an almighty effort to pack close to the front right from the go. As the race unwound around the course, Niamh Niland stayed in touch with the leaders and pounced as the race entered its closing stage to take the bronze medal in a high quality race. Jennifer Hughes was next in 5th place with a storming finish, followed closely by Ailbhe Miskella with another fine run in 11th place, Mia Waters in 20th, Sarah McCartin 21st and Sarah Woods 27th. When the numbers were crunched, Craughwell AC were announced the victors with a fine score of 38 points. This was a super result for the girls after their 2nd place finish last year with 55 points and the first time since 2004 that the club claimed the Connacht title in the U12 girls.

Next up, the boys U12 over the same 2 loops where the club put in a blistering performance to claim the silver medals in a score of 38 points. With 4 in the top 12, such a low score would normally take team gold but a super strong Westport team took the gold. Sean Cannon led the team home with a fine run to take 5th place and the team packed in after him with Kyle Moorhead 10th, Finbar McFadden 11th, David Lee 12th and Eanna McDaid 38th.

The U14 girls were off next into the wind and rain over their 3000m – a distance that was new for them all. The girls put in a fine performance to improve on their 7th place from last year’s U13s to take 4th place this year and qualify for the All-Irelands. The team were led home by Rachael Hughes in 17th, with Sineád Kennedy 26th, Catherine Noonan 27th, Amy Touhy 28th, Sarah Phillips 30th and Fiona Commins 32nd. 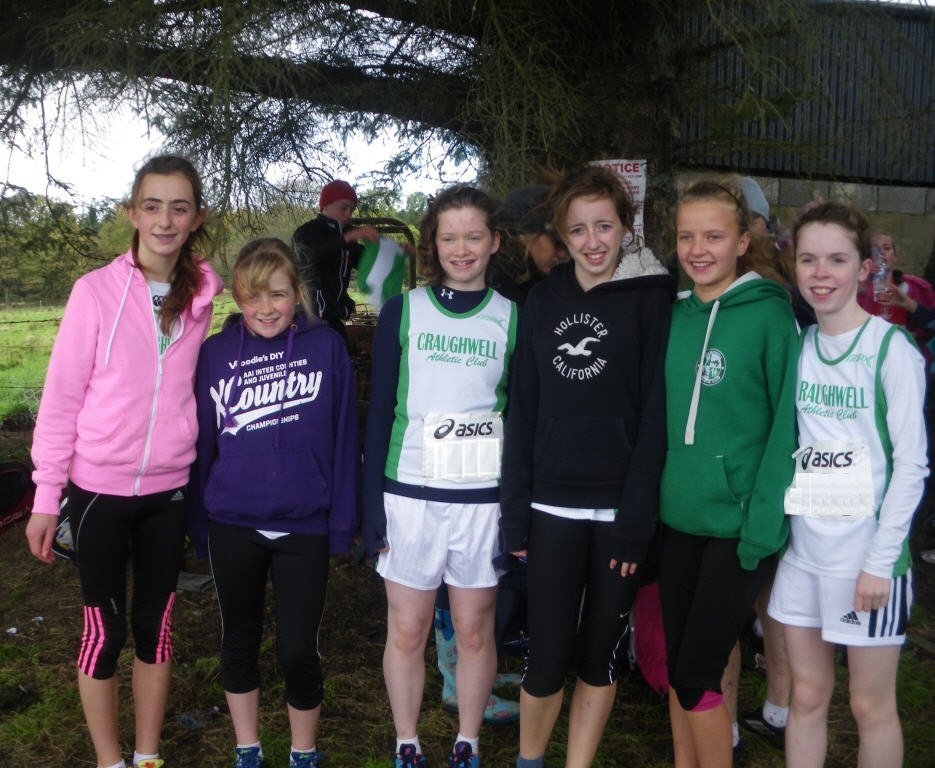 A strong U14 boys’ team took to the field led by Oisin Lyons who put in a magnificent performance to decimate the field and take the gold medal by 30 or 40 metres. Conor Lee was next in with another fine run on his return to cross country, taking 9th place. He was followed by Patrick Noonan in 18th, Luke Finn 20th, Gavin Forde 22nd and Sean Noonan 23rd. It was a fine team performance from a relatively inexperienced team and augurs well for the future. An interesting statistic is that the club have taken team medals in this age group in every year since 2005 taking 3 gold, 3 silver and 3 bronze in that time-frame. 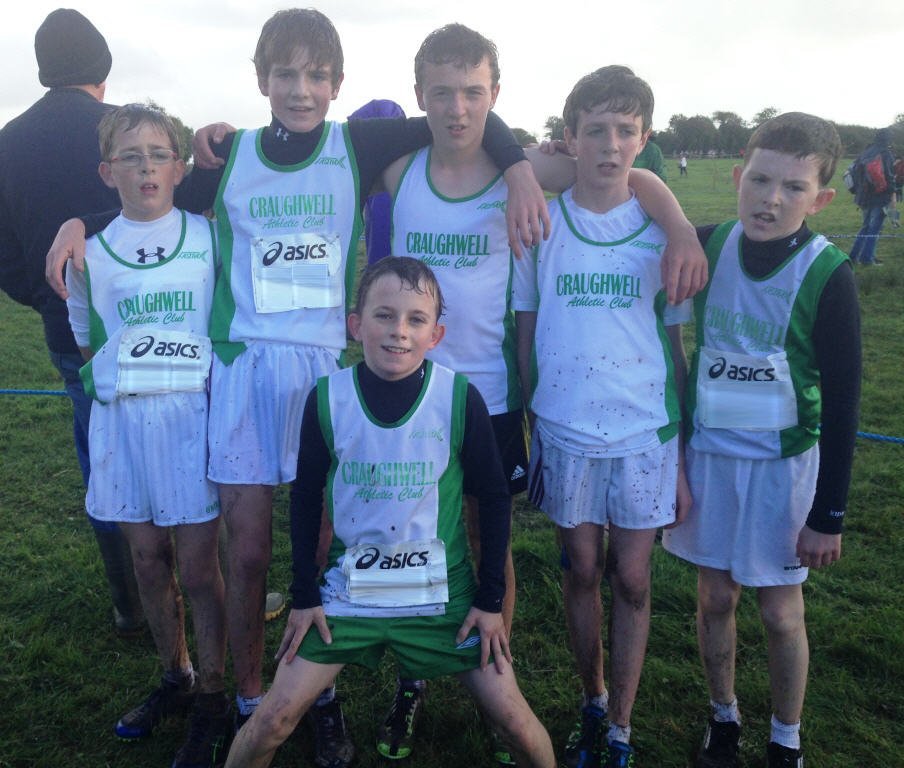 The U16 girls were off next over their 4000m distance. This is a particularly tough distance for this age group and given that the novice women’s distance is also 4000m, it’s something that should possibly be reviewed downwards as the boys equivalent is only 3/4s of the novice men’s distance. In any case, the Craughwell AC team put in a fantastic performance to take the gold medals from Sligo AC with a score of 34 points. This was the club’s best ever performance by an older girls cross country team, beating the previous best of U16 bronze in 2010. The team were led home by Dearbhaile Walshe in 6th place with Ciara O’Boyle making up fantastic ground to take 8th place, followed closely by Grainne McDaid in 9th and Aoife Greene in 11th. 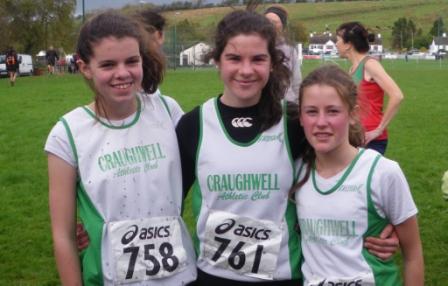 In the U16 boys 4000m, the group went out with the U18 and U20 boys 6000m race, something which suited everyone as it meant for a 30 or 40 strong race. Oisin Doyle had one of his best races in a number of years to stay with the U16 leaders throughput. Back a little on lap one, Liam Moran moved through the field in later laps to overtake Oisin and both lads had a very strong finish with Liam taking individual silver and Oisin bronze. Matthew Barrett and James Cahalane were in next, with Ben Garrard and Diarmuid Harvery also finishing strongly. Craughwell AC took the team victory, its 3rd time in 5 years to take the Connacht title in this age group and 4-in-a-row titles for this particular team when you trace back through the age groups.

As the U16s finished, the U18s continued their 6k race where Jamie Fallon was leading the way from all in the field, both juniors and U18s. Jamie continued to put yards between himself and GCH’s John Moroney to run out a fine winner. Matthew Moran was next in – 3rd overall between U18s and Juniors and 2nd in the U18 race. Keelan Ryan and Conor Gillen wrapped up the team scoring to give this team yet another Connacht title – their 6th in a row since U13s in 2008. Interestingly it is the first time that the club have won an U18 Connacht title, having won silver in 2010 and 2012. 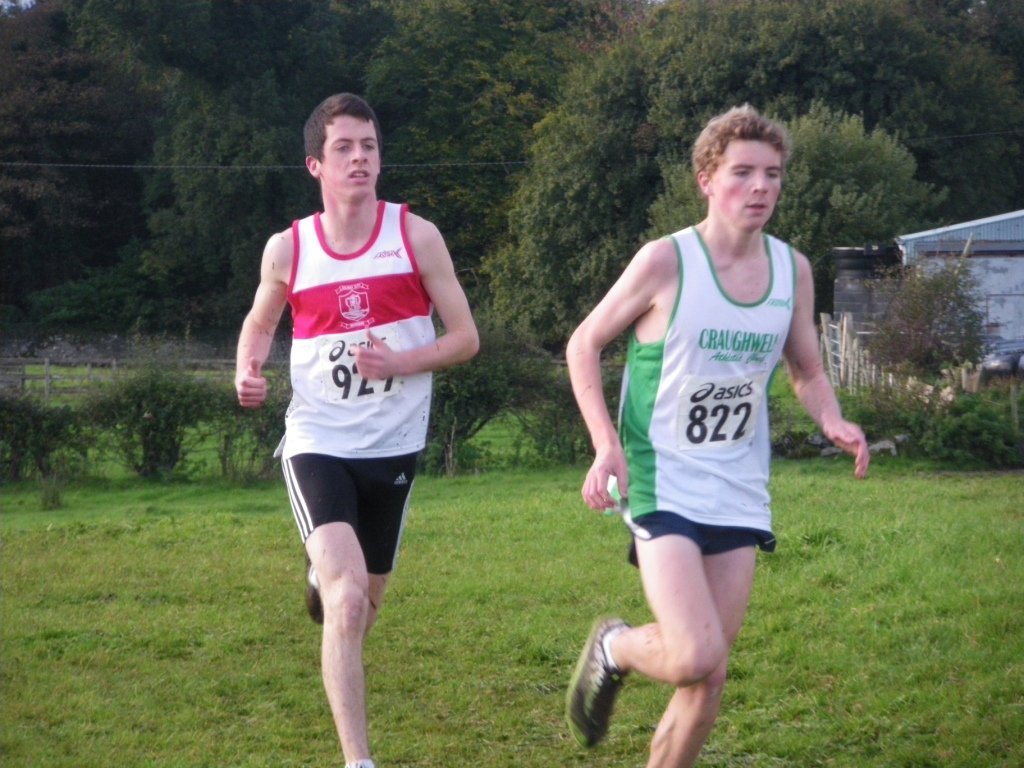 At the time of writing, I didn’t have a full set of results but the following are an incomplete set of pics of the provisional results that were posted up after the races:

The results have since been published and are here.