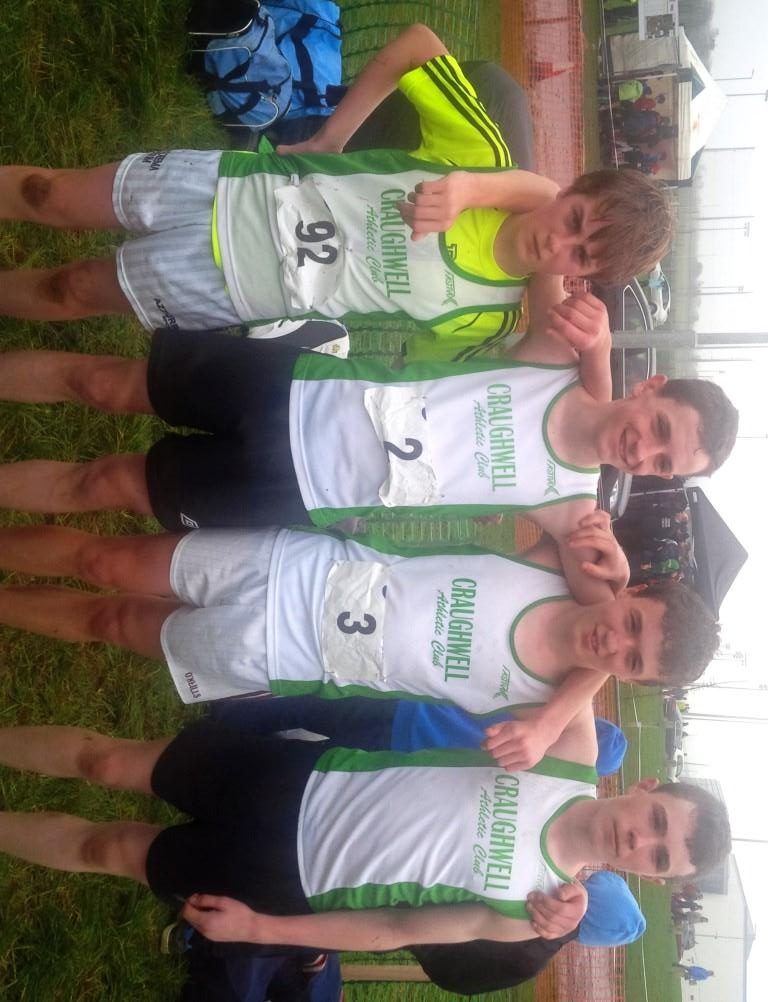 Many athletes from the club made the long journey down to Waterford for the National Uneven Ages Cross Country Championships. The Championships took place on a hilly course on the grounds of Waterford IT, with unanimous agreement that it was an incredibly tough course.

The day got underway with a superb run from Emily Miskella in the U11 girls 1500m. Emily is an U10 and after an outstanding primary schools cross country, made the stepup to U11s and performed heroically right through the season placing 2nd in the Galway championships, 5th place on the Connachts and 41st place in the All-Irelands, an exceptionally good performance out of age. In the same race, Aoife Kelly had her first taste of National cross country and put in a super effort in the race. Aoife is more of a sprinter and jumper and did superbly to qualify for the National cross country finals.

The U11s boys came very close to the medal podium with a 5th place finish in their 1500m with 183 points. The team packed in closely with Adam White leading the way in 41st place, Gavin Lee 43rd, Shaun Gilligan 44th, Liam Leen 55th, Gavin Kelly 61st and Sam O’Neill 72nd. Only for a fall to Liam Leen in the closing stages and the absence due to illness of Sean Cotter the team’s leading runner from the Connacht Championships, the team would have been very much in contention for medals.

In the U13 girls 2500m, Ailbhe Miskella had an outstanding run when stepping up an age and taking 60th place. Ailbhe led the team to 15th place, with Jennifer Hughes 92, Rachael Hughes 117, Sarah Woods 126 and Catherine Noonan 131. The U13 boys team acquitted themselves well with an 11th place finish in their 2500m. They were led home by Adam Heneghan 55th, Patrick Noonan 61st, Sean Cannon 66th, David Lee 81st and Sean Noonan 128th.

We were unable to field a full team in the U15 girls and in the end, Dearbhaile Walsh was our only participant. It wasn’t Dearbhaile’s day however and she finished back the field. But Dearbhaile has had an outstanding cross country season and is almost right back where she left off 2 years ago when she was double Connacht cross country champion in the U13 and 14 age groups. Ellen Treacy was the club’s final competitor in the girls events with an 89th place finish in the U17 girls 4000m. It was a great performance from Ellen with this her first season of cross country in a long number of years.

The U15 boys team came agonisingly close to the medals with a 4th place finish in their 3500m – 31 points off the medals. Oisin Lyons led the team home in 17th place followed closely by Liam Moran 24th, a resurgent James Cahalane in 50th, Conor Lee 62nd and Brian Loughnane 115th. The boys had the consolation of helping Galway take the bronze medals in the inter-county event. Having won this title as U13s, the lads placed 5th last year. Their 4th place performance this year augurs well for the future of the team.

Jamie Fallon was the club’s leading runner on the day with a 10th place finish in the U17 boys 5000m. Jamie suffered an unfortunate injury during the race which hindered his progress – a blow to him on the day as he has been in super form all season and was definitely on for a podium finish were it not for this mishap.

Paul Joyce and Neil Greaney also had strong performances in the U19 6000m with 18th and 21st place finishes – the first time ever the club has contested in this age group. Both men are remarkably talented. A slight logistical slipup left them with very little time to warmup for the race and to place so highly was an excellenet achievement.

All in all, it was a strong cross-country season for the club with very competitive teams across many age groups from our youngest to our oldest. We were unlucky with injuries in some age groups. Top performances this year in the various ages were:-

This compares favourably with last year:-

And we had many more teams make the trip to the National finals this year, so it was very good from a participation perspective.