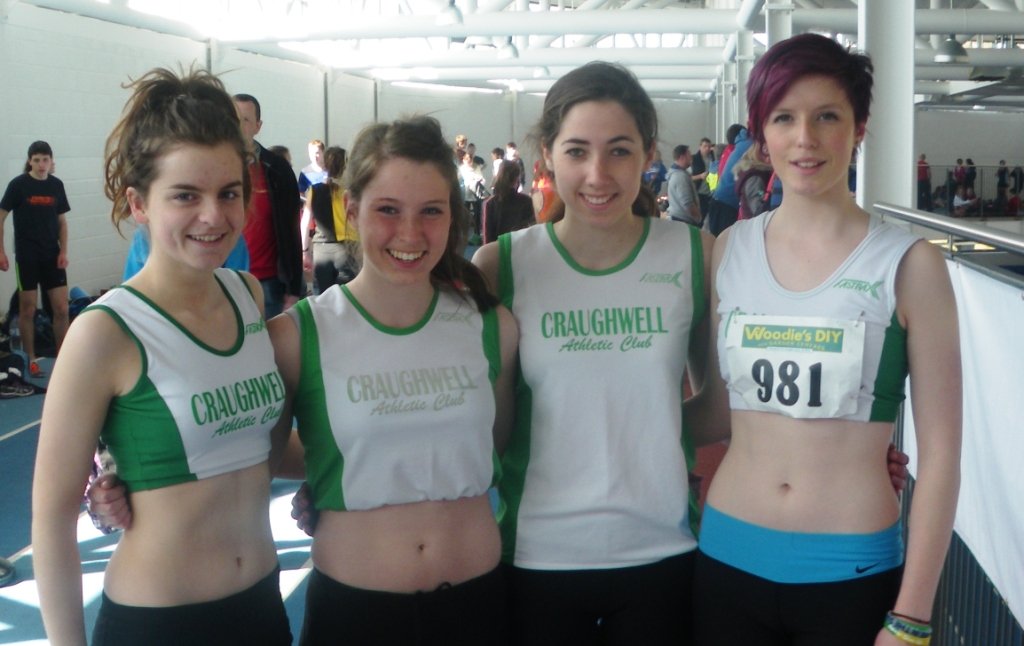 The final day of the National Juvenile Indoor Track & Field took place in Athlone on Saturday with the National finals of the indoor relays. The club came agonisingly close to the podium with a fantastic performance in both the U19 and U17 girls 4x200m races to take 4th place in both races – with the U17 girls having the consolation prize of setting a new club record of 1.49.73 in their heat.

The day kicked off with a strong performance from the U13 girls’ team to record a time of 58.69 to take 3rd place in their heat with the team of Alison Leahy, Roisin Hansbury, Tara Slattery and Siona Lawless. This was followed up by an excellent 1.58.84 from the U15 girls’ team in their heat with the team being Eimear Loughnane, Michelle Duggan, Aoife Greene and Dearbhaile Walshe.

The U17 girls put in a blistering performance in their 4x200m to take one of the automatic qualifying spots when placing 2nd in the heat in a time of 1.49.73 and in the process knocked 0.46 seconds off the club record which they set in last year’s U16 4x200m final. In the final an hour later, the girls were unlucky to be a fraction slower than their heat time in 1.50.04 in 4th place, just a half-metre behind Kilkenny City Harriers who recorded a time of 1.49.95.

The U19 girls suffered the same fate with a 4th place finish in their 4x200m final. The girls had the honour of being the first U19 team from the club to compete in the National indoor finals – a measure of the progress the club is making in these age groups. The team of Jessica Heneghan, Claire Ryder, Sineád Gaffney and Maireád McCan knocked over a second off their PB for the distance when recording a time of 1.50.52 to take 4th place in a final which saw City of Derry set a new national record in 1.45.18.

In the afternoon session, the U12 boys placed 4th in their heat in a time of 60.2s with Sean Cannon, Finbar McFadden, Cian Garman and Alex Evans. The U14 boys were 5th in their heat in 2.04.4 with Jerry Keary, Sean Delaney, Micheál McFadden and Cian Waters. The U16 girls just missed out on making the final of their 4x200m with a good time of 1.53.92 from Michelle Duggan, Leanne Freaney, Grainne McDaid and Tara McNally. 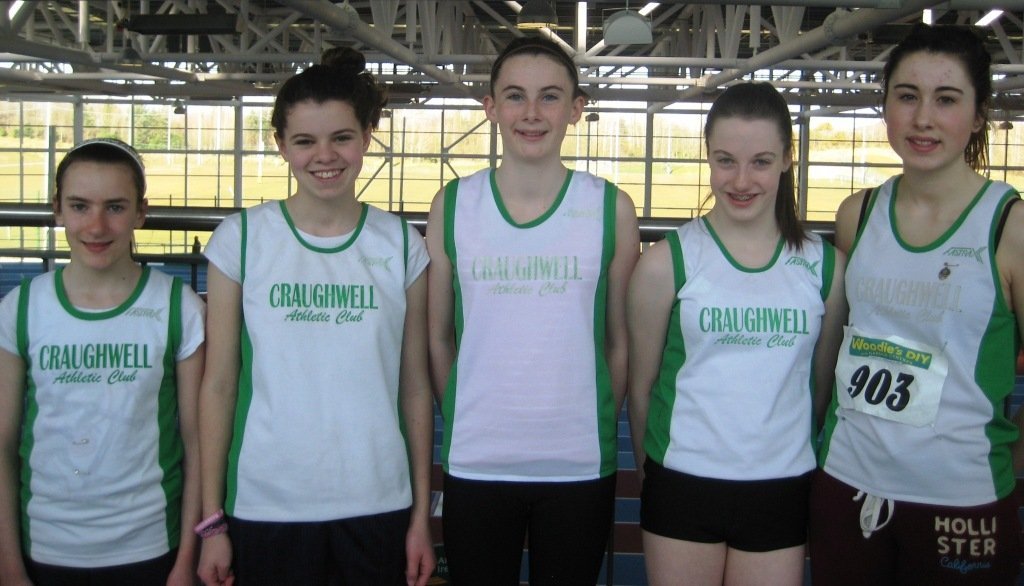 That wrapped up a great indoor season for the club and even though there were no relay medals this weekend, it still proved to be the best indoor season ever for the club with 12 individual medals over the first 2 days of competition, countless PBs and huge participation from all age groups within the club. Roll on the outdoor season!

A big well done also to our athletes in action in the prestigious National Road Relays in Raheny on Sunday. Conor Gillen, Neil Greaney and Jamie Fallon-Spellman stepped up to the senior ranks to partner Jason Broderick in the senior team while Mark Davis, Martin Corcoran and Gerry Ryan made up the masters team. Incredibly the masters team took a brilliant 3rd place in this highly regarded event. I will leave it to Mark to put pen to paper on the details but well done all on a fantastic performance.

For more details check out the AAI web site for track relays and road relays.