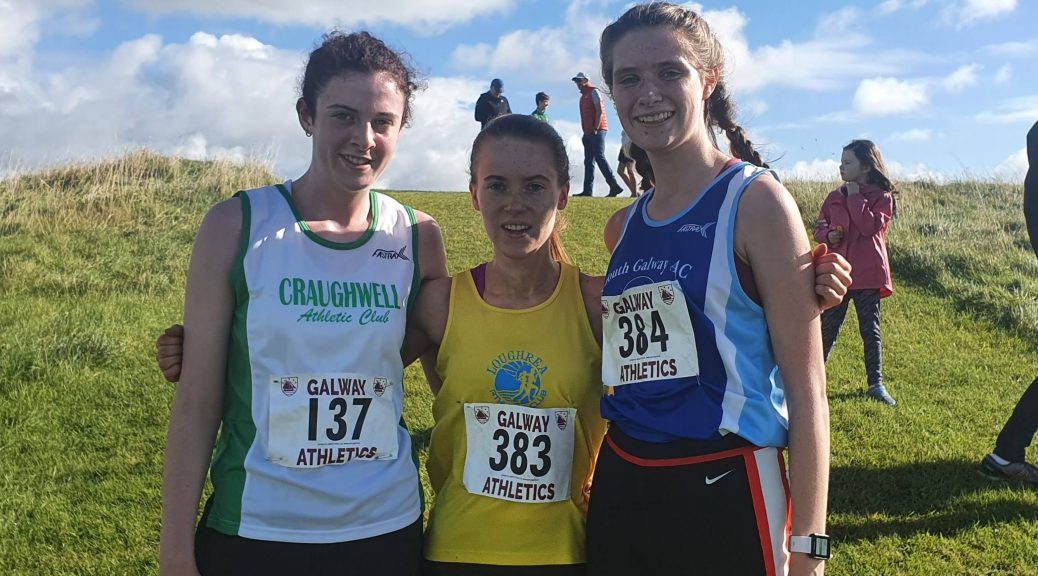 On Sunday the weather turned out exceptional in Loughrea for the Galway Senior and Even Age Cross Country.  William Fitzgerald has had a year to forget with injury but won his second Galway Cross Senior Title in a row  William settled in the pack for the first few kilometres and switched to another gear on the 4th before settling again to a comfortable win, always in control. Mark Davis was second man home for Craughwell in 9th followed by Mark Finnegan in 15th and Tom Tuohy making his cross country debut in 22nd.  The team did enough to win a Bronze medal just ahead of a strong Tuam AC outfit.  The women’s race was impressively won by Craughwell AC coach Jane Ann Meehan with a fine front running performance.

Mathys Bocquet stepped up in age to win the U18 Boys race in impressive fashion.  Mathys basically ran even splits through the entire race, grinding down his opponents to a convincing win.  Liam O’Connell ran well to finish in 5th followed by Killian Walsh in 6th who was recovering from a bad cold.

Holly O’Boyle had an outstanding run to win a fine Silver in the U18 girls race.  Holly had a few setbacks in her training this year but has been working very hard over the last few months and it really started to show again with this superb run.

Declan O’Connell had the most impressive win of the day.  The Irish international absolutely piled on the pressure and gapped the field by a massive amount over the 4000m route.  Luke O’Sullivan had a fantastic run, leading the chasing pack all the way until he just got pipped approaching the finishing chute.  Stephen Ruane finished in 5th.

Claudia Coyle really went to the well in a tough U14 girls race, finishing 4th.  Claudia was closely followed by Aisling Lavan in 11th in a fine run.

Stephen Joyce went off like Usain Bolt at the start of the U14 boys race.  Inevitably this resulted in a stitch but he bravely held on to finish in a fine 3rd, learning a valuable lesson in the process.  David Frazer had a breakthrough run in 6th followed by Oisín O’Donovan in 9th.

Sophie Meehan had a fantastic battle in the U12 girls race, running nip and tuck with her GCH opponent all the way before finally just getting pipped at the end.  The talented two were well clear of their nearest rivals on this occasion.   Laoise Corban (9th), Faye Whelan (22) and Grace Drysdale (27), Ava Dundoody (29), Jessica Madden (34) completed the Bronze-medal winning team.

Craughwell AC finished the day on a high with the mighty under-10s as Muireann Kelly won the girls race closely followed by Abbey Clesham in 3rd, Emma McGovern in 6th and Aoife O’Donnell in 14th, Naoise Quinn (19th) and Lilly Clesham (31) to seal a dominant win.   The Craughwell B team of Emily Burke, Orna Murray, Blanka Cygan, Roise Beatty, Orla O’Mahony and Olivia Gormon were 7th while the C team of Emily Dolan, Caoilfhionn Smyth, Croia Horan and Emma Meehan came 9th with fantastic performances all round.

The Boys U10 team matched their female counterparts with a superb one-two with Conor Mannion taking the win followed by his good friend Jack Hibbit.  Dean Fahy (9th) and Jack Melia (13th) and Jamie Whelan (45) rounded out a great team.