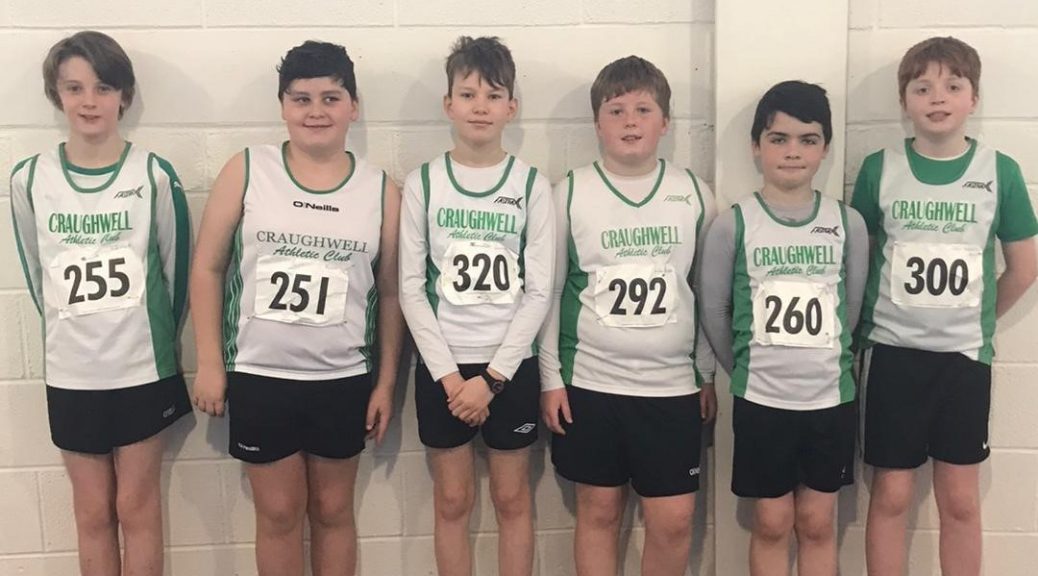 The busy weekend continued apace in Athlone on Saturday as Day 2 of the Galway Indoors took place – well done to all the volunteers, officials and especially the organisers – Craughwell AC’s own Aine Fahy and Siobhan Moorhead for doing the bulk of the planning and keeping things on track. Over the two days, Craughwell AC athletes set an incredible NINE championship best performances, which is a measure of the success on the track.

U12 Get the day going in style

Danny Cahill had a mighty throw to clear 6.79m in the Shot Put and win Silver. Eanna Tormey, Darragh O’Donnell and Jack O’Dwyer also had fine throws to lead a great crew of fantastic throwers.

The day kicked off with a smashing victory for the u12 relay team of James Niland, Darragh O Donnell, Lincoln King and Sean Colleran, narrowly edging out a class South Galway team by 1s.

In the girls 60m, Grace Drysdale and Adele Casserly both got identical times of 9.54 in separate heats to be top-4 or 5 – I’m not sure which order they were sorted in or if the results went to the thousandths!

The High Jump was a super competition in which Kian Armstrong won Gold. Alex Hughes and Lincoln King – joint Silver.

Seán Colleran won his heat of the 600m in style but was just edged out of the Gold by 1s by the lad in the next heat. Evan Lynskey, Danny Cahill, Alex Hughes, James Niland, Donal Coyle, Darragh Browne, Adam Jaworski, Ciaran McNena, Lincoln King and Darragh O’Donnell all had excellent runs too.

In the girls 600m Sophie Meehan was an outstanding 3rd, just outside the magical 2-minute barrier. Clara Geraghty also had a strong run.

U13 Alan leads the troops!

Alan Hallinan was definitely the standout athlete on the day – winning THREE GOLDS and setting TWO Championship best performances! had another exceptional day with a fine win in the Long Jump clearing 4.30, just ahead of Silver medalist Oisin O’Donovan. Daithi Lawless, Alan Warde and Ross Beatie also had great jumps.

Daithi Lawless was very unlucky to just miss out on a medal in the 60m with a fine 9.22 run. Calum McMahon was 5th with 9.30, while there were great runs also from Rhys Whelan, Cathal Desbonnet and Zach Keane. Aisling Lavan won Bronze in the long jump clearing 3.54 with Clodagh Browne, Maedhbh Wvjowska and Ciara Niland also clear excellent leaps.

Alan Hallinan scored the second of his individual Golds with a stunning new 600m Championship Best of 1.41.79, absolutely crushing the old record. Oisin O’Donovan was also inside the old CBP with 1.49.73, but finished 4th, as an indication of the high standard. Joshua Whirskey was next in 1.51.08 and Alan Warde, Rhys Whelan, Zach Keane also had superb runs.

Aisling Lavan ran 2.03 for 5th in the Girls 600m. Aisling was followed by Laoise Scully and Vanessa Madden in 2.05 and 2.06 respectively.

Alan Hallinan won the 60m Hurdles with a fantastic CPB of 10.20, an amazing 3rd Gold of the day for the talented man. Zach Keane was 2nd in his heat with 12.11.

One of the Highlights of the day was the superb Gold and Silver by the u12 Shot Putters with Max Madden. Max threw a sensational 7.84m on his first throw to win Gold and Cathal Desbonnet fired out a dramatic 7.60 last throw to join him on the podium! Killian Burke, Ross Beattie, Oisin Molloy and Sean Cloonan also had great performances.

U14s Medal in all their events!

[By U14 Coach Evan Morgan] Craughwell’s U14 athletes were in dominant form this weekend! The athletes ere in flying form achieving championship best performances and I would be surprised if any of our athletes failed to achieve a personal best performance in at least one event!

The day started with the 60mH. Rachel Warde the reigning National Champion in the hurdles turned in another brilliant performance winning the Gold medal and setting a new Championship Best Performance with a run of 9.65. Beth Glynn also ran a fantastic race and set a new PB winning the Bronze medal. What a way to start the day. Well done ladies.

Next up was the 4 x 200m Relay. First up were the girls. Craughwell entered two girls teams in the relay. The team of Lauren Morgan, Rachel Warde, Aeveen Kelly and Katie Leen dominated the race from start to finish. The girls won the Gold medal in a time of 1:53.36, and although not confirmed, I would be surprised if this wasn’t a new championship record. The team Saoirse O’Donnell, Sarah O’Gara, Beth Glynn and Claudia Coyle also ran a brilliant relay. The battled the team from GCH throughout the entire race brought home the Bronze medal. A fantastic race by a fantastic bunch of girls!!!

The boys relay team of Tom Malone, Darrah Simpson, Kai Watters and Ethan Stace were next up. Not wanting to be outdone by the girls, the boy proceeded to again run a dominate race winning the Gold medal with over 2 seconds to spare. Well done lads!!!

After a break, the athletes took to the inner track run the 60m Sprint. Lauren Morgan and Rachel Warde both took home the Gold medal!! How did this happen you ask? Well, it’s a very rare occurrence in athletics, but Lauren and Rachel running in different heats both ran the identical time of 8.462 (measured down to the thousandth of a second). Amazing race girls. Well done and congratulations. Katie Leen also set a new PB with a very fast 8.76 narrowly missing out on the Bronze!!

Next up were the boys. Tom Malone also set a new PB with a lighting quick time of 8.55 which earned him the Silver Medal. Kai Watters (8.66) and Dara Simpson (8.68) who finished 4th and 5th respective each ran super quick races each missed out on a medal by less than a tenth of a second!! You’ll get them next time lads!!

Moving over to the field events, the girls took to the High Jump. Lauren Morgan (another one of Craughwell’s reigning national champions) jumped to a Silver medal and Claudia Colye setting a new PB to finish in 5th place. Well done Claudia!! The talent of this age group is amazing. Anyone one of the top three girls have the ability to win the National title which always makes this competition interesting and fun to watch.

Over in the Long Jump pits, the boys were first up. Tom Malone leapt to a Bronze medal with Kai Waters following very close and finishing in 4th place. Over in the other Long Jump pit, the girls were jumping their way to glory as well. Lauren Morgan won her 5th consecutive Galway title winning Gold with a PB leap of 4.65m. Lauren was only 5cm off the Championship record of 4.70m. Oh so close, yet so far!! Beth Glynn also set a new PB with a jump of 3.88m missing out on a Bronze medal by just a few centimetres!!

Down at the far end of the arena, Ethan Stace took to the Shot Put. Ethan gave mighty heave and threw the shot to a Gold medal with a throw of 6.84m… Well done Ethan!!

The last race of the day for our U14s was the 800m. This is definitely not a distance for the faint of heart. It’s a killer of a race, yet two of Craughwell’s finest athletes took to the track for the 800m. First up was Claudia Coyle. Claudia led the race from the started and won her heat in dominating fashion. Her nearest rival finished a distant 16sec behind Claudia. Next up was Aeveen Kelly. Aeveen ran a superb tactical race against a very strong Isla Day of Clare River Harriers. It was an extremely tight race throughout Isla Day won out in the end with Aeveen finished less that a second behind her. In the end, Aeveen and Claudia both finished with new PBs and brought home the Silver and Bronze Medals. Fantastic running ladies.

Looking at our overall results from our extremely talented group of U14s we won medals in every event that we competed in!

The dynamic trio of Emma O’Donovan, Conor Penney and Sean Hoade were standout performers in the Under 15 age group, all claiming double-gold.

Sean Hoade set another Championship Best of 5.09 in the Long Jump, leading some Craughwell domination there as the top 4 finishers were all from Craughwell. Dean McNally had a great jump of 4.97 for Silver, followed by Joshua White 4.93 for Bronze in his last jump. Cian Brady (4.77) was 4th while Declan O’Connell (4.07) was 8th. Incredibly, the top 4 Craughwell lads were all under the old CPB of 4.70!

Declan O’Connell dominated the 800m with a fine 2.10.79. A huge Championship best Performance – however Declan was shooting for the sub-2:10 but tied up slightly on the home straight. Maybe next week!! Keelan Moorhead 4th in 2.25.

The u15 girls relay team of Emily Kinane, Keevagh Barry, Emma o Donavan and Lauren Kilduff also won with 1.52 in a tigh battle with a great GCH team.

Joshua White won the Shot Put in 7.88m, just ahead of teammate Donnacha Lawless in 7.55m.

U16 – Darragh gets the Double

Darragh Kelly was a clear winner in the high Jump with a clearance of 1.55m. He then went on to win Bronze in the 60mh a fine 10.58s. Isabel Shukat won Silver in the high-ump with a 1.40 clearance.

The bean counters (i.e. Iain) are starting to accumulate a picture of known Championship Best performances and in total, 29 new bests were set this year which shows the increasing standard! Craughwell AC set 12 of those which is a pretty good innings! The bests set this weekend by Craughwell Athletes are: