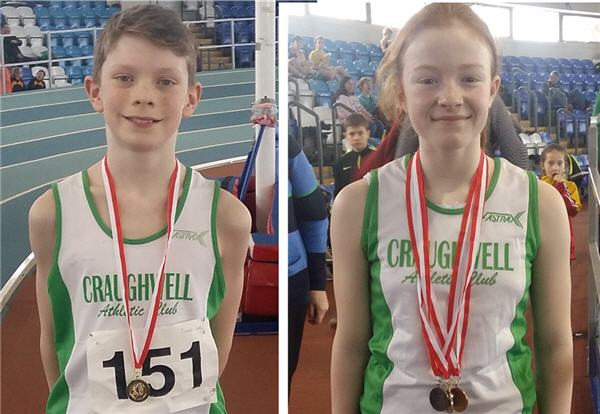 A busy busy weekend saw over 100 athletes from the club take part in the Connacht Indoor Track & Field Championships at the weekend in the magnificent surrounds of Athlone IT’s international indoor arena. The U12s and U13s were in action on Saturday, the subject of this article … and I will get another article out later tonight on the U14s and older who were in action on Sunday.

There were some truly remarkable performances over both days of the championships with the highlights of the U12/13s including triple medals for Ella Farrelly and Darragh Kelly in the U13 grade and the incredible long jumping by the U12 girls with 3 girls featuring in the top 4 from over 60 competitors in that event.

Ella Farrelly got her Saturday underway with a brilliant 8.91 in the 60m sprint to take the bronze medal and followed this up with a 4.20m on her final attempt in the long jump to take the silver medal, having to be conservative with that jump as she had broken her first 2 jumps. She capped a fine day with a brilliant time of 10.59 to take the Connacht title in the U13 60m hurdles.

It also was a day to remember for Darragh Kelly in the U13 Boys events. Darragh displayed ice-cool nerves to soar to a first-time clearance and PB of 1.51m and followed it up with an incredible first-time clearance of 1.53m to take the Connacht title in style. Later in the day, he added silver in the U13 60m hurdles with a brilliant 10.49 and on Sunday he added a bronze in the U13 race walk in a time of 6.13.11. 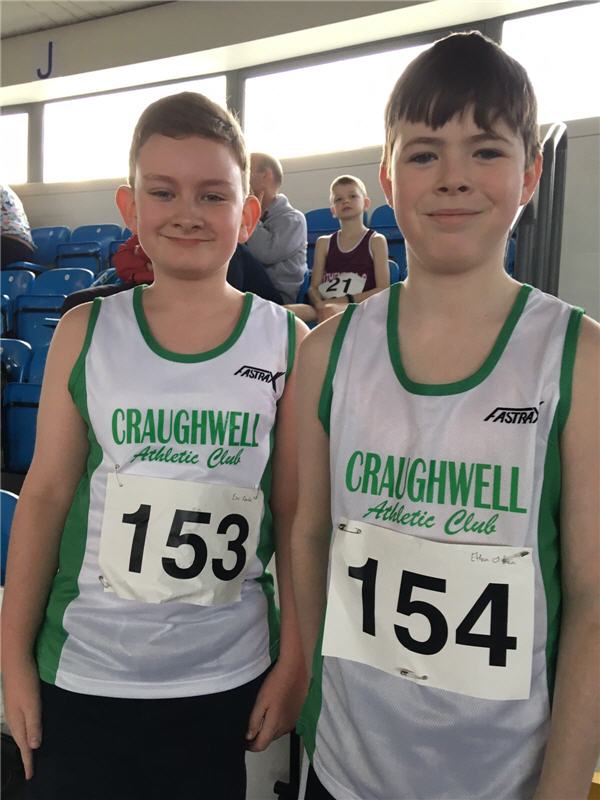 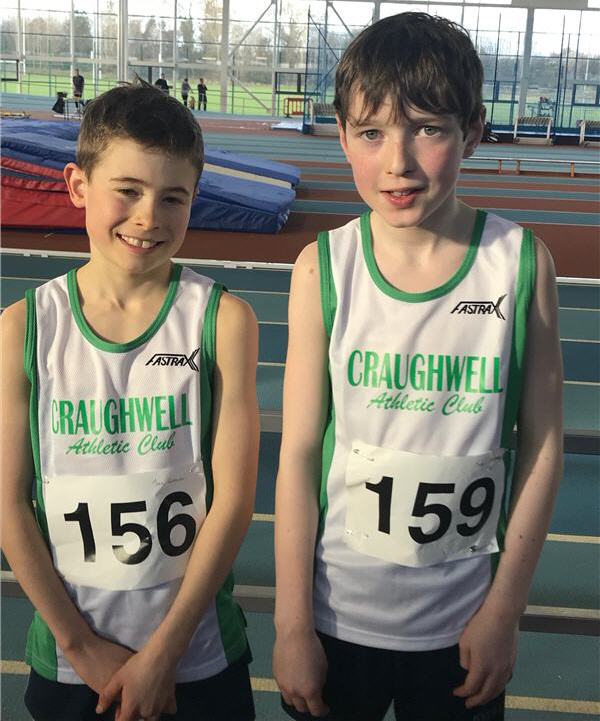 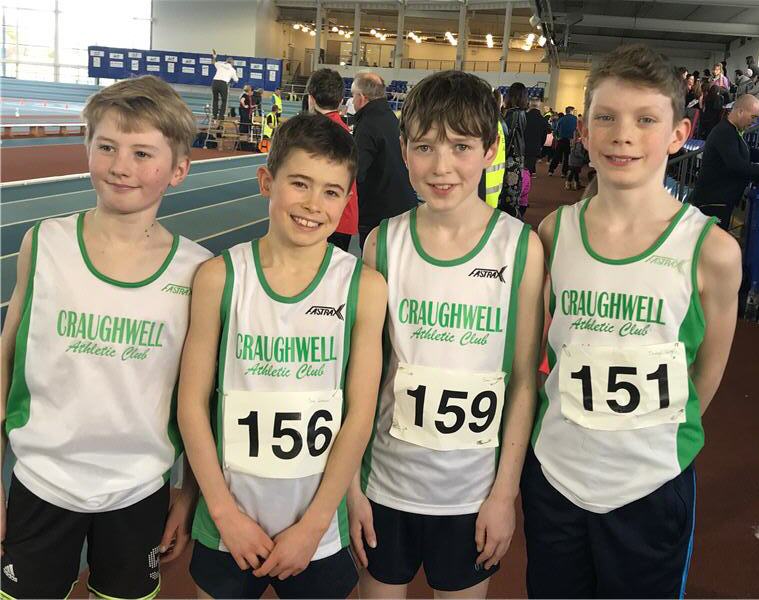 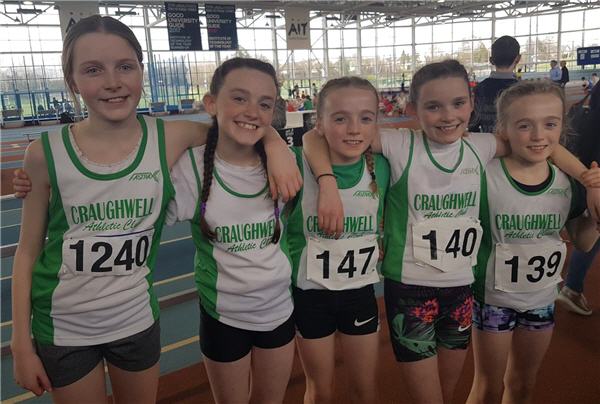 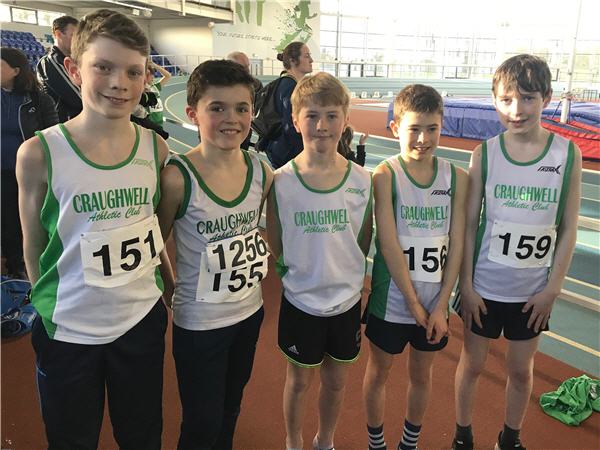 In the U12 grade, both girls and boys put in an outstanding series of performances across all of the events. The girls were particular impressive in the long jump with 3 of the top 4 out of over 60 competitors being from the club.

And a quick mention of 1 athlete in particular who put in absolutely splendid performances across all of her events ending up with 4th place in 3 of them and 5th in another – Keevagh Barry with 4th in the 60m sprint in a time of 9.36, 4th in the long jump with a leap of 3.70m, 5th in the 600m when winning her heat in 2.01.21 and part of our relay team that also placed 4th. Special mention also to Stephen Ruane who was racing to victory in his heat of the 600m before being badly impeded by a chasing athlete in the closing 20m of the race, being pushed sideways onto the infield which destroyed his race. The officials reviewed the situation and disqualified the impeding athlete but unfortunately the incident put Stephen out of contention for National qualification with his time of 2.00.36 placing him 10th overall, still a fine time from a super athlete with a great future ahead of him. 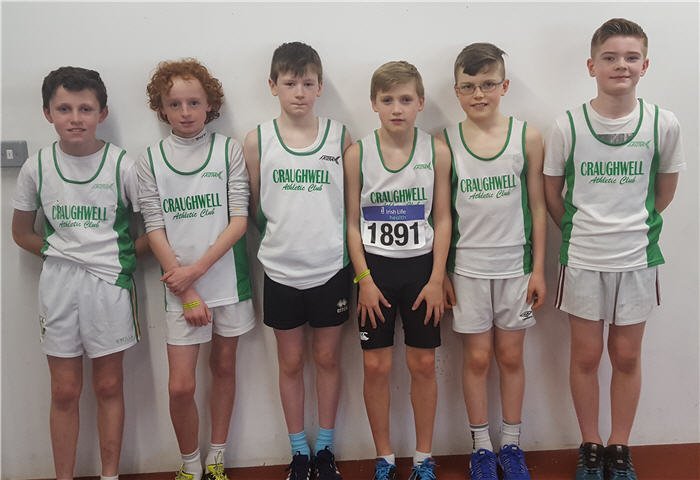 Emma O’Donovan had a splendid day with impeccable jumping in the U12 high jump to take the Connacht title with a string of clear jumps and a best of 1.20m. She followed it up almost immediately with a brilliant 3.80m to take the silver medal in the long jump and later won her heat in the 600m in an excellent 2.03.17, placing 8th overall in the 600m. It was a fantastic day also for Lauren Kilduff with bronze in the 60m hurdles in an excellent 11.64 and gold in the long jump with 3.84m – having only been persuaded to compete in the long jump a few days earlier! Lauren also recorded an impressive 9.55 to place 10th in the 60m sprint, followed closely by Claudia Fitzpatrick with a time of 9.67. It was a good day also for Chloe Keane in the high jump. Chloe only recently took up the event and jumped to a fine 1.10 to take the bronze medal, with Ciara O’Connor also clearing 1.10 and unlucky to miss out on bronze on countback. Ciara also ran a strong 600m later in the day with 2.14.77 as did Claudia Fitzpatrick with 2.10.35. 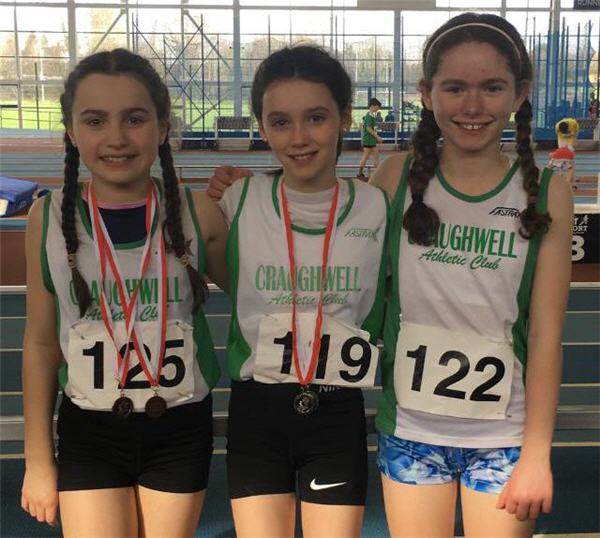 As well as the aforementioned athletes, the girls’ long jump also saw great jumping from Kiera Mernagh (3.27), Erin Dillon (3.25), Katelyn Walsh (3.20), Eabha Molloy (2.34) and Maria Gorman (2.13). Katelyn and her sister Lillian were unlucky to be struck down by injury and flu a few days before the event resulting in subdued performances from 2 wonderful athletes. The hurdles also saw some great performances including Chloe Keane (12.99), Caoilin Corban (13.79), Erin Dillon (14.13) and Aoibheann Dolan (15.32) as did the 60m sprint with Ciara O’Connor running 10.06, Eabha Molloy 10.84 and Maria Gorman 12.44. Erin Dillon was unlucky to exit the high jump early with a best of 1.05 while Kiera Mernagh and Aoibheann Dolan had decent throws in the shot with bests of 4.92 and 4.29. The girls also had strong runs in the 4x200m with the team of Keevagh Barry, Katelyn Walsh, Emma O’Donovan and Claudia Fitzpatrick placing 5th in a time of 2.12.55 and the team of Lauren Kilduff, Caoilin Corban, Ciara O’Connor, Erin Dillon placing 8th in a time of 2.16.95. 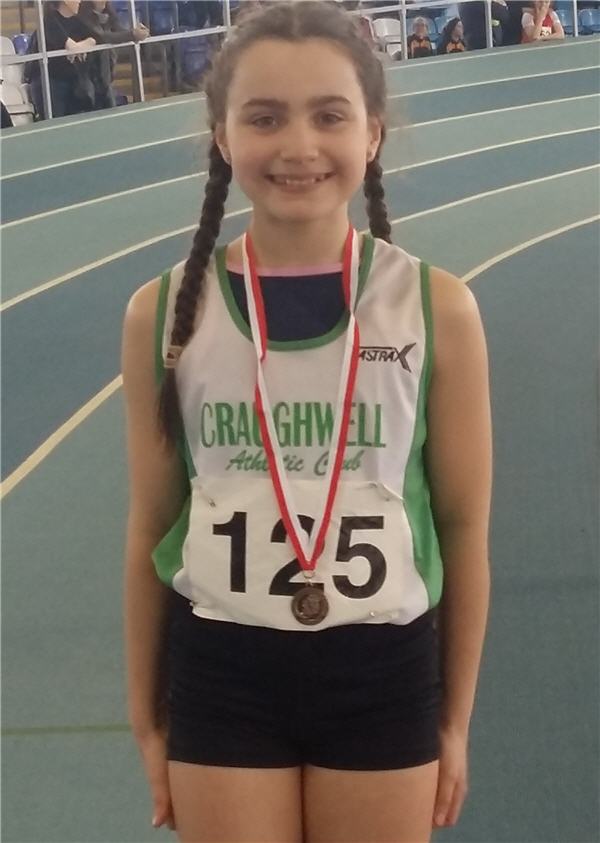 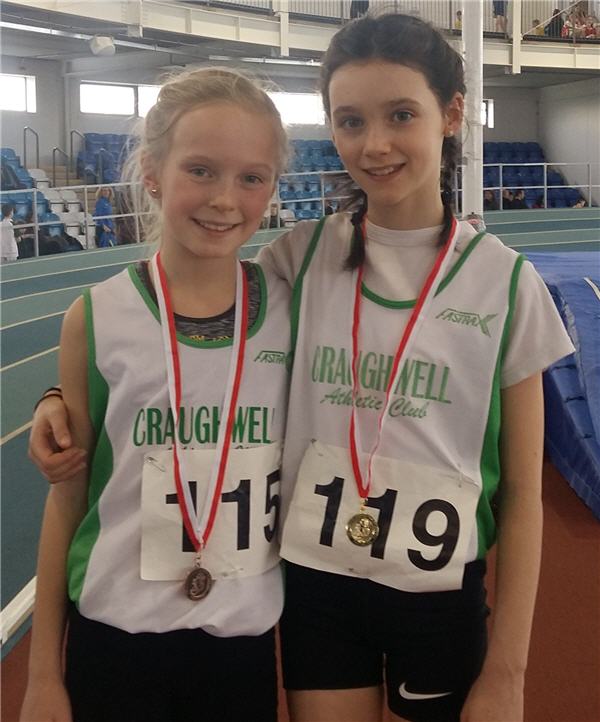 In the boys’ events, there were some further outstanding performances Conor Penney leading the way when taking the Connacht title in the high jump with a fine leap of 1.28m and Dean McNally taking bronze with 1.20m. Galway medallist Sean Hoade was unlucky to exit the competition at 1.15 while Josh White was very unlucky not to get off his mark at 1.10. Both Sean and Josh did very well in the shot with Sean taking 4th place with 6.72 and Josh 8th with 5.68, as well as Alex Ryan 9th with 5.37. Orrin Gilmore led a fine set of performances in the long jump when taking silver with 3.89m followed closely by Sean Hoade (3.70), Dean McNally (3.59), Dara Zimmerer (3.54), Conor Penney (3.54), Keelan Moorhead (3.36), Josh White (2.90) and Alex Ryan (2.63). 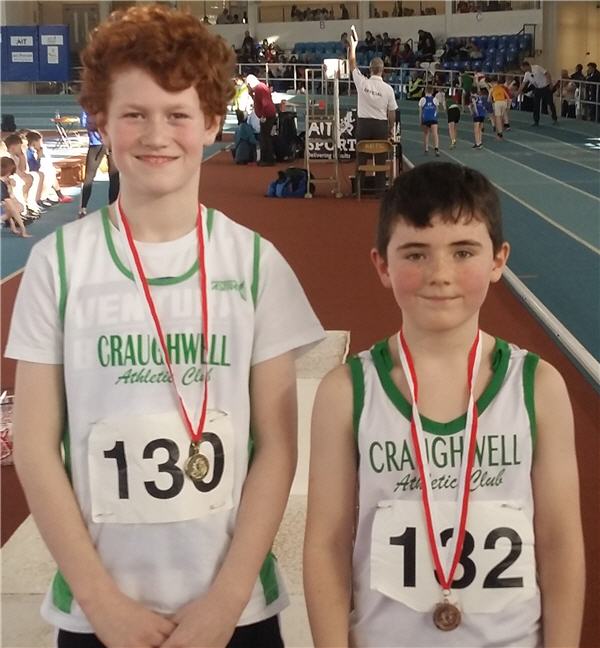 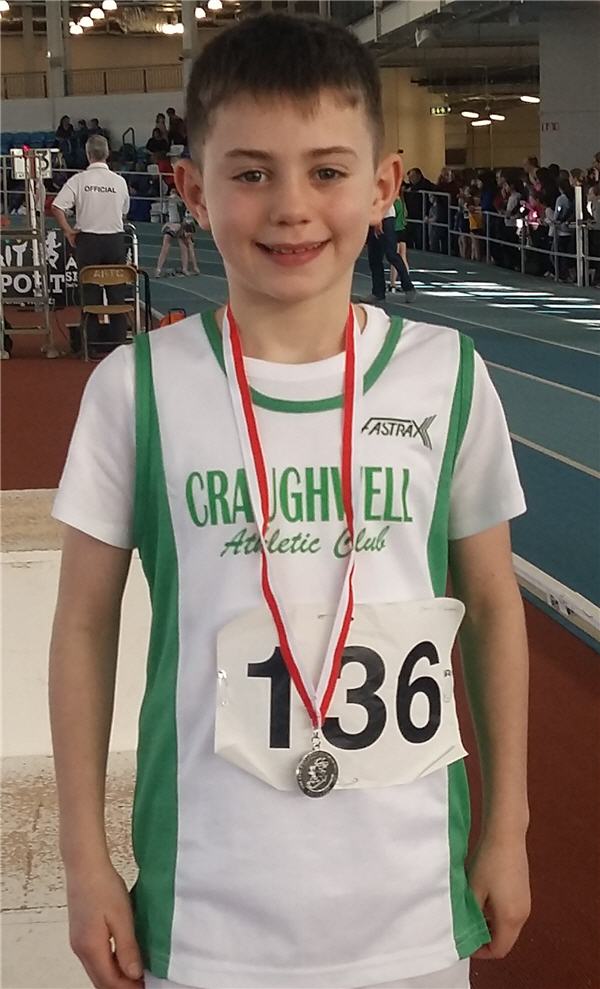 Cian Brady led the way in the sprints with a 12th place finish in the 60m in a time of 9.42 followed by Dean McNally (9.76), Stephen Ruane (9.81) and Conor Penney (9.89); while in the 60m hurdles Sean Hoade led the way with a 5th place finish in a time of 11.29 followed by Orrin Gilmore 11.99, Dara Zimmerer 12.17 and Alex Ryan 13.04. The 600m saw some amazing performances including from the aforementioned Stephen Ruane but also from Declan O’Connell with a super victory in his heat in a time of 1.57.61 to place 6th overall and an equally impressive performance from Keelan Moorhead to place 5th overall in a time of 1.55.59.

The boys raced to a super silver medal in the 4x200m in a time of 2.07.19 with Dara Zimmerer, Sean Hoade, Dean McNally, Cian Brady and sub Alex Ryan while our second team of Conor Penney, Keelan Moorhead, Orrin Gilmore and Stephen Ruane also had a fine run with 7th place in a time of 2.11.29.

All in all a wonderful day for the club with the top 4 in each event (except 600m and relays where it’s top 3) now going forward to the National finals in March/April. The finals are spread over a number of days and full details are on pages 19, 21 and 21 of the AAI juvenile competition booklet at https://www.athleticsireland.ie/juvenile/rules-regulations/.