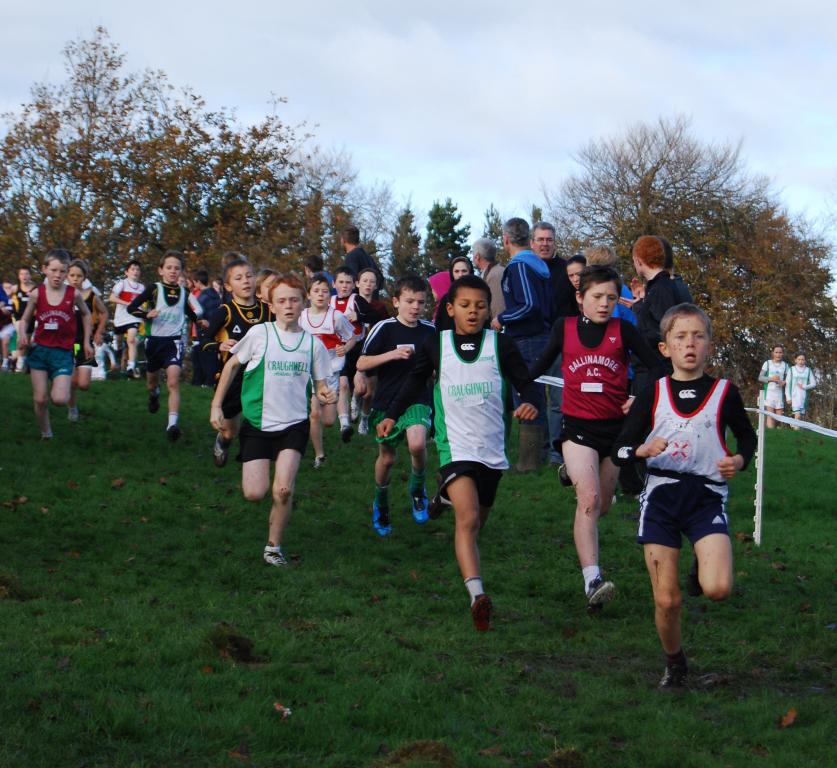 Another day of cross-country dawned in Tuam on Sunday where the Connacht uneven ages championships took place, with blue skies and crisp sunshine making for a pleasant change from the recent soakings in Sligo and Leitrim. Congratulations to Tuam AC on a well-organised event – the course was tough but the ground was firm and it was a real nice change from sinking up to your knees in a mucky field!

Craughwell AC had an incredible day at the event – featuring strongly in all six races where we had teams with all teams qualifying for the All-Irelands – although whether all make the long trip up to Coleraine has yet to be decided!

The performances today add to some fantastic performances a week earlier in the uneven ages in Ballinamore – check out http://www.craughwellac.com/index.php?option=com_content&task=view&id=522&Itemid=78 if you haven't already.

This is terrific progress for the club by any measure. Girls, take heart from the boys’ teams performances! Our girls’ teams took 4th in the U11s, 3rd in the U12s, 4th in the U13s, 5th in the U14s and could take 1st in the U15s and 16s if we could get full teams out. A small bit of luck would see us in the medals in all age groups – so next year girls, target is to outshine the boys!

The girls U11s were the first to take to the field in their 800m. Gutsy running by Dearbhaile Walsh saw her take 9th place overall and earn her place on the Connacht team for the All-Irelands and also scoring for the Galway team which won gold medals in today’s event. Dearbhaile was followed by a fantastic run by Emma Gaffney finishing in 22nd place and closely followed by 28 Erin Fitzpatrick, 29 Aisling Keady-Cummins, 31 Ciara O'Boyle and 46 Mary Dunphy. The team scored 88 points to take 4th place – only a miniscule 3 points behind Swinford with 85 pts and only 5 pts behind 2nd-placed Athenry.

The U11 boys were off next in their 800m. We knew we had a very strong team here but also knew that GCH had an incredibly strong team based on their Galway performances. So we hoped we were in with a shout of the medals. Isi Richards and Jim Crowley had a super start to the race, both well up amongst the leaders. The early pace took its toll on Jim and he faded a little in the closing stages. James Cahalane made strong progress throughout the race and finished in 7th place, followed closely by Isi in 7th, Brian Loughnane 14th, Ronan Nevin 15th, Liam Moran 19th, Dylan Finn 20th, Jim Crowley 22nd, Hugh Lane 30th, Sean Delaney 45th, Nathan Lynskey 48th and Peter Martin 49th. Particularly well done to Sean and Peter who were stepping up an age for experience and did very well to finish mid-table in the race of close to 90 athletes. The anxious wait later was well worth while when Craughwell were announced as 2nd team with a low score of 45 points! For James and Isi, their day was capped over by scoring for the victorious Galway team that defeated Mayo by a huge margin of 159 points!

Next into battle was the U13 girls team in the 1000m. Sinead Treacy led a strong team performance, taking 16th place overall and scoring on the Galway team that took the Connacht title ahead of Mayo by a single point. Sinead was followed home by strong running from Ellen Tracy 23rd, Grainne McDaid 26th, Siobhan Connolly 30th, Katie Donohue 35th and Ellen Fitzpatrick 42nd – with the team taking 4th place overall with 95 pts. 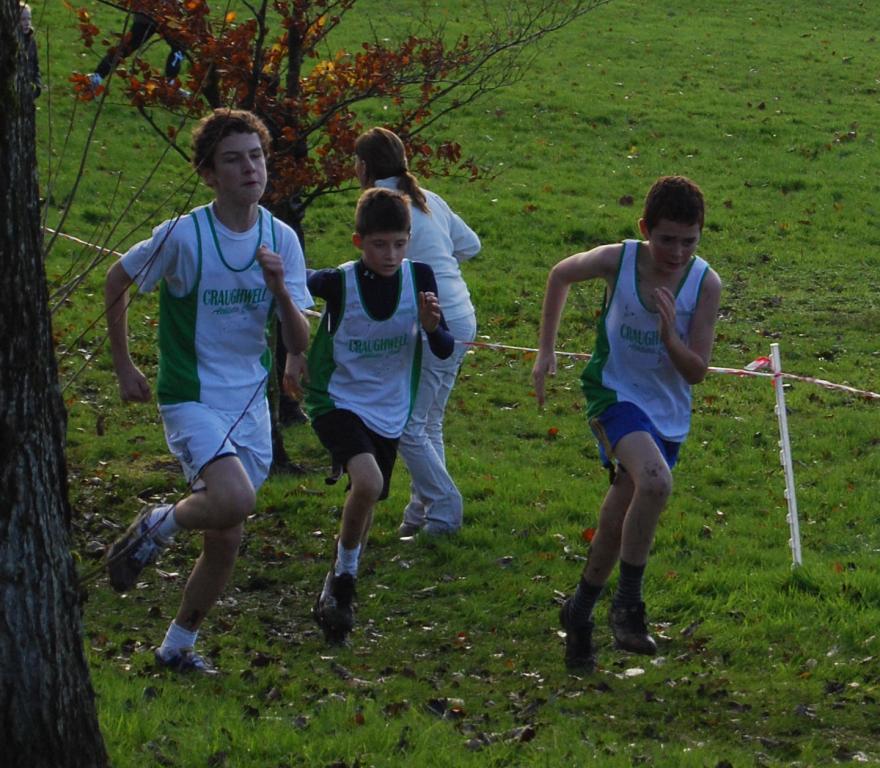 The U13 boys were next to take to the hills of Tuam in the 1200m where a very consistent performance saw a closely bunched finish from the team – 11 Gavin O'Toole, 13 Damien O'Boyle, 15 Oisin Doyle, 17 Brian Concannon, 24 Jamie Spelman, 33 Cillian McDaid. It was a fantastic run from Gavin in his first cross country race this year – plenty of hidden potential there! The tightly packed finish was sufficient to land the Connacht title with a low score of 56 pts, just ahead of Ballina who took silver medals in this age group in last year’s All-Irelands.

The U15 girls 1500m were next where unfortunately we didn’t have a club team. Muireann Maloney and Sinead Gaffney were running as part of a strong Galway team. Sinead was well placed on the first lap, with Muireann putting in a strong performance to overtake Sinead on the final lap and finish in 15th place to take the 6th scoring place on the victorious Galway team, just pipping Sinead who was the next Galway finisher in 21st place. 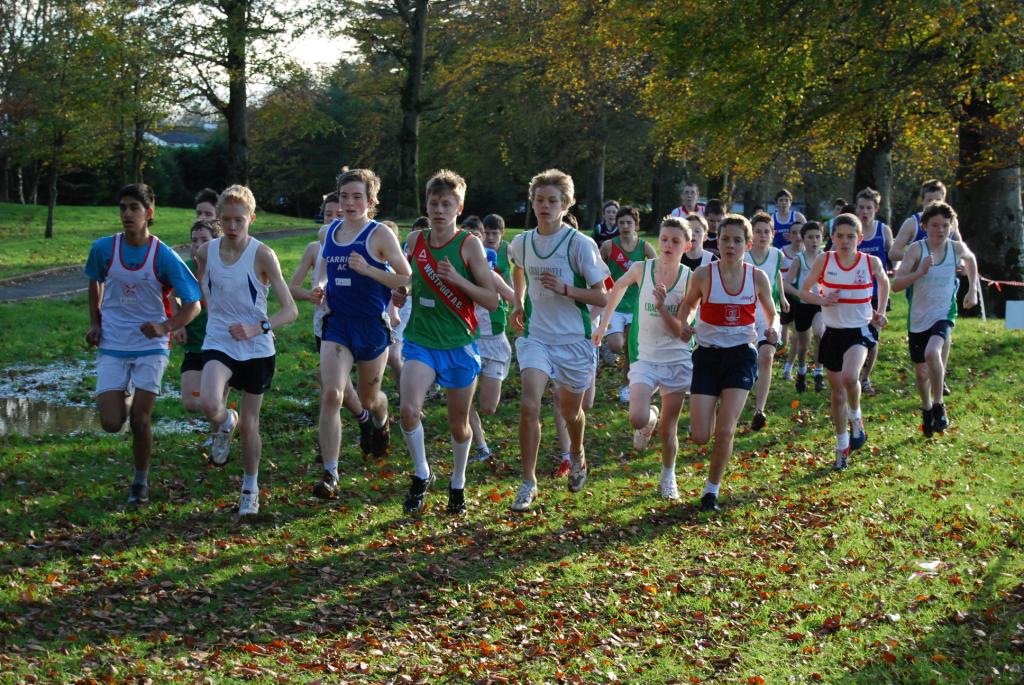 A strong Craughwell team contested the U15 boys 2000m. Finn Stoneman ran hard in the leading group as it wound its way around the first lap. The hard early pace took its toll a little on Finn who had ambitions of an individual top-3 place in this race and Finn slipped back a little. Conor Gillen was running well and moved slightly ahead of Finn as the race unfolded, finishing in an excellent 5th place with Finn recovering to take 8th place and set the tea m up for a strong performance – great experience for Finn and great determination to finish so strongly after running into difficulties earlier. Finn was followed closely by Nicholas Sheehan 11th, Paul Fitzpatrick 14th, Keelan Ryan 17th, Matthew Freaney 19th, Matthew Moran 24th and Cathal Reidy 29th. This was a super team performance and good enough to take silver medals with a score of 38 pts, only 5 behind Ballina who again had medalled in this age group at Nationals last year.

Final team in action were the U17 boys’ team in the 4000m. It’s difficult to highlight any team performance from all of the great performances today. But the U17 boys’ race is the one that gave me the most pride as it’s the first time that the club have fielded an U17 boys’ team in the Connacht cross country. Alan Byrne was making his debut for the club and Ross Haverty returned to cross country after a long absence of maybe 2 or 3 years. Peadar Harvey led the race out at a very strong pace – possibly a little too hard. As the race unfolded, Peadar found the going tough – been ill with the flu a week ago taking its toll – and slipped from the leading group back into 4th place. Meanwhile David Concannon was running an exceptional race behind Peadar and slowly closed the gap before moving ahead. 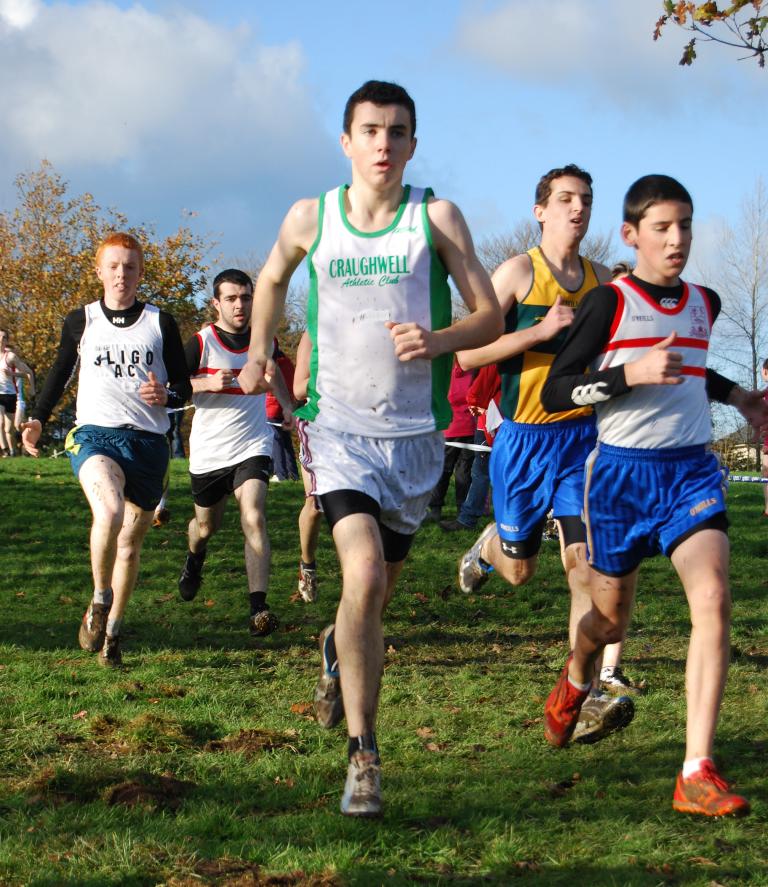 Alan was another athlete having an exceptional race, picking off runners slowly to eliminate all of the opposition between him and Peadar. Pádraic Tobin and Ross Haverty completed the team line-up. Ross found the going tough and eventually had to pull out about half-way around – but fair play to him for taking up the challenge off very limited training for it. Pádraic stuck to the hard graft in the race to hold on as the 4th scorer on the team – finishing in 17th place. Ahead of him, David was eating up the ground on the leaders but had to settle for 4th place as the finish line loomed. Peadar and Alan took excellent 5th and 6th places to complete the team scoring and yield a total of 32 pts – taking the Connacht title ahead of GCH by the margin of a solitary point. This victory and the performances of our other teams is a great advertisement for teamwork. Some athletes ran huge races, better than they expected. Others ran to form. Some might have been a little disappointed. But all gave it everything to score for the teams and making it possibly the club’s best ever day at a Connacht cross-country championship.

Full results of the day are available at

Photos to be added later today.