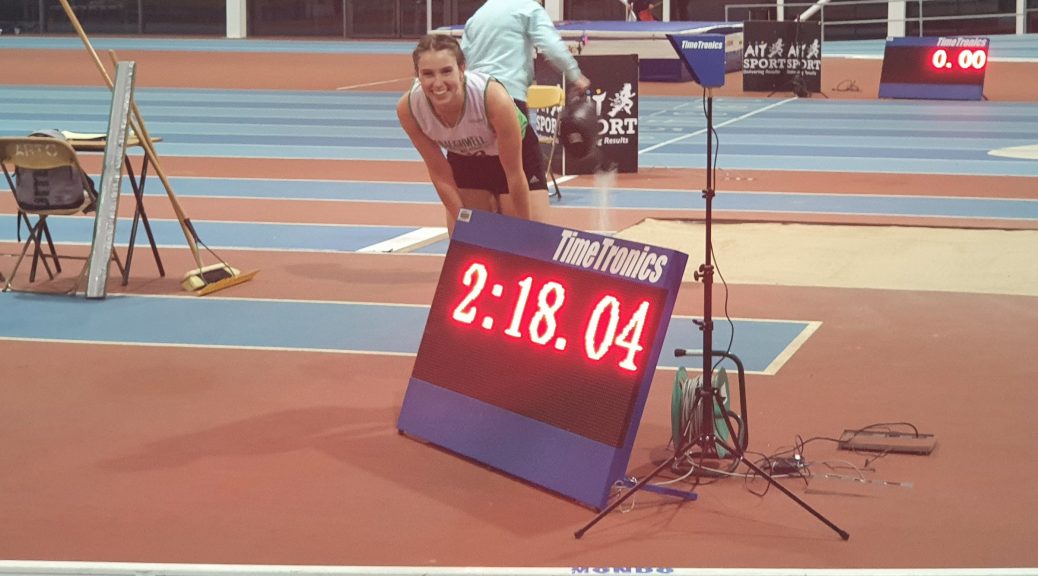 Hot off the back of the fantastic Sports Capital Grant announcements for Craughwell, Athenry and Tuam there was a fantastic atmosphere in TUS (aka AIT) Indoor arena on Friday night, particularly among the officials, many of who’s clubs saw support for their development plans. Connacht PRO Pierce O’Callaghan did a great job on the mike and new CPB performances were set. Holding the older ages separate to the Juvenile seems to have been a great move.

U17 Eva Kelleher won Bronze in the 60m with a time of 8.61s, a very impressive debut in the event for Eva.

Despite a heavy work and college load, Sinéad Gaffney is in a very comfortable place with her running at the moment and led from start to finish to smash her long-standing 800m indoor Club Record with a fine 2.18.02. A completely solo effort, Sinéad showed great focus to keep her rhythm solid and relaxed throughout and run a personal best and NEW CLUB INDOOR RECORD by over a full second!

The 1500m was set to be a good race with young guns Ross McGuinness, Oisín Davis, William Fitzgerald and Mathys Bocquet all competing, along with late entry the talented Eoin Molloy of Castlegar AC. I expected this race to be Oisín tailing William and seeking to stay in touch and perhaps outkick him, but it turned out the opposite. Oisín took on the race and ran a fairly even pace throughout with William just a step adrift looking for any sign of weakness. He was just on pace for the magic sub-4 at half way (2.08), but the pace dipped off a little in the next two circuits, but he rallied again to see Oisín finish in a new indoor PB and Club Record of 4.04.24, just the minimum 0.01s shaved off Damian O’Boyle’s 7 year old record from the national Seniors in 2015. (With Oisín and Seán in current form, I can’t see his new record lasting too long!). Oisín was followed swiftly by William Fitzgerald in a fantastic new personal best of 4.05.77, a great taste of speed for the distance specialist. William was followed by Ross McGuinness in 4.19.02, again an indoor personal best in his first outing of the season.

u17 Mathys was running for the first time ever indoors and set a new Championship Best Performance of 4.26.53. Mathys went out too quickly, and did brilliantly to hold on for that time!

The girls 1500m was a tactical affair and the slow initial pace meant that a large group were still in it for the final push. Due to the group size, Emily Miskella ran much of the race in the outside lane but still looked well placed to take the lead at the bell but when the kick came she didn’t quite have her usual zip – probably the long week of mocks had an effect. She finished second u19 in 5.19.45. It was definitely a race of two halves, the first half of the race was run at 5:35 pace and the second half at 4:50 pace! A solid run on a busy week!

Laura Cunningham won the Senior Women’s High-Jump with a leap of 1.50m, going every so close to 1.55m on her 3rd attempt. Laura also took silver in the Long Jump with 4.71m leap and showed good early season form to win the Triple Jump with 10.16m leap.

Jade Moorhead won the High Jump with clean first-time jumps over 1.50m and 1.55m, then soaring high over 1.60m on her first attempt and almost nailing the 1.65m on her second attempt.

Síofra Davis and Leonore Church were joint 3rd clearing 1.35m on this occasion which is a bit below par for them, but they are both working on a new run-up so when it comes together it will be fine hopefully!. Erin Kelly was unlucky not to medal as she also cleared 1.35m, but knocked the bar en-route.

Siofra Davis was looking forward to her Long Jump – she cleared 4.42m to seal 2nd, and Ella Lyons cleared 4.24m to win Bronze on her final jump.

Erin Kelly won the triple Jump with a very solid 9.42m final leap. In the u17 girls, Holly Shaughnessy won the High Jump with a 1.20m clearance. Eva Kelleher was unlucky on her Galway debut in the high jump to struggle with her mark and exit the competition at 1.20m – but will have learned a lot from the experience and will be back with a bang for the Connachts.

Justin Lane won the M35 Men’s High Jump with a clearance of 1.30. Justin also won the Pole Vault with a 2.00m clearance. Lukas Schukat was clear winner of the u19 High Jump with a 1.80 clearance, and he added an 11.57 win in the Triple Jump to this in his first time jumping from the 11m board.

Connacht Jumper of the year Evan Hallinan started his comeback from injury by winning the u18 High Jump with a 1.75m clearance, followed by a 6.26m win in the long Jump and a 13.07m win in the triple Jump – in the process breaking the club’s oldest senior record of 12.99m set by William Finnegan all the way back in 2007.

Sean Liston cleared 1.60m to win the u17 boys high-jump, equaling his PB in the process and exceptional jumping as Sean had missed a lot of training recently due to mock Junior Cert exams. Sean was a close 2nd in the long jump with a clearance of 4.76m.