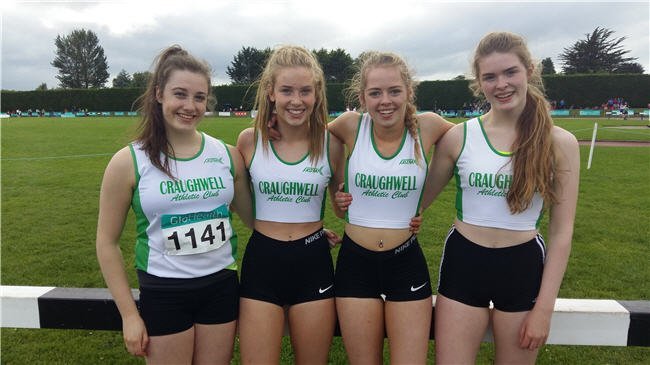 Massive congratulations to our U18 girls team who won the National title in style today at the National Relay Championships in Tullamore. The team of Michelle Duggan, Caoilin Milton, Aisling Keady and Laura Cunningham put in a powerful display of sprinting to take the National title on the line from a spirited GCH team in second place and Donore Harriers in third.

The team put in a superb performance in each leg of the race with Caoilin leading the team out with a storming start from lane 4 before handing off to Aisling at zone 1. Aisling tore down the straight in a blur of speed to hand off to Laura in zone 2 who accelerated around the bend at dizzying speed to hand off to Michelle in the final zone with the team in a strong second place at this stage. Michelle turbo-charged down the home straight chasing the leading runner who had a few metres advantage. As the finish loomed, the gap was narrowing, narrowing, narrowing, narrowing all the way to the line with Michelle just edging past in the final metres to anchor the team to victory by 7 hundreths of a second and a fine time of 51.49   … or a speed of about 28 km per hour!

The time is also a new club senior record, breaking the old record of 52.03 set by Jessica Heneghan, Sineád Gaffney, Orla Ryan and Katie O’Donoghue when taking the silver medal in the U19 Girls 4x100m in 2012.

Well done to the girls, the club are proud of you and its just reward for years of hard work and near misses, in particular the 4th place finish in the U18 4x200m at this year’s National Indoors.

Full report to follow tomorrow on all our performances including the fine silver medal won by Jade Moorhead in the U12 high jump.