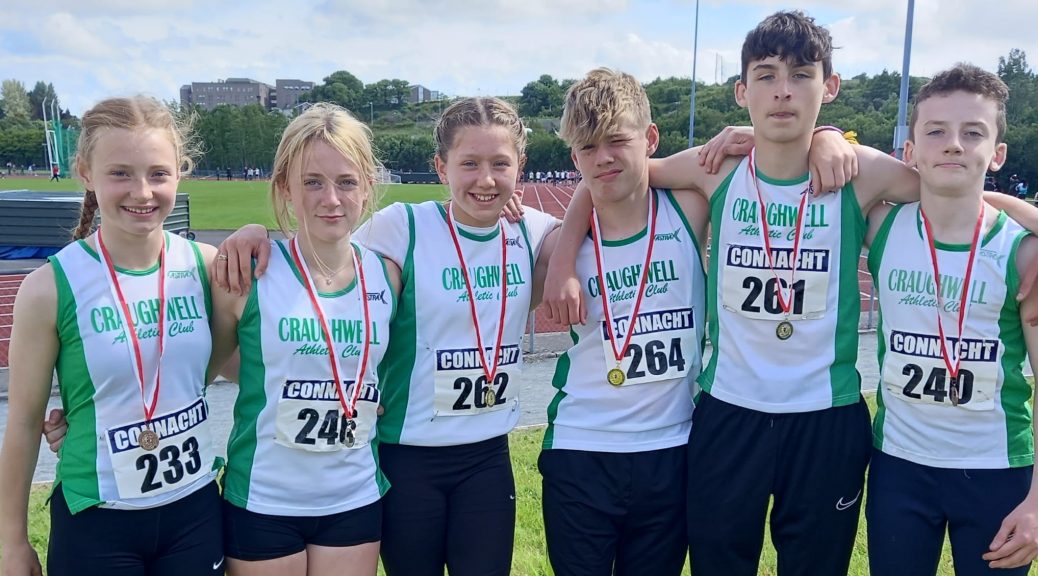 The finest u14 to u19 year old athletes in Connacht met in the beautiful surrounds of Sligo town on Saturday to contest the Connacht Championships.  In each event the top 4 qualified for a coveted all-ireland slot. Craughwell AC had another astounding day with 61 Medals – 23 Gold, 22 Silver and 16 Bronze.

U14 Rachel Warde was again the star of the show with an exception three individual Gold Medals and a team Gold medal in the relay.  Rachel came from behind to win her heat of the 80m in 10.74s and it was enough to take Gold overall.  Lauren Morgan (4th overall) and Beth Glynn also won their heats and Katie Leen was 2nd in hers.  Donnacha Lawless won Silver in the U15 boys 100m in 12.54 while Lauren Kilduff matched him in the u15 Girls with 13.07.  Chloe O’Reilly and Emily Kinane came 9th and 15th.  Evan Kelleher won Bronze in the u17 Girls 100m (13.12) and u18 Alison Corrigan qualified for national in 4th.

Keevagh Barry won Silver in u15 Girls and Donnacha Lawless won Bronze in the boys.  There were great performances also from Toyosi George, Joshua Whyte and Chloe O’Reilly.   Given the huge fields in these events, two clean sweeps is truly exceptional from the group and a credit to coaches Ronnie Warde, Brendan Penney, Evan Morgan and many assistants.

The sprinters combined later in the day to almost do a clean sweep of the medals with a win in the u14 Girls 4x100m (Katie Leen, Lauren Morgan, Beth Glynn and Rachel Warde), u14 Boys 4x100m (Alan Warde, Kai Watters, Darragh Simpson and Tom Malone) and u15 Boys 4x100m and a narrow Silver in the U15 Girls 4x100m (Keevagh Barry, Lauren Kilduff, Chloe O’Reily and Emma O Donovan).

The u15 boys team of Conor Penney 1st leg, Joshua white 2nd leg, Dean McNally 3rd leg and Donnacha Lawless 4th leg had what was described as the race of the day to just pip a strong GCH team for the Gold by hundredths of a second.

Remarkably, EVERY member of the u14 group has now qualified for the all-Irelands!

Craughwell is fast developing a reputation as a hurdles powerhouse and it was evident again on Saturday with a stunning win from Rachel Warde in 11.82s in the 75mh, followed by a double podium from Conor Penney with a Gold in the 80mh in 12.55 and Silver in the 250mh in a fine 36.75.  The talented Lauren Kilduff added to her Sprints Silver with a superb Gold in the 250mh in 38.29.  Darragh Kelly came 2nd in the 250mh with a fine 41.18.

In the jumps, Conor Penney had another amazing performance in the U15 Boys where he smashed the previous record of 1.70 held by GCH’s Matthieu Madden with an incredible first-time clearance of 1.84m. Conor entered the competition in the blustery conditions at 1.55m and had it won at that height, but proceeded to jump 1.62m, then 1.68m and then 1.72m all on first attempts to set a new Connacht record. Proceeding then to 1.76m, Conor clipped it twice on his first 2 attempts before adjusting his mark a little and soaring over it on his 3rd attempt and then going on with amazing first time clearances of 1.80, 1.82 and 1.84 before fatigue set in at 1.86. Conor had earlier raced the 250m hurdles – wiping out his legs in the process, clearly the best prep for Conor in the high jump with 3 outdoor PBs in it and a Connacht record!!!

Connacht 2021 Jumper of the Year, Evan Hallinan also had a remarkable day. Unable to train for the past 2 weeks due to a knee injury picked up when taking silver in the Irish Schools Senior Boys triple jump (which he followed up with gold in the high jump!), Evan was resting his knee since and took to the track for the first time since. On his very first attempt in the long jump, Evan smashes the club record and the Connacht U18 record for the long jump with a mighty leap of 6.47m and felt he had gone even further on his final effort but broke by 2cm.

Evan later attacked the Connacht U18 High Jump record, winning the Connacht title with a 1.90m leap and following it with 3 excellent attempts at 1.96m to try to break the Connacht record. The blustery conditions however put paid to that as the wind kept coming in gusts as the day went on, making it very difficult for high jumpers. Jade Moorhead had a similar experience in the U18 Girls High Jump where the record stood at 1.65m. Jade entered the competition at 1.55m, a height which no other athlete in the event cleared, but got off to a rocky start with 2 knocks – the wind being a big factor in that. But one of the best athletes to handle pressure jumps, Jade made a slight adjustment on her 3rd attempt to smoothly clear the bar and followed it up with a lovely 1.60m clearance. Going straight to 1.66m to attempt a new Connacht record, Jade had 3 fantastic efforts at the height – in particular her second attempt – with just an ever so slight brush of the bar with her heels to bring it down. So Jade had to settle for the Connacht title and wait another year for hopefully a crack at our own Cathriona Farrell’s 1.75m U19 record in 2023.

The triple jump was one of the first events of the day to take place and on his very first jump Joshua Whyte leaped a remarkable 10.93m to smash the Connacht U15 record of 9.85m set by our own club’s Daniel Callanan-Forde in 2014. Joshua didn’t improve on it on subsequent attempts but it was a super first effort and took the Connacht title. Dean McNally struggled a little with his mark on his first 2 attempts but got a solid jump in on his 3rd effort for a leap of 9.77m and the silver medal. Andrew Power and Evan Quinn had good jumps in the U18 Boys triple with Andrew taking the silver only 10cm from gold with a best of 10.86m and Evan the bronze just 7cm behind with a best of 10.79m. In the U18 Girls event, both Erin and Ella were a good bit behind the board on their attempts but still recorded good jumps with Erin taking the Connacht title with a leap of 8.83m and Ella taking silver with 8.24m.

The jumpers were back in action later in the long jump with Evan Quinn taking his second silver of the day with a leap of 5.70m and Andrew Power in 4th, only 7cm from bronze with a 4.91m leap. Jade Moorhead had a big long jump and new PB of 4.77m in what is a less familiar event for her but serious potential in that event, taking the silver medal only 12cm off gold. Leonore Church, Ella Lyons, Siofra Davis and Erin Kelly were a little off their bests in the same event placing from 5th to 8th with bests of 4.23, 4.20, 4.15 and 4.12.  Siofra and Leonore went on later to have a super high jump competition after a mixed year in the event so far – with both athletes leaping an impressive 1.45m and Siofra taking bronze on countback with Leonore 4th. Both exited the competition when attempting to equal their PBs of 1.50m and it was super to see them both back at this height and hopefully gaining new PBs before the year is out.

Kai Watters won the U14 Boys Long Jump with a leap of 4.82.  Lauren Morgan just missed out on the win in the u14 Girls Long Jump, clearing 4.52m.  Joshua Whyte won the u15 boys LJ with a clearance of 5.31 with Dean Mcnally winning Bronze.  Emma O’Donovan won Silver in the LJ with 4.80m.  Also in the long jump, Eva Kelleher was in super form taking the Connacht title with an exceptional leap and PB of 4.90m and later added yet another Connacht title in the high jump when equaling her PB of 1.50m and coming ever so close to getting 1.53m.

Back to the high jump, Emma O’Donovan had a super series of clearances over 1.35, 1.40 and 1.45m to take the U15 Girls Connacht title and had some great efforts at 1.48m but it proved a notch too high in the blustery conditions on this occasion. Likewise Darragh Kelly was in fine form in the U16 Boys high jump with first time clearances over 1.45, 1.55 and 1.60 followed by 3 excellent attempts at a new PB of 1.66m, coming up short on this occasion but it’s clear the PB is there any day soon.

Sean Liston took bronze in the U17 Boys High Jump with a 1.60m clearance, struggling with his mark a little on the Sligo track but more to come from a fine athlete. Isabel Schukat had a string of first-time clearances over 1.30, 1.35 and 1.40 to take the bronze medal in the U16 Girls high jump while Grace Mc Kermitt made her debut in the event with a nice 1.30m clearance to take bronze in the U17 Girls high jump – again more to come from a promising athlete who’s first time to compete was this championships.

And in the U18 javelin, Andrew Power was testing out his new spikes with a big throw of 38.11m to take the silver while Aoibhe Fahy took the silver in the U18 girl’s event with a fine 22.42m.

Aeveen Kelly was close behind Claudia in the 800m to take Bronze in 2:33.   Adara Salvo continued to develop in the 3000m with another personal best of 11:22 to claim Bronze in an exceptionally high standard field.

As the dust settles on another fantastic Connacht Championships, the unofficial medal table stands are per the below – fantastic to see Galway clubs so prevalent at the top of the table. It just blows my mind that Craughwell are in the top 5 given the population of the area, but to be on top again is just crazy and reflects the energy and positivity at the moment. It’s a great place to send your child to meet friends, have fun and get fast!!