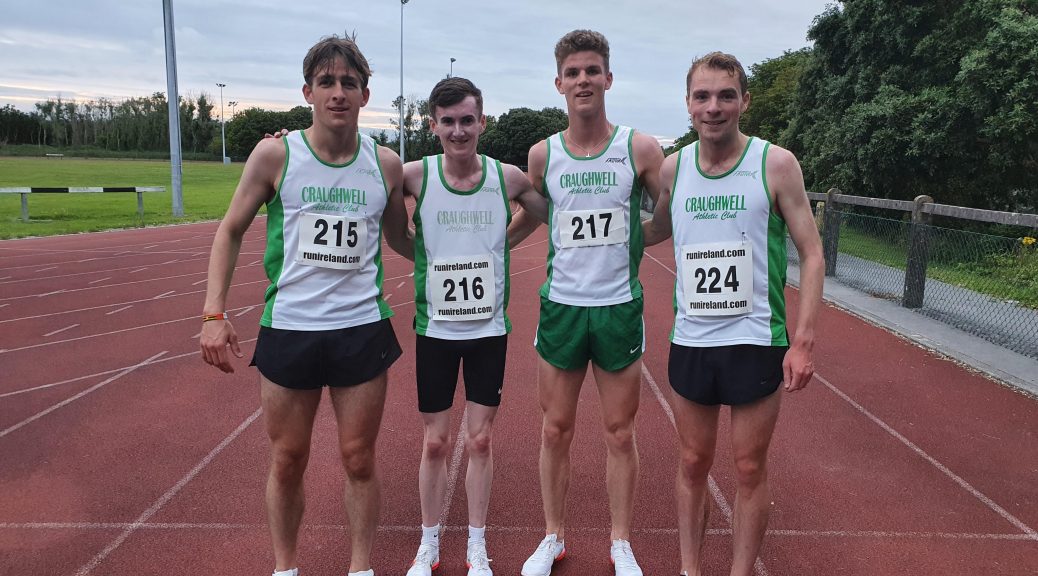 After the heat of recent weeks, conditions were cool and good for distance running on Thursday evening at Day 2 of the Galway Senior T&F. It was not exactly perfect conditions as there was a light breeze but uncharacteristically it was blowing at the competitors backs for the home straight rather than in their faces which is always nice – especially in the shorter distances.

Highlight performance of the day was definitely William Fitzgerald’s smashing of the long standing club 5000m record, but of note was the strength in depth and participations across all the disciplines!

Craughwell AC had 4 athletes in the Galway Men’s 5000m Championship and all scored significant personal bests, taking the first four positions in the large field.

William and club Junior record holder Jamie Fallon had planned to work together to attack the 15 and that’s how it panned out, though in truth Jamie did much of the pacing and William sat patiently in behind. Jamie is an excellent judge of pace and he hit the 72s laps like clockwork. We have been focusing on finishing speed of late and William has growing confidence in his ability to close. With two laps remaining he took the lead and accelerated steadily towards the finish, closing with a sub-70.

William had been threatening the great Gerry Ryan’s long-lived club 5000m record for some time, having come within a second of it in the national u23s in Santry. However he smashed it by 6 seconds on Thursday, and the magical 15-minute barrier in the process, running a fantastic 14 minutes 56.33 seconds. (Of course, the legend Gerry had faster times prior to joining us – including a sub-14 clocking and a truly world class 14.01 as a Junior. William – this can be the next target!!).

One for the statisticians – when was the last time 15 minutes was broken in the Galway T&F..?

Jamie couldn’t quite keep with the injection of pace but finished close behind, just shy of breaking 15 this time but 15.03 is a magical personal best for the first time in many years which is some feeling and well deserved!.

Behind the lads, a similar race played out between Kyle Moorhead and Patrick Noonan as both set out to break the magical 16 minute barrier for the first time. They traded positions, working well together to hit 3000m in 9:35 and actually increased their pace over the last two KM. Paddy is strong and about 4000m a slight gap started to develop but Kyle showed great character to keep his head up and drive on. Paddy finished in a superb 15:38.79 (PB) for Senior Bronze, with Kyle close behind as 1st Junior in 15.46.04.

Sinead Gaffney made it a Craughwell double as she closed out a fast Women’s 800m with her trademark kick to finish in 2:19.33, her third time under the 2:20 this season. Emily Miskella continues to improve and scored a fine season’s best for Silver in the Junior Women’s 800m with a strong 2.26.56 clocking in a race which went out at a ferocious pace by GCH’s Ella O’Connor.

The 200m women’s race saw a strong performance from Sinead Treacy to take the Galway Senior title in a blistering 25.23 to add to her 100m title from last week, with Arlene Earls taking bronze in 27.28 and Lorraine Delaney placing 4th in a PB of 27.85, lactic taking over in the final 20 metres.

There was a CRACKING battle in the Masters 200m where David Mulligan just pipped Cormac Kearney on the line (video below).

It was a good day too for Laura Cunningham with double-gold in the Senior Women’s high jump and triple jump with seasons bests of 1.50m and 10.39m to add to her long jump title from last week making it a hat-trick of Galway Senior titles for Laura in the jumps events. Sarah Finnegan leaped to a season’s best of 9.57m to take the silver medal in the Senior Women’s triple jump.

Saoirse Moore claimed the silver in the Junior Women’s High Jump with a best of 1.40m with Erin Kelly taking bronze with 1.35m. Erin recorded an impressive 4 PBs during the triple jump, finishing off with an exceptional leap of 9.70m to take the Galway Junior Women’s title.

In the men’s high jump, Lukas Schukat was jumping from a shortened 6-step approach as he had only recently recovered from an injury and put in a very impressive series of jumps to take the Galway Junior Men’s title with a best of 1.75m – soaring very high over that mark on his 3 attempts but clipping it on the way down each time. The foray of our master’s sprinters into the jumps continued with Cormac Kearney taking the Galway title in the M35 High Jump with a jump of 1.40m, pipping the legendary Justin Lane for the gold on countback and Brian Malone taking the bronze medal with a leap of 1.30m on his debut in the event.

Starting to throw a bit too!!

Super-coach Michelle Drysdale is bringing a love of the throwing arts to the club of late and she impressed today in her return to the Discus which saw an impressive 20.21 to take the Gold in the M35. With the exploits of global superstars like Ryan Crouser and local rising star Liam Shaw, there is a contagious buzz in the world of throwing at the moment and Michelle is leading the charge in the village! There’s more to life than running!

Superb results, and what makes them more impressive is that a huge contingent of the athletes went on an absolutely monster 6 hour hike and swim just a few days ago – a great day out, but the legs were definitely feeling it!!