While we still have 1 more day to go of National finals, I am way behind updating the website so here goes with the 4 days of National finals so far. It’s being a busy string of weekends with a trek to Tullamore each weekend of the last 3 weekends for the National finals. They kicked off on the last weekend of June with the finals of the U9, 10 and 11 age groups. A large cohort of Craughwell AC juveniles travelled to Tullamore for the occasion where the club enjoyed some fantastic success in the paired events and relays.

The U9 boys pairing of Darragh Kelly and Steven Jennings took a magnificent silver in the long jump with leaps of 3.13m and 3.21m. In the U10s, Evan Moran combined with Eddie Silke to take silver in the 500m with Evan running 1:34.95 and Eddie 1:38.73. Evan featured on the podium again with bronze in the long jump with 3.37m, where he paired with Conor Gilligan who leaped a massive 3.60m. The boys were matched by the U10 girls who took bronze in their long jump with Chloe Hallinan leaping 3.48m and Siobhan Carr 3.51m. The U9 pairing of Jessica Shannon and Tara Keane were unlucky to place 4th in the turbo javelin with Jessica throwing 8.90m and Tara Keane 12.14m. Luke Flynn was unlucky in the U11 long jump where he was jumping huge distances but recorded marginal breaks on each jump while partner Evan Hallinan recorded a big leap of 3.82m. 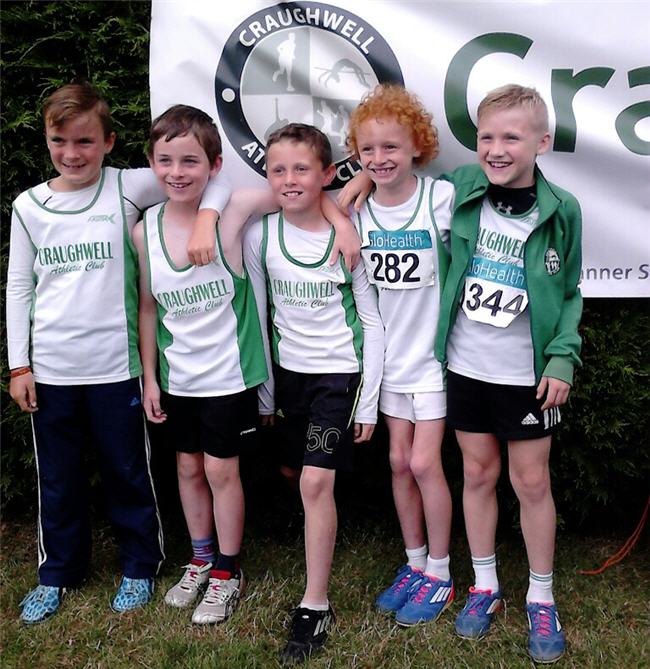 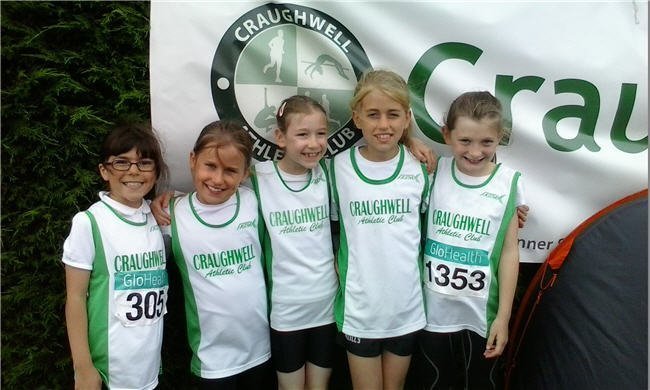 Craughwell U10 4x100m Teams at the National Championships in Tullamore 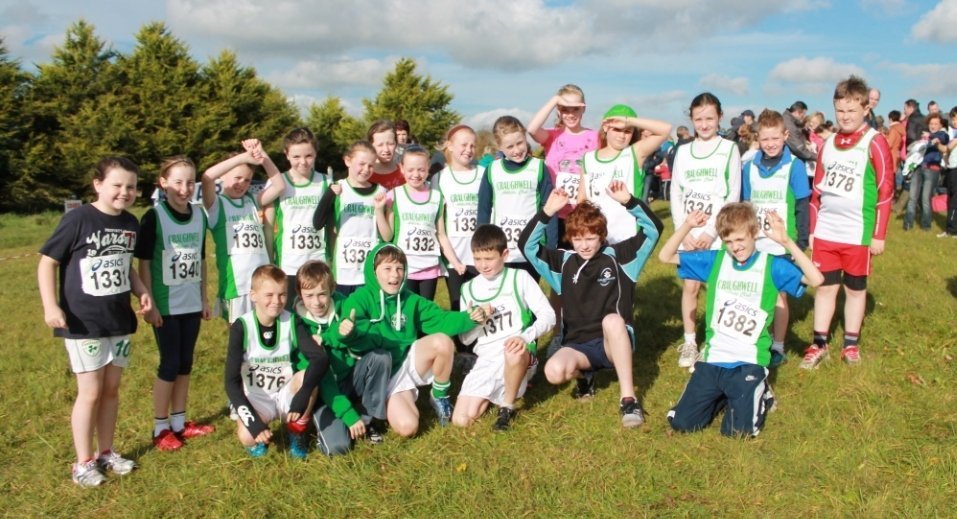 Craughwell U10=1 4x100m Teams at the National Championships in Tullamore

In the relays there were some other splendid performances with the highlight being bronze medals for the U10 girls’ team of Aoibhe Donnellan, Siobhan Carr, Grace Lynch, Chloe Hallinan, Isabella Boland in a time of 1.05.55. Both the U9 and U11 girls teams placed 9th fastest in their heats, just missing out on the final with the U11s running 1.03.98 (Aoibhe Carr, Jade Moorhead, Erin Kelly, Jade Whelton) and the U9s running 1.11.56 (Ella Farrelly, Mollie Gilligan, Sophie McIlrath, Beth Crowe).

There were exceptional runs also from the boys teams with the U9s placing 4th in the final in a time of 1.06.48 (Rian Comer, Sean Lavin, Cian Connaughton, Steven Jennings, Darragh Kelly) – a feat also matched by the U10 boys where they placed 4th in a time of 1.03.92 (Conor Gilligan, Eddie Silke, Cormac McFadden, Evan Moran, Cillian Horan), The U11 boys were also in fine form with a 5th place finish in the final in a time of 1.00.80 (Ryan McDonnell, Evan Hallinan, Daniel Galvin, Cian Lavan, Fiachra Bond).

At the same venue, Freya Bohan was in action in the U14 Pentathlon where she competed very strongly in her first outing in this event taking 5th place overall in a high quality competition and recording bests of 13.11s in the 75m hurdles, 4.49m long jump, 1.36m high jump, 8.47m shot putt and 2.38.88 800m for an impressive points total of 2463. 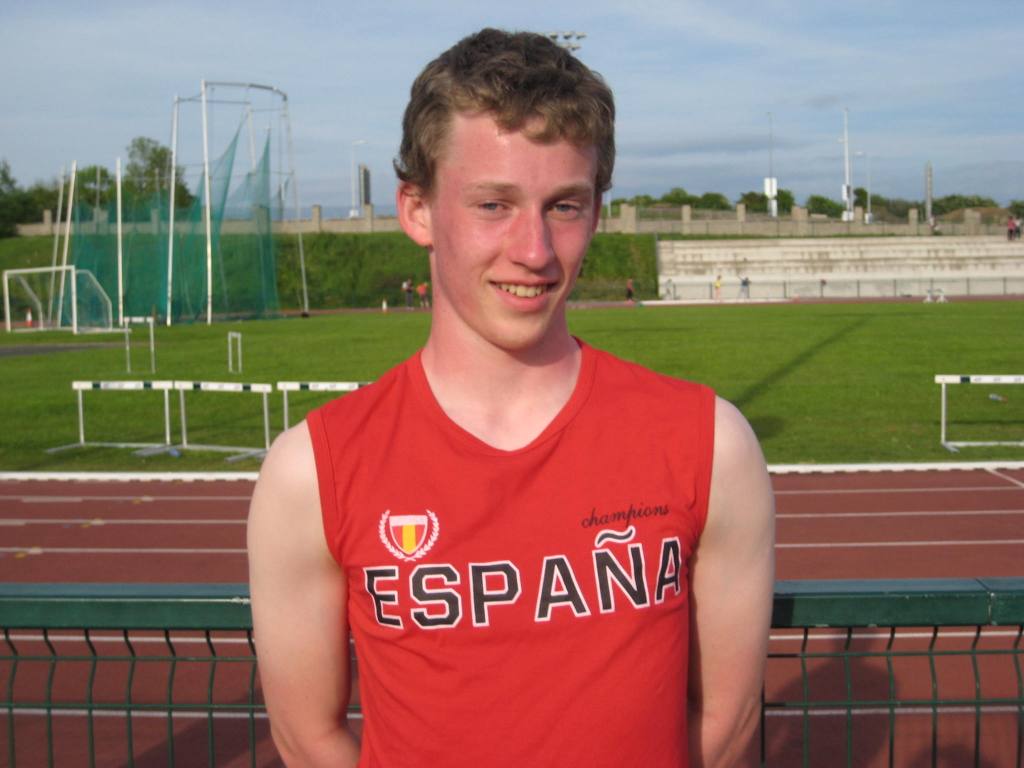 Fast forward to a week later when the first day of the U12-19 National finals took place followed by the National Junior and U23 Championships. Leading the way in the Junior Championships, Conor Duggan had an outstanding run to take the silver in a PB of 22.04. Also in the medals, Damian O’Boyle took the National title in the Junior Men’s 3000m Steeplechase n a time of 10:39.40 while Sineád Treacy finished 4th in the Junior Women’s 200m in a time of 25.33. Peadar Harvey and Gavin Cooney placed 6th and 7th in the U23 Men’s 800m in times of 2.06.17 and 2.07.58.

A day earlier, the club enjoyed remarkable success at the national Juvenile Championships with 5 medals and numerous top-8 placings. The jumps yielded most of the success with Sineád Treacy taking the U19 Girls Long Jump title with a huge leap of 5.44m, Daniel Callanan-Forde taking silver in the U16 Long Jump with 5.87m, Matthew McKernan taking bronze in the U18 Boys Long Jump with 5.98m and Jerry Keary claiming the bronze in the U16 High Jump with 1.75m. Dearbhaile Walshe provided another major highlight on the day with a silver medal in the U17 grade in her first time competing in the National Steeplechase in an excellent time of 8:09.72.

The action continued apace on the following weekend with the U12-19s in action again in Tullamore on the final 2 days of individual competition. The club enjoyed further success with 6 more medals coming our way along with 4 fourth places. This brings the club’s haul from the National U12-19 Championships to 11 medals, one of its best performances ever which ranks it as one of the top clubs in the country.

Sineád Treacy clinched double silver in the U19 Girls sprints with times of 12.36 in the 100m and 25.39 in the 200m. This caps a remarkable year for Sineád in her final year as a juvenile athlete where she won 3 gold and 3 silver in the National indoor and outdoor championships in the long jump and sprints. 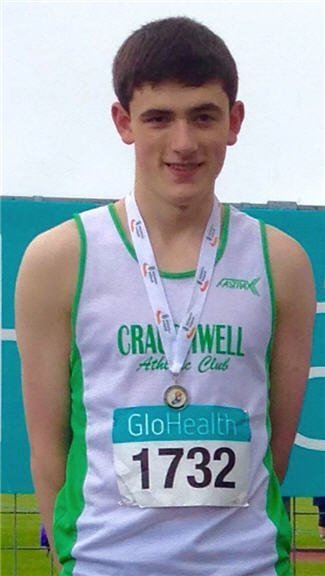 Damien O’Boyle was unlucky to just miss out on the podium with 4th place in a tactical U19 1500m with a time of 4.25.17, as was Tara McNally in the U18 Girls 400m hurdles when placing 4th with 1.08.45. Matthew McKernan added to his long jump bronze from last weekend with a fine 12.35m leap to take the silver in the U18 triple jump and set a new club junior record in the process. Daniel Callanan-Forde achieved a similar feat when adding to his long jump silver from a week ago with bronze in the U16 triple jump with a leap of 11.80m. Laura Cunningham had a fantastic series of jumps in the U16 Girls triple jump to take 4th place with a best of 9.64m, only 9cm from the medals despite picking up an injury on her second jump.

Aisling Keady was another to just miss out on the podium with a best of 1.45m to place 4th in the U17 Girls high jump. Sean Connaughton had a fine series of jumps in the U14 Boys high jump with his first-time clearance of 1.50m just enough to take the bronze medal. In the U12 turbo javelin, Oisin Keane threw exceptionally well to take the silver medal, improving his throw on each round of the competition up to an impressive 28.62m on the 5th round.

The following is a full listing of the performances in the 3 days of action for U12 to 19s.