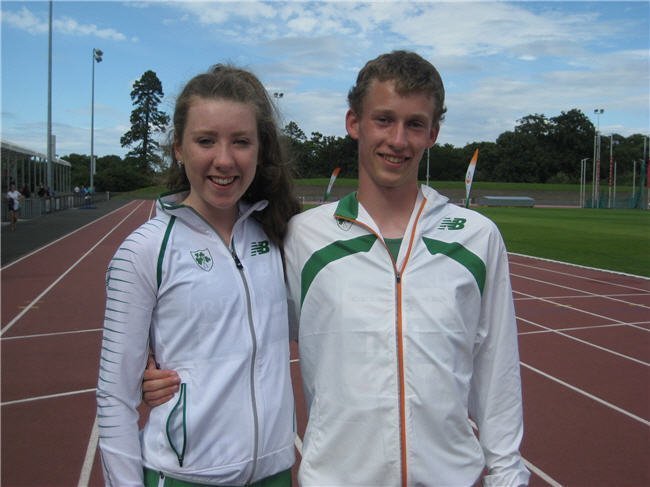 A belated report on the ‘almost final’ juvenile track & field action of the summer. Seven more National track & field medals made their way to the club on the final weekend of the National juvenile championships in Tullamore.

Sineád Treacy was the star performer with double silver in the U18 girls’ long jump (5.22m) and 200m (25.21s) while Conor Duggan added bronze in the U18 Men’s 200m in 22.65. Their performances earned both Sineád and Conor selection for the Irish team that contested the Celtic Games international in Santry recently against Scotland and Wales. It’s been a really fantastic year for both athletes with both featuring on the National podium multiple times, Sineád getting selected for 3 internationals and Conor making his international debut. Sineád’s achievements were magnified by the honour of captaining the Irish Schools team at the Celtic Games. The athletic club is immensely proud of both athletes. Both acquitted themselves very well at the international with Sineád placing 3rd in the U18 Girls 200m in a time of 25.47 and helping the 4x100m team to relay silver in a time of 47.12, while Conor helped the U18 boys’ team to relay silver in a time of 42.89 as well as taking first place in the invitational 100m. 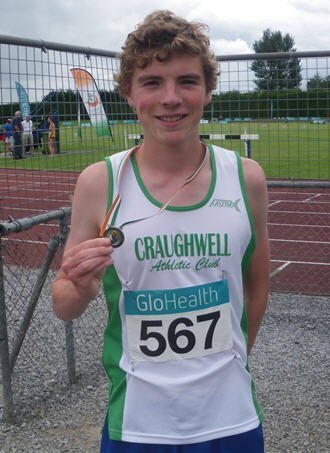 Back to the National championships in Tullamore, Jamie Fallon continued a fine year to take the silver medal in the U18 3000m in a time of 8.48.12. Jamie is going from strength to strength every year and there is a lot more to come from this fine athlete in the years ahead. Also in the medals, Michael Hand placed 3rd in the U14 Boys javelin with a fine throw of 31.73m having earlier placed 14th in the shot putt with 9.42m. Cian Waters put in a strong set of throws in the U15 boys shot putt with a best of 10.57m to finish in 11th place. The club had some super performances in the triple jump which claimed 2 medals with Matthew McKernan taking bronze in the U17 Boys event with a leap of 12.19m and Daniel Callanan-Forde jumping a fine 10.73m to take silver in the U15 grade. In the U14 girls’ high jump, Tara Slattery jumped a fine PB of 1.40m to place 8th overall while Eva Kelly placed 13th in the U13 girls with a jump of 1.20m. Shauna Tobin placed 12th in both the U15 girls discus (15.26m) and shot putt (5.90m) while Sarah Callanan placed 11th in the U14 discus with a throw of 15.19m. Aine Kelly leaped 3.80m in the U12 long jump to take 10th place. 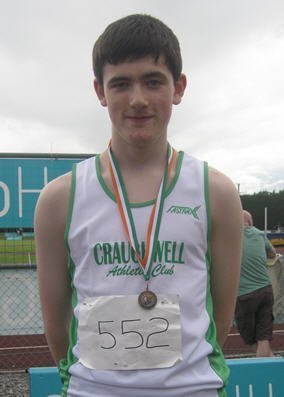 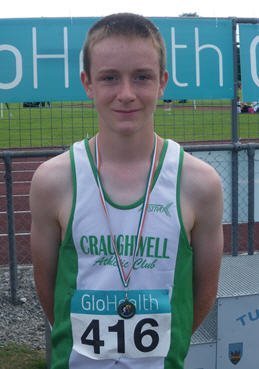 On the track Dearbhaile Walshe had a super run in the U16 800m to stay with the leading group for much of the race and place 10th in a time of 2.30.44 while John Cormican battled hard for a medal in the U19 800m final before eventually having to settle for 5th place in a time of 2.02.50 – an exceptional time given that John had to cut back on training due to the Leaving Cert. Oisin Lyons once again showed his tremendous talent with an exceptional 4.28.04 to take 5th place in the U15 boys 1500m. Grainne McDaid continued her return to top form with a 5:42.68 to take 10th place in the U17 girls 1500m while Damian O’Boyle was unlucky to finish outside the medals in a tactical U18 1500m where he placed 7th in a time of 4.08.53. Ultan Sheerin battled hard in the U14 200m to place just outside the final qualifying times with 28.75s while Michelle Duggan had a brilliant run in the U16 200m to make the final with a time of 26.48s but was unable to contest the final due to injury.