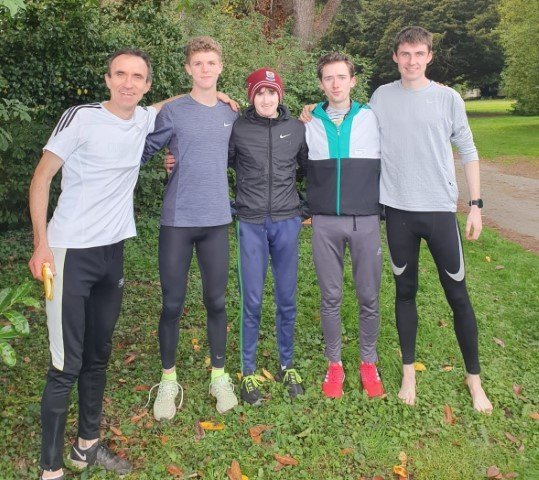 Marvellous Autumn Sunshine and cool fresh breezes bathed two of the finest cross country courses in Ireland – Abbotstown in Dublin and Bushfield in Loughrea as Craughwell AC sent teams out to battle on either side of the Country.

The Autumn Open held at the National Cross Country Course in Abbotstown is one of the premier Cross Country events in the Irish Calendar, second only to the National XC.  It is an unusual event in that the top Juniors, Seniors and Masters athletes in Ireland are all launched off together in a massive and frenetic start.  The Juniors running 6k (4 laps) and the Seniors/Masters covering 7.5k (5 laps).  Abbotstown was in good shape, aside from the hill up the back which was muddy and almost unending, dragging up about 400m in total I’d guess.  In each event, a top 6 position put you in strong stead for international selection. As a whole, Craughwell enjoyed our best ever day at the event on Sunday!

In the Junior 6km event, both of the lads had fantastic runs – the popular and talented William Fitzgerald who is just 17 cruised through the field, attacking the hill on each round and maintaining a strong pace throughout to finish a wonderful 15th position overall among the very elite under 20s in Ireland. This is the best ever Craughwell Finish in this event, and a fantastic breakthrough run for a smashing and talented athlete.  If William keeps this steady level of improvement, he can challenge for honours at this event in the future, I have no doubt.  Next home for Craughwell in another breakthrough run was 16-year old Kyle Moorehead in a superb 33rd place.  Kyle ran a big PB for his 5k of 17.30 on a muddy hilly cross country course, which gives you an idea of his pace. 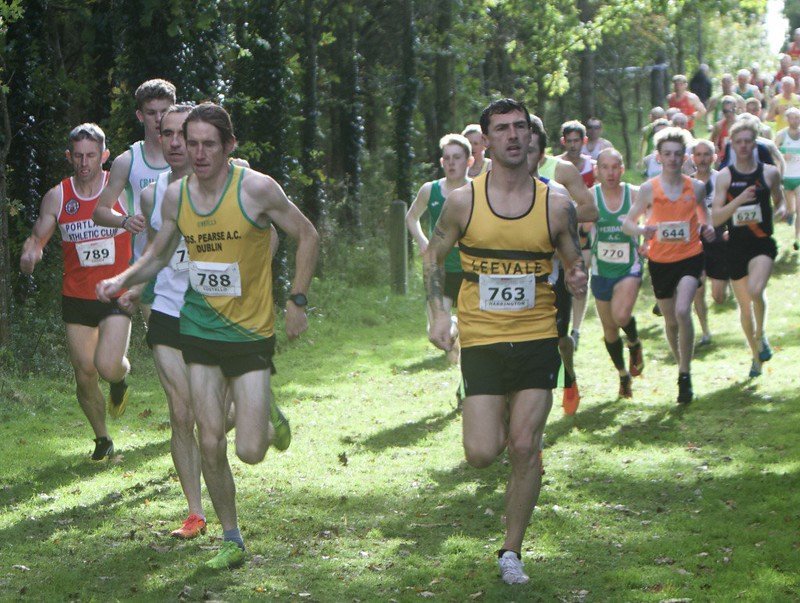 Spot the Craughwellites!  Mark, Kyle and Paul are in here somewhere

In the Senior/Masters 7.5k event, I achieved one of my goals for the year (lifetime?) by claiming 4th and a guaranteed spot on the Irish M45 team for the British and Irish Masters in England next month.  The warm-up races in Castlegar and Tuam where I suffered in the second half served me well and my strategy was to take it a bit easy for the first two of the five laps, especially up the hills.  A glance at the watch 500m into the albeit downhill start showed 3:04 per km so I put the brakes on a bit and settled into things, hoping that patience would see people come back to me.  One nice feature of this race is that the masters guys have their age category on their backs so it was easier to see who you were up against… unfortunately my eyesight is not the best so sometimes I chased a lad down to dissapointedly see that he was an M35!.  Anyhow as things went on, people did come back and happily for me, the hard work of the last 3 months paid off, job done, really delighted! :). 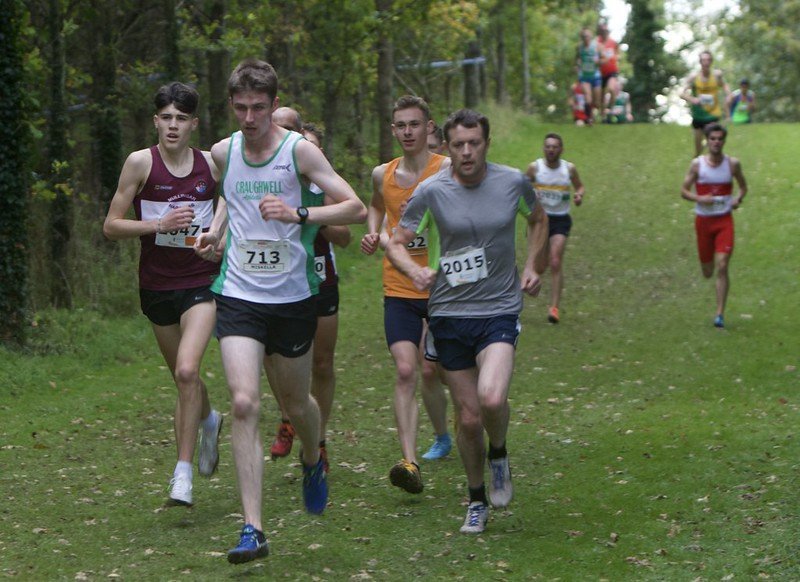 In the Senior event, Jack Miskella had a super run, taking exactly the opposite strategy of mine.  He headed out hard and hoped that pride would bring him home!  It did bring him home but the last lap was a character test I’d say!  He finished with a fine 38th position overall in the Seniors.  Paul Joyce had one of those days by his high standards, but ran bravely to finish in a very respectable 42nd position.  A lot more to come from Paul.. watch this space!

The event also incorporated an “Experience” event which was similar to a road race, and Sinead Gaffney ran the higher standard version as a good hard training run.  Sinead performed brilliantly to finish 4th in the race of over 300 participants!  Fantastic stuff Sinead – rumour has it this track specialist might actually be starting to get the cross country bug!

Bushfield was at its glorious best as the very best athletes in the County competed in the Even Ages Championships.  (I wasn’t able to make today’s event and am typing this report before the official results are out, so I might have some corrections to make – apologies if so – I’ll correct when I get them, also – if you have pics of anyone not below, please send on!!) 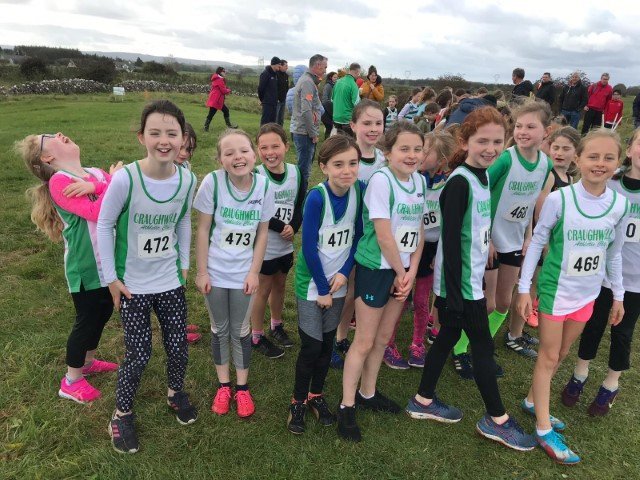 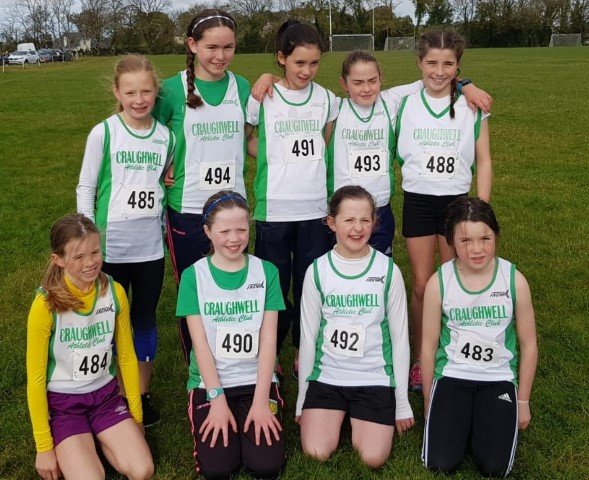 Again, the under 12 Boy’s team matched their female counterparts with a fantastic performance.  They were led home by Declan O’Connell in a brilliant 2nd position, followed by Stepen Ruane in 3rd and Keelan Moorehead in 4th. Cian Brady was in the top 10 and Jack Farrell was not far behind him! 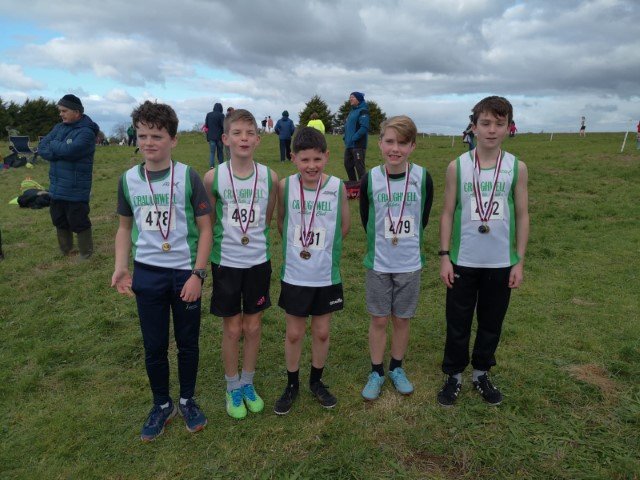 With the u14 Girls, Craughwell didn’t have a team, but Holly O’Boyle ran excellently to finish well up the strong field in 7th position.

In the u14 boys race, Mathys Bocquet put on one of his trademark displays of dominant front running to take GOLD by literally a country mile.  He was really not troubled from start to finish in the race, and all the early signs are positive for a smashing season from him.  Fionn Higgins and Sean Liston also ran strongly in the race.

Sadly, with girls athletics the numbers tend to drop off after Junior cert (especially in Connacht for some reason, something we need to work on!) so they combined the u16 and the u18 races into one 4000m event.  Combining them worked well as by all accounts the girl’s u16 race was one of the most exciting races of the day for the spectators!  The field soon split up as a leading group of four took out the pace in a chess match to see who could claim top position.  Emily Miskella (u16) and Emma Boyle (u18) were well placed in that top group of four but as they moved into the final lap the pace increased once more and Emily and another u16 athlete broke away from the group to make it a straight shootout to the line with 300m to go.  However, Emily is a smart racer and had saved plenty in the tank – as they rounded the corner she eased into the lead to claim the GOLD in a solid display of tactical racing, completing a Galway double for her with both the u16 and u17 titles.  Emily’s performance was enough to lead her u16 teammates of Clodagh O’Meara, Leonore Church, Siofra Davis and Allanah Grogan to a memorable GOLD, all of whom ran brilliantly on the day. 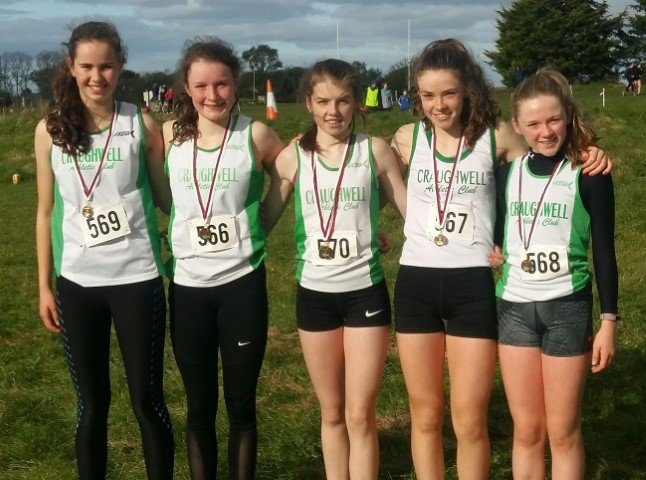 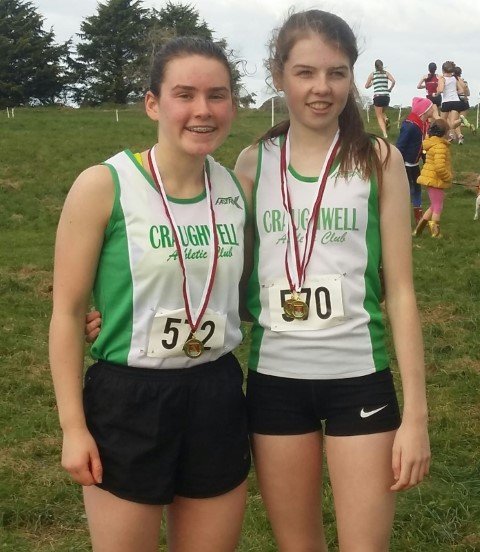 The next race up was the u16 Boys Race where Ross McGuinness was hotly tipped to reclaim his crown from last year.  Ross went to the front but was joined by another fine athlete from GCH new to the scene, and as the 4500m race came to a finish, Ross got pipped in the home straight in a good battle that can only help him as the season progresses.

Emma Boyle had a superb first outing in a good while to claim a smashing GOLD in the u18 girls in her first run for the club, hopefully the first of many successes for the popular athlete!

Luke Burke was the sole Craughwell Athlete, stepping up in the u18 Boys race and Luke performed strongly, winning Bronze in the u18 race.

In the men’s Intermediate race, David Evans had a super run, picking up hugely from his Tuam performance – as he says himself he is “still learning!” – aren’t we all!!  The women’s intermediate race had one entrant – fellow endurance coach Lisa Thomas donned the spikes for the first time since her childhood and did herself proud in the event.  She went out too hard (don’t we all!) but recovered strongly and has a base to build on!